Since arriving in New York City in the summer of 2009 on a scholarship from the Fulbright Commission for Educational and Cultural Exchange between Italy and the United States, Andrea Veneziani has been turning heads with his virtuosic command of the double bass. In addition to audiences at such clubs as the Blue Note Jazz Club, Cornelia Street Café, The Jazz Gallery, Shrine, Bar Next Door, Puppets Jazz Bar, Local 269, Caffé Vivaldi, Fat Cat, Cleopatra’s Needle, Smoke Jazz & Supper Club, Somethin’ Jazz Club, 5C Cultural Center & Cafe, Tomi Jazz, Tutuma Social Club, Garage, Smalls Jazz Club, ShapeShifter Lab, his admirers include many of the jazz faculty members at New York University’s Steinhardt Department of Music and Performing Arts Professions, from which he graduated in May 2011 with a Masters of Music Degree in Performance with a Concentration in Jazz. They include John Scofield, Ralph Alessi, Joe Lovano, Ralph Lalama, Peter Bernstein, Billy Drummond, Jean-Michel Pilc, Brian Lynch, Don Friedman, Andy Milne, Chris Potter and Kenny Werner, to name a few.

“Andrea’s music is very melodic”, says pianist Werner. “His playing is also from the heart”.

Besides being Veneziani’s former instructor, Werner is the pianist on Oltreoceano, the bassist’s remarkable debut recording as a leader. Rounding out the trio is Ross Pederson, one of the most swinging and sensitive young drummers on the New York scene. “Oltreoceano” translates from the Italian as “overseas”. The trio recording celebrates the challenging new music environment Veneziani, who had earlier performed only in Italy and other parts of Europe, has immersed himself in during his three years in New York.

Andrea Veneziani was born in Pescia, a small city in Tuscany, Italy, in 1977. His interest in music developed when he moved to Rome with his family in 1992. Here, he commenced his musical education, starting with the electric bass and playing every style of music with diverse bands. In 2004, he began with the double bass and pursued a further interest in jazz and improvisation as well as in composing and arranging. In Italy, he had the opportunity to study with some of the best Italian jazz musicians such as; Furio di Castri, Pietro Leveratto, Giovanni Maier, Enrico Rava, Fabrizio Sferra, Ettore Fioravanti, and in 2007 he received his Advanced Academic Diploma in Jazz with full marks from the Conservatory of Music “Licino Refice” in Frosinone.

In the summer of 2006 Andrea attended the Siena Jazz Summer Workshop, organized by the Siena Jazz Foundation, one of the most esteemed music organizations in Europe. Here, he had the chance to train with young musicians from all over the world and was awarded a full scholarship to participate in the 2007 edition of the seminar. He has also participated in the Umbria Jazz Clinics, organized by the Berklee College of Music in Perugia, Master Class for Jazz Orchestra Conductors held by Bruno Tommaso and Permanent Laboratories for Musical Research held by ECM recording artist, Stefano Battaglia.

Andrea is an active composer and arranger in many different settings, from jazz to theater and film music. In 2007, he won the Green Box Prize in Biella with his collaborative arrangement of Pagliacci by Ruggero Leoncavallo with Simona Ferrucci. In November 2006, he worked on the movie Piano, Solo, directed by Riccardo Milani, dedicated to the life of the pianist Luca Flores. In the summer of 2007, he recorded the soundtrack music written by Gian Piero Reverberi for the movie Amore Che Vieni, Amore Che Vai, inspired by the book Un Destino Ridicolo by Fabrizio De André and Alessandro Gennari. He also participated in several theatrical representations under the musical direction of Enrico Arias, such as Pazzo di Te in 2006 and Sweeney Todd in 2008.

In addition to having a number of private students, he’s currently member of the faculty at New York Jazz Workshop. During his studies at New York University he also served as an adjunct professor.

Additional to his musical skills, Andrea also possesses a degree in Sociology from the University “La Sapienza” in Rome, completing his thesis in sociology of music in 2003. Show less 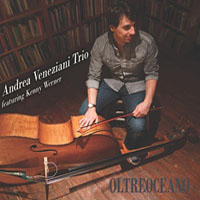 All About Jazz musician pages are maintained by musicians, publicists and trusted members like you. Interested? Tell us why you would like to improve the Andrea Veneziani musician page.