Jazz is an infinitely malleable art form, and Andrea Fultz may be the first vocalist to stretch the music in such a convincingly Teutonic direction. A singer who combines a thespian’s emotional resourcefulness with a jazz vocalist’s rhythmic flexibility, Fultz can infuse fresh drama to American Songbook standards, croon lilting bossa novas, and keep a dance floor gyrating with insinuating electronica grooves. But the Munich-born Fultz defines herself with The German Projekt, a tough, unsentimental new album that plunges jazz into deliciously dangerous waters.

More than a singular cultural synthesis, The German Projekt is a riveting musical journey that brings Fultz’s savvy jazz sensibility to the sardonic Weimar repertoire of Kurt Weill, Bertolt Brecht, Friedrich Hollaender, and Hanns Eisler. While jazz musicians have long embraced a handful of Weill songs (“Mack the Knife,” “My Ship,” “September Song”), Fultz delivers most of the music in German, setting the sturdy songspiel melodies to beautifully calibrated, jazz-infused arrangements. “It is a big thing for me to represent German culture in America,” Fultz says. “I really think this music is brilliant. Brecht and Weill and Hollaender are so timeless.”

The album’s only two English language songs offer a strong indication of Fultz’s thematic range. “Alabama Song,” the rollicking opening track, is a scorching, bluesy tune made famous in the 1930 Brecht-Weill opera Rise and Fall of the City of Mahagonny (where it was originally performed in Brecht’s idiosyncratic English). Many Americans discovered the tune on The Doors’ debut album, but in Fultz’s hands “Alabama Song” serves as an introduction to a topsy-turvy world in which the usual themes tackled by jazz singers��”the longing, euphoria, and bitterness inspired by romance��”give way to a much more expansive world of concerns.

Toward the end of the CD, Fultz delivers a defiant, spit-in-their-faces rendition of Brecht and Eisler’s “Song of a German Mother,” a gut-wrenching repudiation of fascism. In between, she delves into the bloody revenge fantasy of “Seeräuber Jenny” and detailed description of dissolution in “Bilbao Song.”

While steeped in the politics and anything-goes experimentalism of the Weimar era, The German Projekt was born far from Deutschland's soil, and that just might be the key to its exquisite balance. Working with some of the San Francisco Bay Area’s top improvisers and arrangers, Fultz honed a repertoire of classic German cabaret songs, embracing the genre’s inherent theatricality while interpreting the music with improvisational skills gleaned from some of the world’s finest jazz singers.

In many ways, The German Projekt reflects the hybrid nature of Fultz’s life and upbringing. Her father was an American serviceman on leave from Vietnam when he met Fultz’s German mother at Munich’s famous Hofbräuhaus. She spent part of her childhood in Oklahoma near her paternal grandparents, but then returned with her mother and older sister to Munich, where she soaked up German standards from the 1930s on the radio. “My parents lived in Oklahoma until 1973,” she says, “and I was born in Munich the following year [September 17, 1974], but we would go to Oklahoma on vacation.”

“We were listening to music all the time,” Fultz recalls. “It was mostly top 40, with some jazz, and the old German songs were always around. When I sing them, it goes back to my roots. My grandfather in particular would always listen to a show with lots of Weill and Hollaender. I would say all Germans have heard these songs a lot.”

Fultz demonstrated a gift for music early on, singing in school and church, and performing for eight years as a percussionist with a grade school ensemble. By her late teens, music had become an emotional refuge. Most of her family had returned to the U.S., and Fultz assuaged her loneliness by singing, eventually joining a four-part a cappella group, The Funny Valentines, that focused on American Songbook standards and World War II��”era pop tunes. “We gigged a lot,” Fultz says. “I had the lead part, and all of the sudden I had to learn 70 songs, ‘Cheek to Cheek,’ ‘Sentimental Journey,’ ‘Blue Skies.’ That’s how I learned the first jazz melodies.”

With her interest in jazz ignited, Fultz started attending Munich jam sessions and studying recordings by Ella Fitzgerald and other legendary jazz singers. At the same time, she was earning a master’s degree from the Ludwig-Maximilian-University in Speech Sciences, Special Education (Speech Therapy), and Psycholinguistics. While the program was more theory-focused than she was comfortable with, she ended up writing her thesis on the intrinsic connections between speech patterns and singing.

“I enjoyed the practical parts, how we communicate, and how to analyze ways of talking to each other,” Fultz says. “But I felt totally felt out of place there, and I was so happy to be more and more involved in bands. I joined a soul band, a jazz big band. At one point I had seven bands, and was getting much more into music than studying.”

After graduating, Fultz won a highly coveted spot in the jazz program at Austria’s University of Music and Performing Arts in Graz, performing a freewheeling blues at the audition that impressed a panel of judges led by Mark Murphy. During the year she spent in Graz she studied with Jay Clayton, Tom Lellis, and Sheila Jordan, but ended up deciding that she needed to go to the source, and in December 2002, she moved to the Bay Area to study. She credits Lorin Benedict for teaching her the intricacies of scat singing, and Madeline Eastman and Rebecca Parris for helping her deepen her improvisational skills.

After several years of scuffling and slowly making connections with Bay Area musicians, Fultz emerged as an important new voice on the scene. At the time, she had no thought of immersing herself in German music, and it was the Bay Area’s stalwart bassist/composer Marcus Shelby who sparked the German Projekt concept when he asked Fultz to sing some Kurt Weill tunes with his band.

“I had been writing my own material and singing Brazilian and American jazz tunes,” Fultz says. “Then Marcus asked me would you like to play some Weill stuff with me? I wouldn’t have thought of it on my own. I had been in the U.S. for three or four years. I was so far away from German culture that it was interesting again. Without him I wouldn’t have gone there.”

Once the flame was lit, Fultz found to her great delight and surprise that her musical colleagues shared her interest in exploring the Weimar material. Joined by violinist Dina Maccabee, accordionist Rob Reich, percussionist Micha Patri, bassist Eugene Warren, and ace pianist Adam Shulman, whose credits include gigs with Stefon Harris, Paula West, and Bobby Hutcherson, Fultz began to learn the material as an adult artist, fully situating the songs in their fraught historical context.

“The material was really completely new to me,” Fultz says. “I knew the melodies, but not all the words. The dark Weill stuff was very exciting. What made this possible was that all those guys are so interested in playing this music. It’s like an honor for them. They feel that as real jazz musicians, you need to know about this stuff.”

For Fultz, delving into The German Projekt has required facing Germany’s dark 20th-century history. The composers and musicians who created and introduced much of this music were forced to flee the country with the rise of the Nazi party. Rather than an exercise in nostalgia, the project is an homage to the bravery of artists who risked everything in order to pursue their musical vision. The resulting music is as beautiful as it is bracing, a powerful example of the way jazz can intensify a song’s emotional pitch without resorting to musical histrionics.

Since moving back to Germany in 2007, Fultz has continued to expand The German Projekt repertoire with new arrangements by leading Bay Area players such as pianist Graham Connah, bassist Marcus Shelby, reed player Mitch Marcus, and saxophonist Kasey Knudsen. At home with a wide array of material, she also performs in straight-ahead, Brazilian jazz, Latin groove, and jazz/pop contexts. But somehow, no material hits as deeply as the music from home.

“This music is about the context, it’s not about singing flawlessly or bebopping,” Fultz says. “It’s so different for me to sing in German. I can’t compare it to English or Portuguese. I can play with dialect, sing more northern or southern, or be a little more rude. It’s given me more freedom than any other music before.”  5/09

Andrea Fultz is the child of two cultures, and her music fully embraces both. Raised in Germany and Austria by her American father and German mother, she has spent a good deal of the last decade in the Bay Area, where she’s developed strong ties to some of the finest musicians in the region. A brilliantly expressive singer steeped in jazz, Fultz has honed a repertoire of tunes gleamed from 1920s to 1940s German theater and cabaret by songwriters such as Kurt Weill, Bertolt Brecht and Friedrich Hollaender, who had a highly successful career as a Hollywood composer particularly writing for Marlene Dietrich, after fleeing the Nazis.

Andrea Fultz is the child of two cultures, and her music fully embraces both. Raised in Germany and Austria by her American father and German mother, she has spent a good deal of the last decade in the Bay Area, where she’s developed strong ties to some of the finest musicians in the region. A brilliantly expressive singer steeped in jazz, Fultz has honed a repertoire of tunes gleamed from 1920s to 1940s German theater and cabaret by songwriters such as Kurt Weill, Bertolt Brecht and Friedrich Hollaender, who had a highly successful career as a Hollywood composer particularly writing for Marlene Dietrich, after fleeing the Nazis.

She presents her “German Projekt” accompanied by a supremely versatile cast of players, including ace pianist Adam Shulman, violinist Dina Maccabee, bassist Eugene Warren, drummer Micha Patri and Rob Reich on accordion. Many of the “German Projekt” songs were introduced by performers such as Lotte Lenya and Marlene Dietrich (both staunch anti-Nazis who fled Germany ).

Andrea Fultz has taken several interesting routes while deepening her musical approach. In the early ‘90s, while gigging around Munich she earned a master’s degree in speech sciences and special education from the Ludwig-Maximilian-University, focusing on the similarities between speaking and singing. After graduating, she moved to Graz , Austria where she studied voice at the University of Music and Performing Arts in Graz in a program run by the great jazz singer Mark Murphy. A regular presence in the Bay Area since the mid-‘90s, she has performed widely at clubs and jazz festivals around the region.

While several of Kurt Weill’s songs are deeply entrenched in the American Song books, Fultz is a leading force in turning these German standards into effective jazz vehicles.” 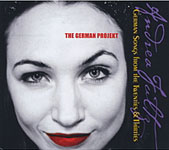 All About Jazz musician pages are maintained by musicians, publicists and trusted members like you. Interested? Tell us why you would like to improve the Andrea Fultz musician page.