Amy London is known and loved in New York City jazz and Broadway circles for her effortless sound, impeccable musicianship and depth of emotion. Her most recent CD on Motema, The Royal Bopsters Project, features a vocal jazz quartet with Ms London as the leader and soprano; Holli Ross, swinging alto; the legendary Darmon Meader, tenor; and bright newcomer Dylan Pramuk, bass. Together they arranged and recorded 12 songs, including 4 with the late bop master Mark Murphy, and one each with Annie Ross, Jon Hendricks, Sheila Jordan and Bob Dorough. This remarkable project received 4 and 1/2 stars in Downbeat, a video feature in the Wall Street Journal, rave reviews in JazzTimes and other jazz periodicals, and was on the Best CDs of 2015 lists of Downbeat, JazzTimes, All About Jazz and Talkin’ Broadway. The CD release event in September 2015 was celebrated by a sold out 6 night run at Birdland.

Ms. London’s two previous critically acclaimed CD’s on Motema as a leader, ‘Let’s Fly’ and ‘When I Look In Your Eyes’ feature some of the world’s top jazz musicians, and have led her to engagements in Russia, Italy, Turkey, France, Brazil, England, Belgium, Czechoslovakia and Canada, as well as cities across the US.

In addition to her crowning achievement as the lead singer in the Angel City Four in City of Angels, Ms. London has enjoyed a lengthy vocal group career. She began her choral jazz career as the middle voice in the Jazz Babies vocal trio, as Alto I in Vocal Jazz Inc., a vocal quintet that entertained children in the NYC public school system and as Soprano II in the renowned Trinity Church Choir.

Ms. London was invited to be the fifth voice with the Grammy winning New York Voices on Robert Lepley’s ‘Ancient Tower’ CD. She was also invited by Jim Snidero to be the vocalist on his ‘Jazz Conceptions’ singalong CD/book of 21 jazz etudes which has been used by jazz vocal students worldwide for 15 years, and she is the vocalist, along with Ella Fitzgerald, on the Scholastic animated DVD ‘Ella Fitzgerald: The Tale of a Vocal Virtuosa’. She originated the role of ‘Yetta’ in the 2009 world premier of ‘Meester Amerika’, a new musical based on Yiddish Theatre, which won the New Jersey Star Ledger 2009 ‘Tony’ award for Best Score. She has appeared regularly as ‘Mary’ and quartet soprano in Anne Phillips’ and Bob Kindred’s Christmas jazz celebration, ‘A Jazz Nativity’, sharing the stage with such luminaries as Jon Hendricks, Tito Puente, Lionel Hampton and Wycliffe Gordon.

As a jazz educator, Amy London has been teaching voice since 1984. She has been faculty at New School University’s Jazz BFA program since 1992, and is one of the principal architects of the highly successful vocal department there. In early 2014, Amy launched the Vocal Jazz Academy at Jazz House for Kids, in Montclair, NJ, at the invitation of Christian McBride and Melissa Walker. In the Fall of 2016, she will join the renowned vocal faculty of the BFA jazz program at City College, CUNY, NYC. She has also led vocal jazz workshops nationally and internationally, for the IAJE, JEN and a variety of summer jazz camps. Ms. London received her BA in Opera from Syracuse University, under the tutelage of bass-baritone Donald Miller, as well as vocal coaching at age 16 from Milt Wiener, the former music director of WLW radio in Cincinnati, who also coached Doris Day and Rosemary Clooney.

Ms. London is also in demand at jazz camps worldwide, and this summer, she is returning to Veneto Jazz Workshop in Italy, and Jazz House for Kids in Montclair, NJ. In a decade of jazz camping, she has been vocal jazz director at camps in Istanbul, Turkey; Veneto Jazz, Italy; St. Cezaire, France; Paraty, Brazil; Bar Harbor, Maine and Cabo Rojo, Puerto Rico. In Schroon Lake, NY, and Green Mountain College, Vermont, she directs her own camps, Amy London Vocal Jazz Camp. Show less

Amy London Will Celebrate International Women's Day With A Performance... 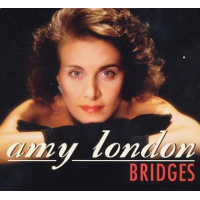 All About Jazz musician pages are maintained by musicians, publicists and trusted members like you. Interested? Tell us why you would like to improve the Amy London musician page.