Phil Sargent is a Jazz Guitarist and Educator based in Boston MA. 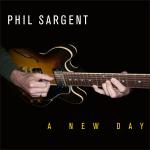 Phil Sargent made his professional debut at age 14 and has since worked with a number of prominent musicians including John Lockwood, Matt Wilson, Yosuke Inoue, Thomson Kneeland and others. He studied Jazz at the University of New Hampshire and has studied with critically acclaimed guitarists Ben Monder, and Brad Shepik. Phil leads his own group whose compositions draw from a variety of influences, most prominently the odd meters and eastern tonalities of ethnic Balkan music and modern jazz improvisation. Phil released his first recording (For Carl) with this group in April of 2002. In addition to writing for his own group he composes and is co leader for the genre bending groups, Iskar and Industrious Noise. Phil also performs as a sideman in the Sonic Explorers, Zumbao Trio and a variety of other ensembles ranging from straight ahead jazz to the avante-garde.