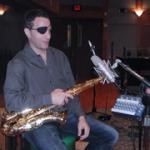 Dan Wilensky was born in Ann Arbor, Michigan, and moved to Berkeley the following year. Music was in the air at the Wilensky house: every family member played at least one instrument, and family jam sessions were frequent. He began piano lessons at age 8 and saxophone the following year after hearing the Duke Ellington Orchestra perform at Berkeley High School on a field trip. Wilensky flourished in the rich school music program created by Herb Wong, Dick Whittington, and Phil Hardymon, and also studied with BHS grad Steve Elson, and his teacher, Hal Stein. As a teenager, he street played, performed with schoolmates Benny Green, Craig Handy and Steve Bernstein, gigged with local bands, attended jazz clinics, won top honors in various competitions, performed at the Monterey Jazz Festival three times, and was a guest soloist with the Woody Herman Orchestra. When he was 17, he studied for a year with lazz legend Joe Henderson, and received a scholarship to the Eastman School of Music.

The summer after high school, Wilensky heard that Ray Charles was looking for a lead alto player for his big band. He auditioned, and got the gig. “Ray told me to be in LA on Monday. It was surreal,” Wilensky recalls. After six months with Ray, a brief stint at Eastman, and six months with Brother Jack McDuff, he moved to New York.

“It was like starting all over. I was street playing again, doing rodeos out at Nassau Coliseum, and playing funerals in the Village,” Wilensky says of his first year in the Big Apple. He recorded, gigged and toured with dozens of small groups, including Who It Is (with Cornell Dupree, Steve Gadd, Will Lee, and Richard Tee), Slickaphonics (featuring Ray Anderson and Mark Helias), Tom Pierson, Teramasa Hino, Scott Johnson, Peter Moffit, Tim Ouimette, Jens Wendelboe, Joe Locke, and Scott Hardy. In 1985/’86, Dan won a National Endowment for the Arts award for jazz performance and composition, played in Bob Fosse’s Big Deal (racing across town every night to play with the Playboy Club house band), and toured with Steve Winwood. Back in town, he played on numerous commercial jingles, film soundtracks and TV themes, and can be heard on over 250 records, including hits by Santana, Madonna, R. Kelly, James Brown, Janis Siegel, Hall & Oates, Linda Eder, Freddie Jackson, Faith No More, Mark Murphy, and Melissa Manchester, as well as more esoteric projects of all stripes.

Other career highlights include touring with Joan Baez as her pianist, performing in several videos and TV shows with David Bowie, Steve Winwood and and Prince protégé Martika, playing with Rick Derringer in the TV house band for Joy Behar’s Way Off Broadway, and gigging with Ben E. King, The Four Tops, The Temptations, Carole King, Cab Calloway, Darlene Love, and Aretha Franklin. Wilensky also performed extensively at many of New York’s legendary (and sadly defunct) clubs, including The Bottom Line, The Village Gate, Sweet Basil, Mikell’s, Seventh Avenue South, and The Lone Star Roadhouse, as well as larger venues such as Madison Square Garden.

“I started teaching when I was 15. One day I got a call from a nice woman who asked me if I would teach her son, Joshua Redman, because his father, Dewey, was living in New York. Dewey Redman was one of my favorite saxophonists, and I was flattered, but felt like I was way in over my head. She insisted, though, and I gave Josh his first five or six lessons. I’m sorry to report that he had a short attention span, no apparent musical aptitude, and very little interest in the saxophone. What a difference a couple decades makes!”

OK. This one goes under "House Party/Concert Way Back Machine." Cut to the cold cold winter of 1980 in Rochester, NY. I was starting my one and only semester up at Eastman after I had toured with Ray Charles. I couldn't wait to get out of the frigid North! My ticket arrived in the form of a fabulous band called Little Queenie and the Percolators (later becoming the Subdudes) based in New Orleans and on a mini tour to New York state. They needed a saxophonist for this leg of the tour, and I was recommended by a schoolmate. Our first gig was at the house party to end all house parties. First, it was a big beautiful house, packed with students, neighbors, fans of the band, and a few members of the press. It was snowing outside, and a different kind of snow was flowing inside. Lots of it. I mean, this WAS the 80's! Never my cup of tea, but on this particular night, the net result was 5 straight hours of incredible jazz/funk/zydeco/soul and one of the most enthusiastic and fun audiences I've ever played for! I was 18 at the time, and that night made such an impression that I've been trying to top it ever since! House concerts let the musicians, the audience, and the music achieve spiritual symbiosis. Incidentally, Little Queenie hired me for some more gigs further south, getting me out of cold Rochester, and jumpstarting a 30 year stay in NYC.