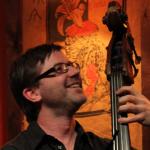 Craig Akin is an in-demand upright and electric bass player in New York City.  Between 1997 and 2007 he averaged 270 gigs a year in his musical hometown of Kansas City. There he developed his rhythm and tone while playing or recording with nearly everyone on the jazz and blues scene. Craig also had the pleasure of working with Tim Hagans, Pete Christlieb, Frank Mantooth, John McNeil, Dick Oatts, Karrin Allyson, Gary Foster, Bobby Watson, Dave Pietro, Claude Williams, Ken Peplowski, among others.

To continue his growth as a musician, Craig moved to New York in 2007. He honed his skills even further with the help of Jay Anderson, Scott Colley, and Larry Grenadier. Craig was thrilled to be able to study with legendary Miles Davis bassist, Ron Carter, for two years.

“Ron demanded high standards and accepted nothing less than perfection. With his experience and amazing ears I felt like I was under a giant microscope. Just being in his presence was inspiring. I walked away every time feeling recharged.” -Craig, talking about studying with Ron Carter

From jazz to pop, and folk to rock, Craig is comfortable and creative, and can deliver the goods like any veteran on his instrument.  He has performed well over 3,000 gigs and has now added home recording to his arsenal.