On the Street Where You Live by Callie Cardamon 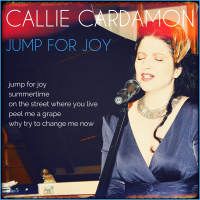 “Jump for Joy” is a small collection that refused to die. I started working on it ten years ago, as part of my second jazz standards album. (I had released “Easy Street,” my first standards record, in 2010). Things got in the way—family emergencies, money issues, musician issues, etc.—but the most unusual problem was that I had returned to my roots in folk-rock and was releasing CDs of “cosmic country” à la 1970s Southern California sound under the name C.C. Grace. I couldn’t find the artistic space to complete a jazz standards record, so these five songs were in limbo, waiting to be officially released. (There are some demos floating around.) I decided to release an EP so that these songs could finally be born! "On the Street Where You Live" snuck onto the collection. Although I l love the song, it wasn’t one of my all-time favorites. Still, I kept hearing different ways to phrase it until I finally had to record it. When I sing, I see little bursts of shapes in my head, which show me where the notes want to go, and I draw the shapes in the air as I sing (this passes for sheet music for a musician who has always played by ear!). This song has lots of strange little shapes that interest me.

Jump for Joy; Summertime; On the Street Where You Live; Peel Me a Grape; Why Try to Change Me Now