By CELESTE SUNDERLAND
January 24, 2009
Sign in to view read count

It became clear to me that I would never go back to playing ordinary jazz gigs. It felt like a risk, but I have never regretted it for one minute.

One September evening in 1987, Danish saxophonist Lotte Anker sat among the audience at the Cathedral of St. John the Divine at a tribute concert for one of her heroes, John Coltrane. Two things about that night stand out for her: the reverberation of sound in the massive space and the extraordinary playing of pianist Marilyn Crispell. Eight years later she saw the pianist perform again, this time in the more intimate setting of a club in Malmo, Sweden. "Sometimes you feel that you know the music and you could step into it at any time or you feel familiar with it in some way—the way they communicated." she recalled.

A decade later, Anker and Crispell found themselves playing in a Scandinavian quintet together, musically communicating in ways reserved only for those who have developed a true voice of their own. For Anker, despite a current schedule that includes tours with pianist Sylvie Courvoisier and electronics improviser Ikue Mori, festival appearances with saxophonists Tim Berne and Chris Speed, gigs with pianist Craig Taborn and bassist Gerald Cleaver and frequent concerts with the Copenhagen Art Ensemble, which she co-directs, it took a little while to figure out exactly which way her musical path would lead.

As a child, growing up in the countryside an hour north of Copenhagen, she played piano. But the music was classical and lacked the "weird sounds" that had come to intrigue her, so she started experimenting on her own. But when it came time for university, she enrolled as a literature major. And then, around age 20, she took a three-month trip to Peru. Unable to bring along her piano, she bought a flute. "That trip made me sure which direction I would choose. When I came home from Peru, I auditioned for the music university," she said.

She also went to a two-week music camp where she quickly traded her flute for a soprano saxophone. "At that time I was a big fan of John Coltrane and Wayne Shorter and I was just overwhelmed about how brilliant the sound could be." Tenor followed soprano and soon Anker was playing in a group devoted to free improvisation, a concept she found transforming. "Being aware that you can actually do that and that you need to know some things, but you are free to do it—that was a revolution in my head."

But back in the early '80s, she was still learning her way around the instrument and getting acquainted with the music, mostly by sitting in the audience night after night at Copenhagen's legendary Montmartre club. But something was missing. "I liked it," she explained, "but I had big ears for the more experimental stuff. At that time in Copenhagen there was a lot of music but it has always been more conservative than, say, Norway or Sweden."

When she saw German multi-reedist Peter Brotzmann play with Last Exit, things changed. "It was really loud, really ugly. There was this strange idea of not understanding it, but at the same time being really attracted to it." Two other local players, saxophonist John Tchicai and drummer Marilyn Mazur, also inspired Anker and soon, she was a member of Mazur's all-female music theater group Primi Band, which she calls a "female version of the Sun Ra Arkestra." Slowly, she started to "close her door to the typical jazz world." And in 1995, she formed an improvisation trio with bassist Peter Friis-Nielsen and guitarist Hasse Poulsen. "It became clear to me that I would never go back to playing ordinary jazz gigs. It felt like a risk, but I have never regretted it for one minute," she said. 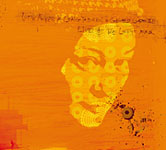 A trio of albums released recently attest to that devotion. Live at the Loft (ILK Music), her second album with Taborn and Cleaver, after Triptych (Leo), analyzes sound to a point where each note takes on a profound level of intimacy. Throughout the hour-long disc, Anker's control over each phrase is palpable, revealing a masterful ability to balance sound and silence. "One thing I recall when playing with Lotte is how far into silences and the unknown it is possible to go and trust that she is actively aware and engaged in the music-making," said Taborn. "I remember a performance where the trio had deconstructed a certain kind of gesture to the point where the silences were so intense and the spaces between sounds so wide that it was not easily discernible if we were still playing or if the music had stopped. And at one point Lotte began playing an almost-melody. Not a fully stated one but just these sonorities that implied melody and it had the effect of focusing that entire space. This was a very brave thing to do, especially in the context of that kind of music because it was not explicit, but also not so abstract as to be trying to defy or deny the spaciousness that was occurring. It was such a perfectly beautiful and subtle assertion of voice."

Anker lends that masterful assertiveness to the debut album of a former student, Danish pianist Henriette Groth. Du Fugl (ILK Music), which means "You Bird," pairs Anker's soaring melodies and jittery proclamations with Groth's thoughtful statements in a pleasingly communicative duo setting. But the most striking of Anker's recent releases aligns her wonky trajectories with the soft, glistening piano of Courvoisier and the metallic shattering and microscopic glitches of Mori's electronics. Filled with those "weird sounds" she was so fascinated with as a young player, Alien Huddle (Intakt) presents a trio of musicians, well established in their own individual modes of expression. She also finds that playing with electronics creates a more ethereal atmosphere. "It's not so physical," she explained. "When you play with acoustic instruments you have a reaction which is right there, but with electronics the reaction is slower. Once you are used to that then it's interesting because you have to try to match that sound."

This is a concept she's able to further explore through composing, a process she links to the abstract imagery of moving bodies. But words have also inspired. She recently completed a work called "City of Glass" a two-hour concert for the Copenhagen Art Ensemble based on texts of American author Paul Auster. "I started to hear melodies in his work," she said. "The rhythm in his writing is very musical." She has written over a dozen pieces for the 12-piece group, an ensemble that realizes Anker's objective of linking composed music with improvisation and she hopes to one day make a recording of "City of Glass". Though the studio expense seems nearly insurmountable, Anker isn't one to give up, in music or in the occasional obstacles of life. "She has a very immediate connection to her intuitive faculties. And she trusts this connection," said Taborn. "She has an absolute conviction and faith in the process of improvisation and the ability of her deeper self to guide her through any circumstances."