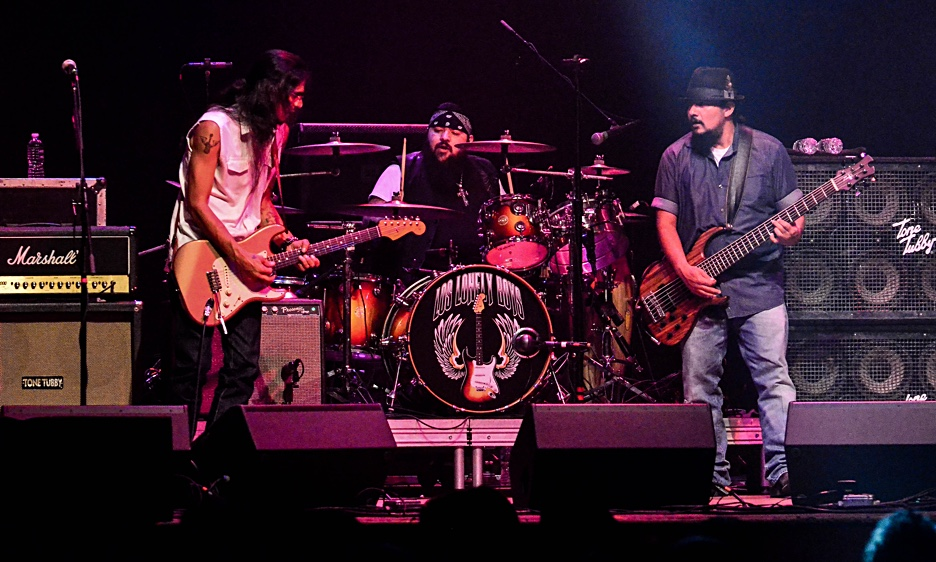 By MIKE PERCIACCANTE
May 4, 2019
Sign in to view read count
Los Lonely Boys and the Gary Douglas Band
The Space at Westbury
Westbury, NY
April 20, 2019

As bandmates and actual brothers, they have stuck together through thick and thin. The highs have been very high, such as their self-titled major label debut album (Epic Records/Or Music, 2004) selling over 2.5 million copies and featuring "Heaven," a Grammy-winning Best Pop Performance single and number one hit. The lows have been quite low, for example in 2013 when Henry was seriously hurt falling from a stage and lesions on Jojo's vocal cords stopped him from singing for months. Los Lonely Boys had to cancel 43 shows and was forced to delay work on their album Revelation (Blue Rose Records, 2014).

In addition to "Heaven" and "Solid Ground," Los Lonely Boys' catalogue includes "Señorita," "Onda," "Diamonds," "Outlaws," "Home," "Blame It On Love," "Give A Little More," "Roses" and impressive covers of Santana's "Evil Ways," The Doors' "Roadhouse Blues," The Beatles' "She Came in Through the Bathroom Window," John Lennon's "Whatever Gets You Thru The Night" and Creedence Clearwater Revival's "Born On The Bayou."

On a Saturday evening at The Space at Westbury, Los Lonely Boys and the Gary Douglas Band treated an enthusiastic Long Island audience to a wonderful night of happy and brawny rock 'n' roll.

Douglas and his cohorts were on first and did not disappoint. The Gary Douglas Band is led by a Long Island-born and bred rocker who favors cowboy boots and Southern rock-flavored anthems. Douglas is also a Trial Lawyer Hall of Fame attorney who fights for workers' rights. The seven-member band comprises Douglas on guitar and lead vocals, Jeremy Goldsmith on guitar, Nicolas Biello on reeds and keyboards, Dan Asher on bass, Tom Curiano on drums, Sebastien Ammann on keyboards and Jessica Antonette on backing vocals and acoustic guitar. The band's latest CD is the independently released Deep In The Water (2018). The band's strong half-hour set included the title track from that album as well as a rockin' version of "River Road," "Nothing Ever Goes As Planned" and "Wild Child."

After a short intermission, Los Lonely Boys stormed the stage in true power trio fashion. They delivered an explosive, greasy and gritty Latin-flavored version of "Born On The Bayou" that brought the crowd to its collective feet and had them dancing in the aisles. They recorded their version of the classic song for the Quiero Creedence (Concord Records) compilation in 2016. That night, the band truly made the song their own—changing the lyric in the final chorus to "born in el barrio."

The Garza brothers then shifted into a higher gear and delivered a tight, fun set that kept the attentive crowd dancing the night away while enthusiastically applauding and appreciatively whooping after each song. Highlights included "Blame It on Love" and "So Sensual" (both from Revelation), the jamming call and response stream of consciousness "Que Pasa"—during which Henry and Jojo danced and let their hair down—"Oye Mamacita," "Friday Night" and, of course, the show's closer "Heaven."

The three musicians spent the evening smiling and playing their hearts out. Jojo's vocals were spot-on. He was also a perpetual motion machine marching, dancing to the beat and laying down a funky rhythm with his six-string bass. Henry's tasty guitar and soaring leads gave the songs depth and body, while Ringo's powerful drumming provided the backbeat and the soul that made each song special.

Los Lonely Boys' joy and their love of playing were evident as they harmonized, blended rhythms and fed off the audience's kinetic energy. The crowd sang along, especially on "Heaven," and had a grand time celebrating life on a night they'll remember for some time.