By NENAD GEORGIEVSKI
December 29, 2012
Sign in to view read count 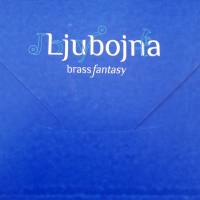 With Ljubojna Brass Fantasy, Ljubojna exceeds the exceptionally high standards it has set for itself. For this occasion, that band leader/ bassist Oliver Josifovski has completely changed the concept of the band by using a huge brass orchestra instead of the regular band for a collection of traditional Macedonian songs, only this time coming exclusively from the region of Aegean Macedonia (today's Northern Greece). Experimentation or taking chances with arrangements is not something new for this group or its bandleader. As a group, Ljubojna has built its musical approach mostly upon this constant creation of musical and vocal friction or the kinetic energy that comes from singer Vera Miloševska's unmatched capabilities and the potent cocktail of the group's excursions into different strands of Macedonian traditional music. Previously, Ljubojna took on the folk songs in its repertoire, with chalgia music arrangements infused with various subtle and not so subtle influences and sounds, but this has completely changed its sonic identity.

With the popularity of Balkan brass bands, especially with the success of composer Goran Bregovic's soundtracks and his Balkan amalgamations, plenty of those groups sprouted up like mushrooms after a spring rain, taking on brass music but often with mixed results. While some bands—the most popular being Boban Markovic's orchestra, Fanfare Ciokarlia and the Cherkezi and Kochani Orchestras—have excelled in this genre, most of them are just pumping high volume funky music, played at breakneck speed with tireless energy, but with no real or significant substance. Most of them are just crowd-pleasing clowns.

Ljubojna's Brass excursion is another high point within this genre—even though, for this occasion, the group has recycled some of the songs that were already popular in its repertoire. Some of these songs were already covered by the band on record, like "Krena Martinata" and "Tvoite Ochi Leno," or were performed in concert and can be heard on the live Ljubojna in Life (Life Magazine, 2011). Nevertheless, these songs have never before been performed with these arrangements, and feel more at home than the group's previous takes. What distinguishes them are the songs' own merits—the characteristic, soulful and playful melodicism, and the rich display of uneven rhythms upon which these melodies are based. They are little-known, or have become better known in recent times in either the world music circuit or the general public.

The songs from this region are characterized by their slight Mediterranean feel and the use of pentatonic scales that are absent or rarely present in the traditional songs of Vardar Macedonia (the region of today's Republic of Macedonia). Another characteristic is the marching orchestras, as these songs were typically performed by orchestras roaming and playing in the streets for weddings or other celebrations, or were sang a capeplla. A unifying subject theme for this collection of songs is that all of them are love songs and "Sevda" is the word that denotes the longing in which these songs are immersed. "Saudade" is the word used to describe this sentiment in Portuguese Fado.

Since the band's first recording, Parite se Otepuvacka (Bajro Zakon Korporeshn, 2005), Josifovski has expressed his point of view with great clarity by drawing out the best from his musical partners while keeping a firm hand on the till. But on Ljubojna Brass Fantasy he is after a greater spirit of collectivism. In that respect, much in the appreciation of the players' unique voices on their instruments, Josifovski sets things in motion and stands back to admire the wonders that the musicians can create from the arrangements he has provided. Unlike previous recordings, he does not playing upright bass at all, but simply a snare drum—instead, acting more like a conductor.

There are few things that can match a brass band in full flight, but Ljubojna provides thoughtful, dynamic and simultaneously sensitive accompaniment for singer Vera Miloševska's unique take on these songs. Miloševska is once-in-a-generation singer whose voice mirrors and wrestles with the brass orchestra's lushness, as well as the songs' yearning desire. In a way, with Brass Fantasy, Ljubojna provides a sumptuous tour of the band's 15-year history, as these are the songs that were mostly present in its normal repertoire. On the whole, it is both exciting and colorful.