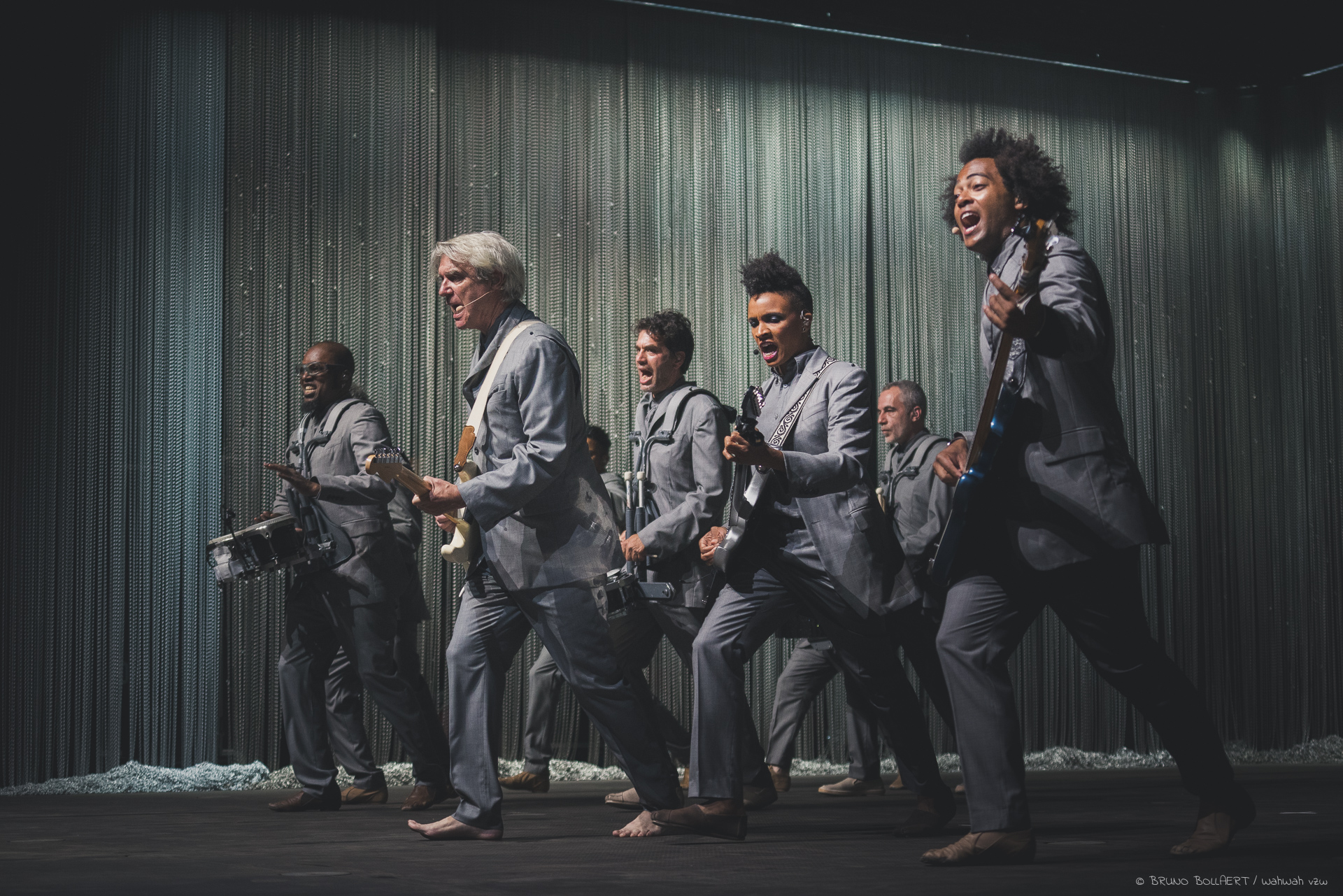 As each show piles up, on this year's seemingly eternal David Byrne tour, we can relish the wonderment of extreme precision, of rehearsals that become daily life. Conversely, as the old Talking Head rolls off, planning to compete with Bob Dylan, his stable ensemble can surely begin to relax into the improvisatory zone, confident in their overall precision. As long as the dozen minstrels don't bump into each other, whilst bouncing across a clear-space stage, (almost all) barefoot and uniformly garbed. The show looks partially chaotic, but to coordinate all of these band members, responsible for carrying their unplugged wireless instrumental luggage, there has to be an exact book of rules, a map for the partying free-form zig-zagging.

Even within the space of an almost-fortnight, there was visible intensification. It was rather edifying to catch a pair of gigs in relatively speedy succession, noticing not only the linear improvement, the runaway meshing, but also the ways in which a similar concept can become an altered entity, depending upon its setting.

At Symphony Hall, in Birmingham, sight-lines were excellent, as this is a refined concert space, all wood and tiers, with a low stage that most folks are looking down upon, with few obstructions. Here, it was easy to appreciate the full simplicity of Byrne's architecture, assuming that a surround-square of spangly, baubled strands, like the longest of greasy tresses, can be termed 'architecture.' All focus is on the artists, as they strut and file, parade and circulate, break up into shrapnel, or collide into a flesh-hill.

The idea (with regular Byrne choreographer Annie-B Parson) emerges from the street band tradition, mostly Balkan, Brazilian or New Orleans, but sometimes military or school band inclined. The majority percussion faction are the most radically mobile, but it was also amusing to see a horizontally-hung keyboard, not a keytar, along with the geetars. Byrne prefers to mostly sing, without the encumbrance of an axe, but when he does don an electric guitar, it's to provide some of the most thrilling stretches of the shows, his rationed, angular solos being the most unpredictable sonic element of each set.

To begin, Byrne was alone with his brain, singing to it whilst sitting at a table, before his musical cohorts steadily invaded the floor. There were guitar and percussion solo features amongst the ranks, and exuberant group vocals, sometimes leading to a focus beyond Byrne. The kind of moves that looked more like wired neurosis when he was younger now take on the manner of a senior citizen aerobics work-out in some residential home for eccentric artists. Still strange, but in a hop-to-the-side fashion.

It's got to be stated: the material from the latest American Utopia album doesn't fare as well as the golden chestnuts from the prime funk period of Talking Heads, or the early Latinised years of Byrne's solo career. Some of the songwriting tics employed are now veering towards a limitation of melodic traits, and a tendency towards beseeching ballad tones. We couldn't escape the lure, the crucial twitchiness of classic ditties such as "Burning Down The House" and "I Zimbra," or the absolute super-funk that inhabited the still totally un-dated Remain In Light album.

When it came to the show at Bijloke, on the opening night of the Gent Jazz Festival, another manifestation turned the performance into a more 'conventional' gig scenario. This was an all-standing set-up in the main marquee, filled but still relatively intimate. So much so, that when a few stupid punters started to throw small items onto the stage, Byrne became stiffly serious, warning of an impending cease-fire if they didn't behave themselves. Being barefooted on a completely swept and polished stage will make a man like that!

Here, the sound system was powerful, bassy, clear and punching, and the close-to-midnight crowd were geared up into partying mode. This added a palpable frisson of energised crackle, even if the visual niceties of the show were less clear, even for those of us standing quite close to the front. At this stage of the tour, we could marvel at the connections already being made within the ensemble, like a Broadway cast forging glittery bonds, night after night. The show will continue close to year's end, re-visiting cities already played, graduating to larger venues. The positive word has clearly circulated, and Byrne might only be able to stop when he reaches the unlikely state of exhaustion...