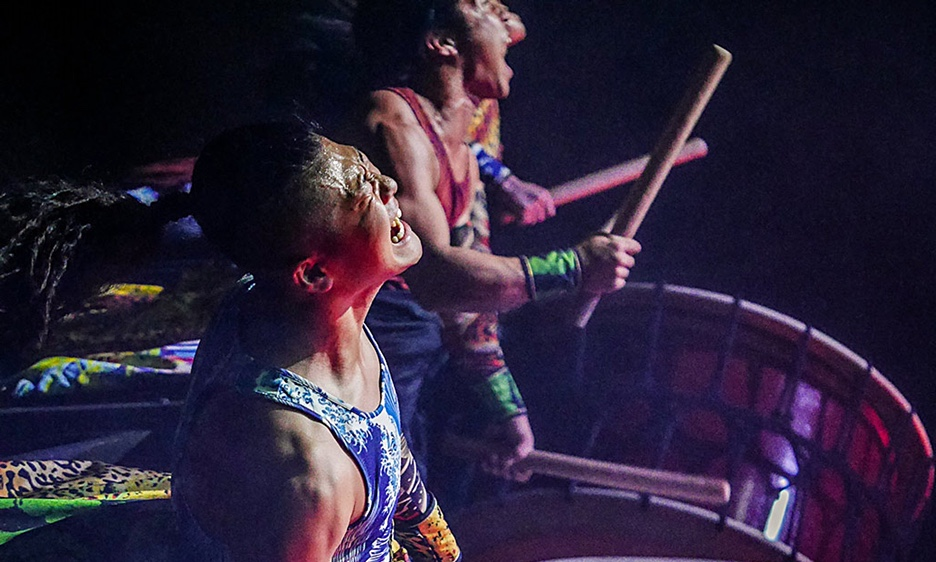 The Yamato Drummers Of Japan tour regularly, a less august crew when compared to the old guard Kodō clan, more attuned to a modernised visual sense that makes their relationship with the taiko form less hardcore. Not that their drumming impact is much lesser: it's just that they travel beyond sweaty loincloth monomania, favouring the trappings of dance production or a rock show. Even so, Yamato's history stretches right back to 1993, whereas Kodō came together in 1981, so there's not a massive difference between their longevities. Taiko (or wadaiko) involves a highly disciplined ensemble spread, of variously sized drums, from tiny treble rattlers up to monstrous bass barrel behemoths, played with baseball bat-sized sticks.

This swift return chased Yamato's 2017 gig in York, and they had doubtless encircled the globe thrice during that period. Four lantern-bearing players paced slowly around four medium-sized drums, with one massive brother squatting high to the rear. Group vocalising built a dramatic mood, gong caressed, and a solo female voice joining for this opening to "The Passion." The full 10-piece ensemble weighed in, decorated by flute trilling and doubled three-stringed shamisen picking. Yamato pay close attention to choreography and lighting, creating a multi-dimensional experience, with liberal humour when compared to taiko's accustomed stern aura. Much was made of manufactured conflicts: although jokey, these 'tensions' became a touch tedious when dwelled on at length. Duelling drums dominated, as an obvious way of prompting a steady escalation towards organised thunder. When the humour paused, the five strongest sticksmen sat in front of their huge barrel drums, invoking ritual correctness, and attacking with a stunning martial ferocity. War-like cries signalled each renewed explosion of intensity, for the full heavens-sundering release.

Formed the year before Yamato, in 1992, the Ensemble Bash foursome are a very different kind of percussion team. For almost three decades, they have been consistently dedicated to a new music repertoire, often commissioning tailored works, and utilising a wide range of instruments, from conventional drumkits to triangles, and from marimba or vibraphones to bongos, congas and gongs. The drumming of West Africa has been a strong influence, but it's clear from Bash's playing that other forms have made their mark, including rock, jazz, improvisation and minimalism. Indeed, this gig, opening the 2019 season of York's regular Late Music series, included works by Keith Tippett, David Bedford and Stewart Copeland. All concerts take place in this chapel, which immediately gave the Bashers ample room to arrange their truckload of gear.

Prior to the performance, composer Roger Marsh gave a brief talk, introducing his Late Music commissioned piece, "Huddle," which was to be given its premiere. He talked about 'fashion' within the composing-for-percussion scene, how in the old days they used to mostly require a lone performer to straddle a massive spread, leaping from one instrument to another, in a virtuosic display of athleticism. Marsh observes that during the last two or three decades it's been okay to get smaller, more focused, and with a greater importation of eastern values, incorporating the language of Japanese, Indian and Korean drumming.

Richard Benjafield was a founder Bash member, but returned early in 2018, after an absence of 16 years. Catherine Ring also joined the remaining old hands, Chris Brannick and Stephen Hiscock, at around the same time. All four strode onstage, completely possessing the altar area, emanating a confrontational energy that didn't disperse or wane throughout the entire two-set show. Perhaps 'communicative energy' would be an equally appropriate description. Unlike almost all classical and/or new music gigs, the Bash crew made a point of informally introducing each work, shading in some background before we heard each piece. They also enjoyed a dark, satirical sense of humour, particularly Hiscock, who could have an alternate career as a deadpan stand-up comedian.

Amusingly, the Bashers warned that we could tear up our programmes, as they'd decided to switch the running order, and also add a few unlisted pieces. Most of the composers included were English, but there were also a few Americans in the book. The opening number (probably Stephen Montague's "Rimfire") was the only one missing a verbal briefing: a cycling of rotational, minimal hits, with chirping vocalisations, density, speed and cowbell parts increasing into a taiko-esque flood of rhythm. Voice signals heralded a regrouped onslaught before its finish.

Graham Fitkin's "Shard" featured prominent triangle and rippling marimbas, whilst Howard Skempton's "Slipstream" had vibraphone, glockenspiel and cymbal shimmers, involving a creeping opalescence. A surprise appearance of Steve Reich's "Typing Music" (one of his rarely performed pieces) was led by Hiscock on a disconnected old Mac computer keyboard, with intoned text, clapping, and a pair of woodblocks. It was a curious separated showing of this introduction to The Cave.

Bash are frequently vigorous in execution, but a Ghanaian section had Brannick playing the gyil (wooden xylophone), partnered by paired metal clavés and a shaken shekere gourd, with a djembe drum coming in to climax. This took the intensity up to an even higher level. "Dance Play," by Nick Hayes seemed to have a hidden free jazz root, with vibes, glock and drumkit forging an abstract flow, a malleable time-pulse.

By then, we were in need of Peter McGarr's "Sound Asleep," a disorientating underwater experience of mysterious aural displacements, harmonising toy saxophone, tubes, flamenco stances, steel pan, cuatro and a pair of music boxes. Bowed vibes and bells made a musical miasma, gong rack, egg slicer, rubbed glass rim and hymnal song were just some of the crafty matchings made.

The most direct, linear piece was Stewart Copeland's "Breather," boasting a strong tune, and a funky progression, with marimbas, glockenspiel and drumkit. Keith Tippett's "Dance Of The Dragonfly" was the evening's longest work, and a quite remarkable departure into its own world. The Bashers sat closely together, as if embarking on a ritual invocation, with steel pan, marimba, goblet drum and cajon, all delicately caressed, making rivulets of silent time in a middle section, very precise in its scampering sensitivity. Bash carefully consider their pacing and pauses when programming a concert. Another ceremonial aura existed during the almost-encore of David Bedford's "Bash Piece," serene with its steel pans laid out on the floor, four hands playing on each. This was one of the best new music gigs (and presentations) seen and heard in a long time.

Coming down from Scotland, where they run a dojo, the Mugenkyo group have been spreading the taiko experience around the UK and beyond for 25 years, always with a healthy degree of verbal explanation acting as a point of reflection in-between their heavy drumming stretches. Their latest programme is The Way Of The Drum, but though the framework might change, each show tends to demonstrate similar core practices of the taiko form, moving between subtle breathers and full- power, endurance stick-wielding.

Whilst Kodō present a more 'purist,' stern and rigorous vision of the tradition, and Yamato offer a choreographed entertainment spectacle with increased humour, Mugenkyo specialise in a vantage point from outside the 'authentic' Japanese perspective, deeply immersed, whilst concentrating on educational aspects. Music is still at the centre of their performances, and humour is also present, but with a sharper British cut. As a five-piece, their manifestation of the tradition is necessarily less bombastic, and also less directed towards feats of extreme fitness. Whereas Yamato used a full spread of gargantuan drums as their backdrop, Mugenkyo carry a much lighter skin-only version at stage-rear. They have a more thoughtful, distanced stance, but also embark on set-pieces of exuberant demon-masked dancing-in-character folkloric displays. Mugenkyo feature additional spots with a smaller, trebly drum-hail, and a solo shakuhachi flute, finding ways to work successfully as a compact, mobile group.