LiV Warfield At the Iridium 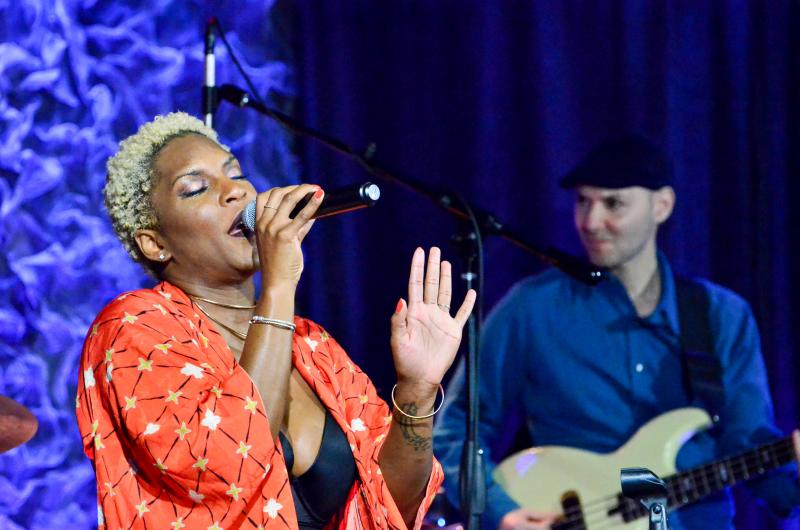 Once upon a time LiV Warfield was a backup singer. That's not a condemnation. That's a fact. And, it's not a bad thing. Once upon a time Tom Brady was a backup quarterback. That is also a fact. And, no matter how you feel about Brady, you cannot argue with his four Super Bowl championships. It has worked out pretty good for Tom Brady. When one hears the name Manning, Peyton is almost always the first thing that comes to mind, yet up until the 2016 Super Bowl, Eli Manning had won more Super Bowl championships than his big brother, Peyton. He was overshadowed, yet he had led the New York Giants to more than one Super Bowl victory. A little secret, Peyton has lost more Super Bowls than Eli. Peyton has lost two. Eli has never lost a Super Bowl. He won each time he made it to the "big game." In Super Bowl games, Peyton has gone 2-2, while Eli is 2-0. It would be an understatement to say that it has worked out pretty good for Eli Manning. It just goes to show that in many cases being a backup isn't a bad thing. Neither is being overshadowed. Being overshadowed by another doesn't make the overshadowed person any less of a talent. It just makes them less well-known.

LiV Warfield spent a good amount of time performing, in anonymity, as a member of the New Power Generation as one of Prince's backup singers. At present, hers is not the first female singer's name that comes to mind when someone utters the phrase "Prince protégé." Perhaps its Appolonia. Perhaps its Vanity that pop into people's heads. Maybe Shiela E comes to mind. Wendy & Lisa might be the first thing that certain people think about. All make sense. However, none of those performers have the powerhouse vocal chops of LiV Warfield.

During the early show at the Iridium on a cool Saturday in late February, Warfield and her band appeared on stage with little fanfare. The lights in the small, but fabled club had barely dimmed when Warfield's guitarist, Ryan Waters, picked-up his instrument and began strumming his guitar. He slowly built the tempo and soon was joined on stage by Warfield. Warfield appeared wearing a short black dress which she accessorized with a bright orange shawl/robe. When she began to sing, there was an audible gasp from the audience. This was a bit of a surprise because Warfield was headliner, there was no opening act, and the crowd was clearly there to see her. But her voice is an amazing instrument which can surprise even her most hardcore fans. Soon the rest of the band took their places, settled in and accompanied her on "The More Things Change, The More They Stay The Same."

Following the first of many ovations, Warfield addressed the crowd. Ever the good, yet humble hostess, she said, "Hello. Welcome. Thank you for coming. I'm excited to share this evening with you guys. So, now that the soundcheck is over..."

What followed was a fantastic version of "BlackBird" from her 2014 NPG Records release The Unexpected. The evening's format was set. Warfield would perform a song then take a moment to tell a story either about the song she had just sung or about the next gem that she was about to pull out of her bag of tricks. The ritual was repeated as she sang stellar versions of "I Decided, " "Soul Lifted," "Don't Say Much" (which Warfield explained would be performed with a slightly different spin than the version release on The Unexpected) and a new one called "I Ain't Giving Up."

The joyous confident and engaging performance had it all—rock, pop, R&B, soul, gospel, blues, funk and, pop—virtually every musical genre imaginable. And the stories were wonderful. Warfield opened her soul and let the audience in. Her stage banter seemed more like a conversation with a girlfriend, rather than with a room full of fans. At one point she sat down on a chair at the front of the stage and quietly stated, "My sound has changed from Embrace Me (B&M Records, Inc., 2006) to The Unexpected. I love Rock 'N' Roll. It's what I do. It's what I need to do. This is one of my favorites." As the last word was uttered, she stood up and her band launched into a killer version of the Rolling Stones' "Gimme Shelter" that was so good, Jagger & Richards, themselves, couldn't have done it any better. The show continued and Warfield offered up "Waiting" which she said was inspired by Sade...and to prove her point she did a wonderful cover of Sade's "Love Is Stronger Than Pride." The performance ended with "Loving You Makes Me Crazy and a tour de force version of "Why Do You Lie" (which differed from the studio version due to the lack of horns, but was no less powerful) propelled by Walters' soaring guitar the driving keyboard work of Nick Semrad and the amazing syncopation provided by the bass and drums rhythm section of Jonathan Maron and Taron Lockett.

It was a soul-stirring performance, a concert to be remembered for years to come by those lucky enough to be present. Many audience members were heard inquiring about the availability of tables and seating for the late show. Warfield who had spent the evening feeding off her own energy and that of the crowd was clearly in the zone throughout the night. At the end of the show, when the lights were coming up, she thanked the audience and made it a point to announce that copies of The Unexpected would be available at the back of the venue at the bar and that she hoped "everyone will stop by."