By DAN BILAWSKY
September 16, 2014
Sign in to view read count
The Standard Bank Young Artist Awards program has been shining a light on some of the best and brightest South African up-and-comers in music, drama, dance, film, and other art forms since 1984. Almost from the start, and for the two decades that followed, music was simply represented with one umbrella category when these awards were given out, but jazz finally earned its own place at the table in 2006. Since that time, rising stars like drummer Kesivan Naidoo, pianist Bokani Dyer, and bassist Shane Cooper have all been rightly recognized with this honor.

Pianist Kyle Shepherd joined the ranks in 2014, but receiving that award was only one of the high points of the year for him. The release of his latest trio document, the arrival of his first solo album, a short tour through Japan to support said solo album, strong sideman contributions on drummer Claude Cozens' Jubilee Jam (Self Produced, 2014), and a scheduled stop at Zankel Hall at Carnegie Hall with Naidoo's band—Kesivan and The Lights—have all contributed to making 2014 a banner year for Kyle Shepherd. 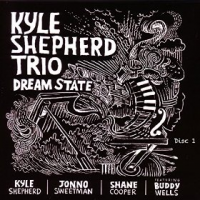 Dream State celebrates the five year anniversary of Shepherd's Trio with Cooper and drummer Jonno Sweetman. The album, overflowing with creative ideas, is bursting at the seams with music; twenty-one tracks are spread across two CDs, so there's a lot to take in here. There are certain recurring ideals and structural devices at play, but the musicians never get stuck in a rut. Shepherd may often eschew needlessly long harmonic schemes in favor of shorter progressions or vamps, but he's able to work magic within those walls, juxtaposing variations on a brief idea against unique foundational riffs. Odd meters also abound, with songs—or parts of songs—in thirteen (The "Re-Invention" portion of "Re-Invention/Johannesburg"), seven ("City Monk, Desert Monk, Zikr"), and five ("Xahuri").

The chemistry between these men is evident throughout. They walk many different paths as one, exploring the softer side of things, delivering sheer expressions of joy ("Family Love"), working in wide open spaces and atmospheres ("The Seeker"), moving loosely about ("The Sun At Dusk"), and settling into a state of reverie via hymn-like music ("Transcendence"). Saxophonist Buddy Wells joins in on a handful of tracks, bringing positive energy with him. His saxophone work projects sunshine during "Xamissa" and he has a blast letting loose during "Siqhagamshelane Sonke," a piece that finds everybody walking a goema-meets-calypso line.

There's a tremendous amount of music to digest on this one, but that's a good thing. Dream State documents Shepherd's trio from nearly every angle possible, giving a complete view of this exciting working outfit. 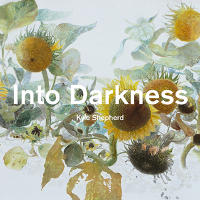 Into Darkness—Shepherd's first solo piano outing—was recorded in 2012 in Miyawaka, a small farming town in Japan. The session for the album began in the evening, and as the night took hold, the sounds of nature communed with Shepherd's piano. Rather than edit out these gentle insect noises and subtle callings of the dark, Shepherd left them in; they're barely noticeable, but they enhance the experience of hearing this music, putting the listener in the very same space as Shepherd.

This album contains expressions of peace and slumber ("Kalk Bay"), ebullient thoughts, reflective journeys ("There's A Sadness In Us All"), and even an avant-garde miniature ("Silent Tongues Rise Up"). There's plenty of breathing room in most of this music, but there's also that same sense of movement and flow that's found in Shepherd's trio work. In other words, Shepherd lets his mind wander a bit, but he never lets his thoughts run away from him. On one track, a sense of pride and reverence is patiently funneled through Shepherd's fingers during a relaxed salute to his homeland ("Song For South Africa"); and on the next number, he goes somewhere else, as a non-bombastic form of Stravinsky-esque prancing takes hold ("Multi-tonal Excursions"). Shepherd even puts his saxophone to good use, overdubbing parts onto the sunny and hopeful "Salaami (Peace On Earth)."

While Dream State is all about musical relationships, Into Darkness is more of a window into Shepherd's emotional state of being at any given moment. 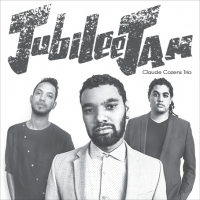 Both discs under Shepherd's name are closely related in style and syntax, but Cozens' Jubilee Jam is something different; that's clear right out of the gate, with gospel-ish synthesizer sounds, rumbling drums, spacey explorations, and slick grooves appearing on the album-opening "Fynbos Spirits." Cozens' music can be fusion-y, funky, organic, sedate, or highly excitable, but none of it is foreign to Shepherd. Cozens, like Shepherd, often works with shorter forms that make for great canvases to paint across. He also delivers upbeat themes and goema-based constructs, but they're often embedded within a technicolor electro-acoustic framework that's been built with jazz, fusion, R&B, and hip-hop materials.

Cozens, Shepherd, and bassist Benjamin Jephta tend to sound best when they get down and dirty. The busy approach to music-making doesn't work for every band, but it works beautifully for this group, with Jephta's fluid and bubbly electric bass, Cozens' charged drumming, and Shepherd's wide-ranging and colorful ideas coming together to create something exciting and different ("Plaktop"). In other places, Cozens prefers to simply create a vibe ("Electric Street") or let the musical tides gently lap against the ear ("Baden Powell"), but this band really catches fire when the kid gloves come off ("Brother Boesack"). Cozens' compositional personality is on full display across fourteen tracks, ranging from the semi-mellow to the molten, but it's the interplay with his trio mates that leaves the greatest impression.

Kyle Shepherd and his peers have made it clear that there's quite a jazz scene brewing in South Africa. Maybe it's time for the rest of the world to take better note of it.