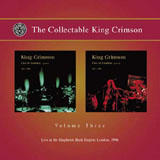 Recorded half-way through a forty-date tour across Europe and North America, Live at the Shepherd's Bush Empire, London, 1996 isn't the first live document of progressive rock group King Crimson's mid-1990s Double Trio. But this third volume in the double-disc Collectable King Crimson series—following the 1972-74 configuration's Volume One (DGMLive, 2007) and 1981-84 Crim's Volume Two (DGMLive, 2007)—which makes some of the best of its previously mail order-only live shows available on a larger, commercial scale, represents a number of firsts. It also offers a performance that may make believers of those who feel that 1994-97 Crimson was something of an unwieldy and overwhelming beast.

First, it's the only widely available record of a complete performance by the Double Trio other than B'BOOM: Official Bootleg (DGMLive, 1995), culled from the group's earliest 1994 shows in Argentina. With considerable touring under its belt and a broad cross-section of material from a then 27 year discography, as always Crimson live far surpasses its studio releases. More than just a matter of greater energy and, in this case, upping the tempos of some of the material to near-light speed, the Double Trio represented a return to fearless improvisation inside and out of the context of preconceived songs, with "Improv I" a surprisingly beautiful percussion-less feature for guitarists Robert Fripp and Adrian Belew, touch guitarist Trey Gunn and bassist/Stick player Tony Levin.

Second, this pristine soundboard mix demonstrates, more clearly than any other Double Trio release, just what having this broad a palette and six concurrent players could contribute to the Crimson canon. Powerful readings of the chaos-meets-minimal-groove of "Neurotica," the metallic prescience of a near-reckless "Red" and two remarkably composed percussion duets from Bill Bruford and Pat Mastelotto—the set-opening "Conundrum" and the encore set-up to Crimson's popular "Elephant Talk," Swiss percussionist Pierre Favre's "Prism"—demonstrate not only the group's potential for dense sonic mayhem, but richer harmony and complex polyrhythm as well.

Third, with opening act The California Guitar Trio unavailable, Fripp expands his usually brief "Introductory Soundscape" into a full 25-minute mini-set. By this point Fripp's integration of technological advancements (a driving force behind every reconvening of Crimson over the past forty years) into his "guitar as orchestra" Frippertronics of the 1970s, creating the more sonically expansive Soundscapes, had already been documented on albums including 1999 Soundscapes: Live in Argentina (DGMLive, 1994) and would evolve further for Love Cannot Bear: Soundscapes Live in the USA (DGMLive, 2005) and At the End of Time: Churchscapes—Live in England & Estonia, 2006 (DGMLive, 2007). But Crimson show attendees rarely had the opportunity to experience the full impact of Fripp's innovative and seemingly impossible feat of layered, real-time sonic explorations. Largely gentle, but pushing the boundaries into more outré territory at times, it's one of Fripp's best recorded 1990s Soundscapes.

Lastly, despite singing "We don't do '21st Century Schiziod Man'" on "The King Crimson Barber Shop," a humorous bonus track from Three of a Perfect Pair (DGMLive, 1984), Crimson surprises the London audience with its first performance of the iconic song from In the Court of the Crimson King (DGMLive, 1969) in 22 years. As ever, even when facing material dating back to its very beginning, King Crimson never faces anywhere but forward, and this is the reason for Crimson's relative rarity among groups that emerged from 1970s progressive rock. Whether it's symphonic prog, nuevo metal, outrageously aggressive improvisation or rhythm-happy grooves, each successive incarnation of King Crimson has always had something new to say, speaking with its own voice.

The occasional bleed-through of some Beavis and Butthead-like audience members throughout the set's two hour-plus duration only adds to the "you are there" vibe of Live at the Shepherd's Bush Empire, London, 1996. The sheer logistics of rehearsing and touring such a large group would finally cause the Crimson Double Trio to fall apart—"fractalizing," as Fripp has often described it, into a number of smaller experimental units called ProjeKcts that ultimately led to the Double Duo responsible for The ContruKction of Light (DGMLive, 2000) and The Power to Believe (DGMLive, 2003). But despite the age of the performance and the retro potential of even more dated material, some now nearing forty years in age, Live at the Shepherd's Bush Empire, London, 1996 proves the Crimson Double Trio—with but one studio release, THRAK (DGMLive, 1995), a sometimes overlooked incarnation)—to be fresh, vital and, most importantly, completely relevant and utterly timeless twelve years later.