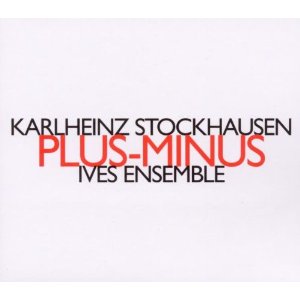 There can be little doubt that the composer Karl-Heinz Stockhausen has had—and continues to have—an ever widening influence on contemporary music. Beginning in the 20th century and continuing on into the 21st century, Stockhausen's masterly use of tonal colour and advanced use of timbral values has touched modern composition involving musicians employing various idioms in music, from improvised music, through composed music and, of course, the music that continued to fascinate and influence Stockhausen himself: jazz. This album, Plus-Minus, which includes the first ever recording of that classic piece of the same name from its graphic score and also "Kreuzspiel" (Crossplay), from among the composer's early work, are two of the most influential and among the finest, most challenging works by the great German composer.

The third composition, "Refrain," is one of Stockhausen's seminal works. It marks the time when the composer is said to have found his voice and thereby charted a course to inadvertently becoming one of the era's most important composers. The music centers around three players/instruments—piano, vibes/glockenspiel and celest—and each player widens the sound palette he has created with his instrument by doubling on another instrument. These are, respectively, woodblocks, cowbells and crotales. By also using their voices with sliding and controlled attacks, the players add more tonal color to the music they play. There are subtle variations of timbre and as these unfold, Stockhausen's complete mastery of the total landscape of sound is revealed.

"Kreuzspiel," on the other hand, while quickly showing that Stockhausen is clearly trying to break free of Schoenberg's theory of serialism, still incorporates elements of the same as it does also acknowledge a debt to the music of Olivier Messiaen as well as Karel Goevaerts. Still, the piece, in three sections or stages, linked together by brief intervallic passages, marks Stockhausen's development of "punctual" or "pointiest" music extracted as a measure of the rejection of twelve-tone serialism in favour of "athematic serial" music. The music is exquisite, based on three sets of divergent, but converging waves of notes that sway inward, then outward and flow with and against the tide of the waves of sound governing the music.

The most important piece of the album is clearly the challenging work, "Plus-Minus." This is a gigantic, elastic piece written in a set of seven grids featuring seven different sets of sound material. These range from precisely pitched sound with hard timbres to timbrally indeterminate sounds rich in noise or sound of the softer variety. This is a truly remarkable work that acknowledges the influence of contemporary jazz in the elasticity of its composition as well as its instructions to the performers. The great complexity and ultimate excitement of the score is the elasticity with which each of the seven pages of the score is to be interpreted. The first is the direction and degree of change of the register with which each event or section affects the forthcoming section by transposition, and the second is the plus-minus notation attached to each event. Plus values make for an extension of the event or section; minus values shrink the time of the event.

"Plus-Minus" also makes great forays into the realm of spatial silence. When "minus" notations reach zero and begin to form a negative value for a forthcoming event there is an area of silence that musicians negotiate. This, of course, adds to the dramaturgy of the score and this consequence means that the music gains in excitement and retains an enduring nature. The other aspect that makes this piece quite timeless is the manner in which it has been interpreted by Christopher Fox and pianist/conductor of the Ives Ensemble, John Snijders. By following not merely the letter, or in this case, the graphic numerals of the score, but also rightfully interpreting the elasticity of the instructions provided by the great Stockhausen, they have breathed life into a piece of music that the composer may only have dreamed would be possible. In preserving not only the score, but also the sound of that incredible music for posterity the ensemble, Fox, Snijders and, of course, hat(now)ART must be roundly congratulated for giving another masterpiece by Stockhausen preservation for future generations to enjoy.