By JOEL ROBERTS
December 12, 2005
Sign in to view read count 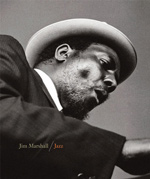 Though he's known mostly for his iconic photographs of '60s rock royalty like Janis Joplin, Jimi Hendrix, and the Beatles, Jim Marshall was a jazz fan first. In the early '60s, before heading to San Francisco to chronicle the Flower Power generation, Marshall was a frequent habitué of the New York clubs where a dazzling assortment of jazz legends and legends in the making then performed on a nightly basis.

The first collection of Marshall's jazz photographs, titled simply Jazz, brings together 115 of his gorgeous black and white pictures, drawn mostly from his New York sojourn as well as his later years in California, where he continued to take occasional pictures of jazz artists, notably at the early Monterey Jazz Festival. There are dozens of memorable performance shots here of Duke Ellington, Bill Evans, and Ray Charles, among others, captured live on stage in the moment of artistic creation.

But what sets Marshall apart is his eye for the artists in intimate, unguarded moments off the bandstand—Thelonious Monk with his family in their West Side apartment, John Coltrane deep in thought in the recording studio, Miles Davis sharing a private laugh with actor Steve McQueen.

With his unfettered access to the musicians and their apparent ease in his presence, Jim Marshall has captured some rare and beautiful images of the giants of jazz.