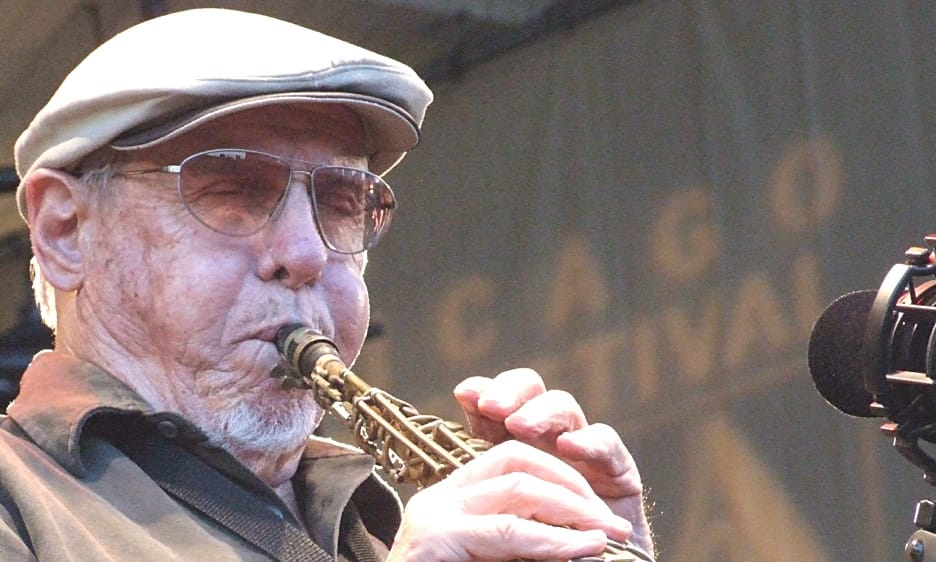 By DAVID EINHORN
February 21, 2020
Sign in to view read count

You could feel that everyone was holding their breath, so it was natural for them to applaud when the music changed.
—Ira Sullivan

A critic in Chicago in September 2016 raved about multi-instrumentalist Ira Sullivan's performance at the Jazz Showcase but said that Ira "erred" in lecturing the audience not to applaud after solos. It sounded like the critic had never heard Ira perform live before, because saying he "erred" suggested that at a given moment Ira "misspoke" and impulsively said something he should not have said.

If that's the case, then Ira, who will turn 89 this year and is still going strong, has been erring since he burst onto the jazz scene some six decades ago with Art Blakey, among many other jazz luminaries. A more astute reviewer might have taken Ira to task by simply saying: "I disagree with asking people not to clap in between solos, and here's why."

For my part, having played and recorded with Ira over the years, I don't quite see the wisdom of him going on about this in front of audiences... and yet I can't help but find a certain charm in his one-man crusade, one of several he's championed over the years. It's as if Ira were the Don Quixote of jazz, flailing away— often from distant lands like his adopted hometown of Miami far away from the world's jazz meccas—at jazz windmills that have been grinding out the music's traditions since the art form has existed.

Ira's position is that clapping after solos constitutes a rote response that dates to days gone by when jazz musicians tried to outplay each other, and that it often does not correspond to what's transpiring on the bandstand at a given moment. That's especially true considering Ira's fluid approach to improvisation in which solos are not always clearly defined, which in turn reflects his aversion altogether to the concept of jazz musicians mindlessly soloing one after another—a rigidity that can make the music utterly predictable and that Ira views as anathema to the concept of improvisation. With Ira, "solo" sections of tunes overlap, different instruments play duets, different instruments drop out, and one song often morphs into another, all of it on the fly.

Ira is quick to note, however, that clapping during a song can have its place. He likes to tell the story of a concert at a Unitarian Church in Miami with the great guitarist Joe Diorio during which they played Luiz Bonfa's haunting bossa nova, "The Gentle Rain." As was their wont, Ira and Joe got into a long back and forth that created extraordinary musical tension which eventually culminated in a musical "release" of sorts that Ira metaphorically defined as the sun finally coming out. Since Ira and Joe had by then been performing for some years at the church, the audience, accustomed to Ira's jazz etiquette, burst into applause just as the musical tension resolved.

"You see, that makes sense," Ira exclaimed, "because they're responding to what's happening with the music. You could feel that everyone was holding their breath, so it was natural for them to applaud when the music changed."

That pure approach to jazz improvisation dovetails with Ira's rather amorphous approach to defined performance times. With Ira, a set can go for an hour... or three. Dizzy Gillespie once came to one of Ira's gigs to hear him and to hang out but eventually left after two hours because Ira never stopped playing. Once when I was playing with Ira during one of these marathons he cheerfully told the audience at some point: "We'll just keep playing and you guys can cut out whenever you'd like."

Sometimes all of this works with audiences, sometimes it doesn't, particularly with audiences that are less familiar with Ira's music. Typical of him, however, and unlike some artists who shame their audiences into silence by reprimanding people who so much as cough, Ira almost always makes his point gently, often with humor, and not always with sufficient clarity that people really understand what he's saying anyway. So for the most part—barring apparently the occasional music critic—audiences hardly seem bothered by it.

To me, Ira's approach to opening up the music indeed is a logical next step for jazz, because it blends improvisation with crack musicianship and open horizons. I once heard Ira at the Village Vanguard with Red Rodney playing "Giant Steps," John Coltrane's tour de force which over the years has unfortunately been pummeled into a jazz exercise. But their version breathed such new life into the song that I could visualize Trane smiling down from heaven. They started it as a fast but light waltz that highlighted the lovely melody, then eventually morphed into the parallel tempo in 4/4 time—which, in the event some foolish jazz snob might have thought Ira was substituting beauty for technical facility, put the tempo so fast that only true jazz masters could possibly have played it. (Ira and Red and their bandmates had no problem.) Knowing Ira, it should be noted, this was likely not a strict arrangement, but rather one of several ways the band had rehearsed the song (if they had rehearsed it at all). That's a lot different from most jazz groups, and that is what has always made listening to Ira, and playing with him, such an exhilarating experience.

The limit to Ira's pedagogy is that he is asking the audience to listen to the music with the same level of intensity with which he is playing it—that is, to so thoroughly focus on what they are hearing that they can react to it in real time with pinpoint accuracy. But that's a tall order which doesn't take into account that not all of Ira's fans—including some of the most faithful—necessarily have the musical expertise, or even in some cases the desire, to listen so viscerally. Love of music, after all, is a sacred and personal relationship unique to every individual. Some people indeed listen with closed eyes and are profoundly moved, even though they may not necessarily understand the mechanics behind what is going on; some still nostalgically adore cutting sessions and the battle of the bands; and yet others simply love the jazz "scene" and are attracted to Ira's virtuosity, charisma, and, yes, even his quirkiness, appreciating the music on a wholly different, and perhaps more superficial, level. Getting this array of constituents onto the same page as if they were absorbed in a Schubert sonata is no easy task. And of course let's not forget that not everyone who goes to the concert hall to hear Schubert is there for the same reasons either.

Ira surely understands all of this, but he'd no sooner admit defeat than stop playing. His music is so extraordinary that by definition his performances absorb all of the energy in a room, so lecturing the audience hardly seems necessary. Yet, Ira relishes his one-man crusade and it is part of who he is. As long as he plays, he'll keep trying to teach his audiences, whether they like it or not, how to get the most out of his musical journey.