Hall & Oates at the Nikon at Jones Beach Theater 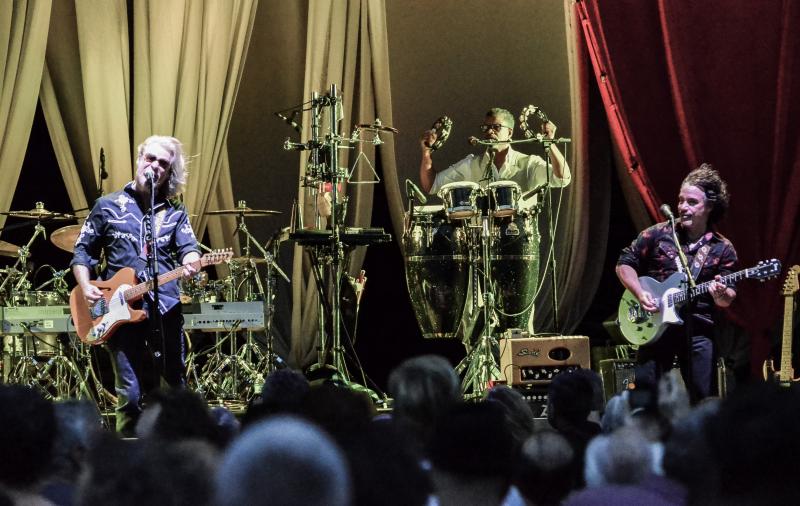 In the 1980s, Daryl Hall & John Oates sold albums and CDs at a rate similar to that of Madonna, Bruce Springsteen, U2, Prince and Michael Jackson. Their songs could be found on and still can be found prominently on jukeboxes across the country. The duo's seemingly endless string "classic" blue-eyed soul/funk pop included six number 1 Billboard hits ("I Can't Go For That (No Can Do)," "Kiss On My List," "Maneater," "Out of Touch," "Private Eyes" and "Rich Girl"). Hall & Oates have also charted many other songs in the Top 40 (including "Sara Smile" and "She's Gone") and released numerous RIAA certified gold and platinum albums.

Hall & Oates is one of the longest tenured acts of the rock era. Their friendship dates back to 1967. Shortly after meeting the duo began collaborating and making music. They plied their trade for a number of years before their first album, Whole Oates, (Atlantic Records) was released in 1972.

Of the two multi-instrumentalists, Daryl Hall most-often handles the lead vocals. John Oates primarily plays guitar and delivers spot-on backing vocals, while occasionally singing lead. In 1984, the RIAA declared that Daryl Hall and John Oates were the most successful duo in rock history. The duo, who wrote most of their hit songs (either separately or in a collaborative effort), were inducted into the Songwriters Hall of Fame in 2003. In 2012, Billboard magazine voted Hall & Oates as the number 15 greatest artist of all time on their Top 100 greatest artists list. The magazine also voted them as the number 1 duo. VH1 ranked the duo as number 99 in its Top 100 artists list. In April 2014, the Rock 'n' Roll Hall of Fame came calling and honored Hall & Oates with induction into its hallowed halls.

On a warm, slightly but not overly muggy July evening, with just the slightest threat of rain in the forecast, before a very vocal and appreciative multi-generational crowd of fans at Wantagh, NY's Nikon at Jones Beach Theater, Hall & Oates performed a stellar set touching on every facet of their forty-plus year career. Various sections inside the orchestra had puddled-up from the rainstorms that had hit the area earlier in the day. The evening's performance was delayed for about 15 minutes as the amphitheater's maintenance crew mopped the puddles that were caused by the downpours.

Not to be deterred by the earlier rain, as well as the threat of additional storms, Hall & Oates delighted their fans with a fifteen song set of favorites that seamlessly blended Philly soul harmonies with pop, rock, funk, blues, a hint of a gospel and some very danceable beats. The performance began with a bouncy version of "Maneater." Hall, dressed casually in a black shirt featuring white designs, with his hair blowing in the breeze, introduced "Out of Touch" as "a Big Bam Boom (RCA Records, 1984) song for you all." With Hall toying with the song's phrasing and delivery, this version of the song was even more powerful than the original.

As is the his usual modus operandi, Hall spent the early portion of the show on guitar and bantered with the crowd providing insights into the songs that were about to be performed (he stated that "Did It In A Minute was "a song we don't play too often; it's from the Private Eyes (RCA Records, 1981) album. We just started doing it again..."). Oates, dressed in a black shirt with a red design was a bit more stoic. The usually reserved guitarist did, however, have his moment of mischief. Following "Say It Isn't So," Oates donned a baseball cap. Upon seeing this, Hall commented, "Hey, you put a hat on. Can I put a hat on, too?" Oates deadpanned, "You're Daryl Hall, you can do whatever the fuck you want." Not to be outdone, Hall replied, "Well that opens up a lot of possibilities."

With that, Hall switched gears and introduced "You've lost that Loving Feeling" as "one of the greatest rock 'n' roll songs ever written." The powerful version of the Righteous Brothers classic featured stellar performances by the six-piece backing band (featuring Shane Theriot on guitar, multi-instrumentalist Eliot Lewis, bassist Klyde Jones, Brian Dunne on drums, percussionist Porter Carroll Jr. and long-time saxophonist Charlie "Mr. Casual" DeChant) as well as the smooth, soulful vocals harmonies for which Hall and Oates are so well known.

Throughout the evening, Oates' guitar playing was crisp and tasty. His background vocals were clear and sweet. He sang lead only twice, but his vocals on those songs, "Back Together Again" from Bigger Than The Both of Us (RCA Records, 1976) and the funky "Las Vegas Turnaround" from Abandoned Luncheonette (Atlantic Records, 1973) were letter perfect.

The main set ended with a flourish. "She's Gone" (about which Hall noted, "No matter how many times we play this, it feels real."), "Sara Smile," and "Do What You Want, Be What You Are" (featuring Hall on keyboards) each had the audience singing and dancing along. On the main set finale, an extended version with call and response audience participation, of "I Can't Go For That (No Can Do)" all the players were on fire. Oates delivered an amazing guitar solo, DeChant's sax hit all the right notes and Carroll's backing vocals were pure and in the pocket.

When the song ended, the band left the stage for only a moment. They returned to play two encore sets. The first was comprised of the sing-along favorites "Rich Girl" and "You Make My Dreams Come True" (with an extended opening), and for the second encore set, the band delivered energetic and fun versions of "Kiss on My List" and "Private Eyes" (with its audience participation hand clapping).

The evening's performance was excellent and hits-filled. If there were to be any objection, it would be that they didn't play more/longer. Unfortunately, "One on One," "Everytime You Go Away," "Bebop/Drop" "Adult Education" and "Family Man" weren't played. The delay of the start of the concert (as the pools of water were removed from the seating areas) and the possibility of another rainstorm appeared to curtail the length of the performance. As a result, following the approximately hour-and-a-half concert, the audience was back in the parking lot and purchasing bootleg t-shirts prior to heading home at a fairly early hour.