Gumbo Nation: The World That Made New Orleans - From Spanish Silver To Congo Square 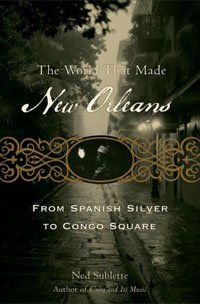 It is an African-American Atlantis, New Orleans: a crescent-shaped city six-feet under water at the mouth of the mighty Mississippi river. For centuries Africans, West Indians, Cubans, Haitians, Creoles, native tribes and European-Americans—and others—have forged a unique and enduring cultural gumbo there. New Orleans is the birthplace of jazz, the incubator of the blues, the nurturer of gospel music, the crucible of a dynamic brand of English, and a treasure chest of gastronomical delights.

But those cultural miracles were breech-birthed by slavery, genocide, war, Jim Crow segregation, urban neglect, and crime—right on up to the national shame, horror and governmental treason that was Katrina. Therefore, writing about a place like this requires a writer who can tell the difference between myth and history—not so much as to separate them, but rather to weave them into a nuanced narrative that informs as it investigates, and educates as it entertains.

Fortunately, the ebullient musician and record company owner Ned Sublette is such a writer. He is a man of quantum complexities: a white southwesterner, based in New York, who owns Qbadisc, a CD company specializing in Cuban music. He's also a first-rate cultural historian and musicologist, as already evidenced by his book, Cuba And Its Music: From The First Drums To The Mambo (Chicago Review Press, 2004), which is arguably the most readable and comprehensive work on that island's musical history.

In many ways, The World That Made New Orleans is a worthy sequel, not only in sequence, but also in substance. As Sublette lays out in intricate and accessible fashion, New Orleans and Havana were sister cities: exchanging slaves, freemen, foods and music like the Cuban habanera (the rhythmic propulsion that pianist and composer Jelly Roll Morton termed "the Spanish Tinge" necessary for jazz). Even more important was the fact that the Haitian revolution impacted on both cities. Haitian masters and slaves fled to Cuba, and then to New Orleans, which ultimately resulted in the Louisiana Purchase. What makes Sublette's book such a good read is the way he presents the minutest details of the city's unique creolization of peoples, without diluting the intrigue that went into making that melanin-rich mixture. "New Orleans," he writes, "is an alternative American history all in itself."

The author draws on a number of scholarly works, including Gwendolyn Mildo Hall's Africans in Colonial Louisiana (LSU Press, 1995), and outlines the richly complex mix of West African peoples thrust into ever-changing, colonial musical-chair-of-ownership from the Spanish and the French to the Americans. It was the lax attitude toward African-Caribbean culture by the former Catholic Latin powers (no doubt because of their familiarity with people of color, thanks to 800 years of Iberian Moorish occupation) that made New Orleans possible; as evidenced by the near destruction of the Creole population, that was forced to merge with darker African-Americans by the Anglos.

Make no mistake: this book doesn't shy away from the brutality of the lynchings, slave rebellions, kidnappings and corruption that marked the city's history as much as the elegant French Quarter architecture. Even the ironic, faux-elegance of the Octoroon Balls—where beautiful café-au-lait girls were pimped-out to white men in mocking sartorial splendor—is not overlooked by the author. But Sublette also shows the miraculous ability of the New Orleans people to reinvent themselves, endure and create traditions, like the festive Mardi Gras, surpassed only by Brazil's equally splendid carnival, and the colorful and misunderstood Mardi Gras Indians: African-Americans who "mask" in their regal, Indian garb, and dance and chant in mysterious African-Indigenous choreography.

It is with those Indians, those guardians of the Crescent City's cultural flame, which was, for a time, doused by the hurricane, that Sublette marks the rising tide of New Orleans' unkillable, syncopated spirit. "They refused to cooperate in their own erasure," he writes. "They were still men, and these were still their streets. They won't bow down. They rocked the city with their Congo Nation."