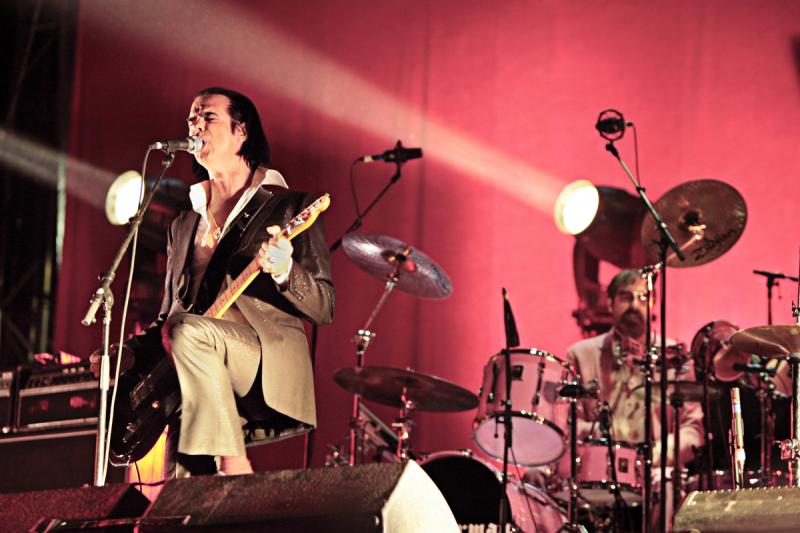 The well-known adage that all roads lead to Rome may not be entirely true when the Exit festival is happening, as all roads seem to lead there. For four days—taking place at the Petrovaradin fortress near Novi Sad—Serbia welcomes floods of people from all over the world who are attracted by its exotic location, good food and excellent music. Considering its history and things that have happened there, there is nothing like it and nothing can be compared to it. It really is an enormous city-within-a-city, its guests constantly on the move, looking for various hidden music treasures at various corners of the fortress. Nick Cave's Grinderman concert was one of the highlights of the festival's twelfth edition, one that absolutely floored the audience.

As a band, Grinderman has been spewing its sweaty mix of noisy punk blues for the last five years. One thing is certain: the band is brutally direct, evil and scary. No wonder Pitchfork has called it "Cave's schizophrenic and sloppy midlife crisis project." It takes everything that is despicable, ugly, dangerous, vile and tasteless in rock and runs with it, magnified even further in a live setting, where its potent cocktail of raw improvised sound is explosive.

Grinderman represents Cave's attempt to try something different in order to shake off stale routine and do things that his flagship group, The Bad Seeds (despite three musicians being common to both) could not. Cave's creative spark has clearly been relit after the foul and uninspired Nocturama (Mute, 2003), with better output such as the twin album Abattoir Blues/The Lyre of Orpheus (Mute, 2004) and, eventually, this Grinderman side-project.

Throughout its 60-minute set, Grinderman struck a perfect balance between theatricality and its raunchy, noisy, lo-fi and sometimes bizarre blues-rock assault. The show was cathartic fun from the very beginning. Cave was always in motion—jumping, bouncing, crowd-diving or playing a guitar (an instrument he had never played before) or keyboards. Certain bands or people truly embody the spirit of the music that they play, and certainly Cave didn't have any problems living up to his ferocious reputation onstage. It often seemed that he was channeling the weird and manic energy of a demonically possessed man and, as such, was a sight to behold, playing and singing with furious intensity. This was a prime example of a charismatic rock front man, backed by seasoned musicians with the fire and drive to prove themselves.

The band went from song to song with a sense of reckless abandon, as Cave and guitarist/violinist Warren Ellis traded off beefy guitar riffs and noise. It seemed that Ellis served as both a musical and sparring partner, the two sometimes screaming, and often crashing and bouncing off each other. Drummer Jim Sclavunos was an animal behind the kit, pounding out both brutal and delicate rhythmsm while bassist Martin Casey—whose birthday was that night—served as the anchor around which all of the music and improvisations revolved.

The set list featured exclusively songs by Grinderman, including "Mickey Mouse and the Goodbye Man," "Worm Tamer," "Get It On," "Heathen Child," "Evil," "When My Baby Comes, " "Honey Bee (Let's Fly to Mars)," "Kitchenette," "No Pussy Blues," "Bellringer Blues," "Grinderman," and, as an encore, "Love Bomb."

Few in attendance could have predicted such energy. The band seemed to be indefatigable, indulging in a demanding physical performance that defied the onset of the supposed old age. It took a bunch of men in their fifties to show an entire generation of young bands how it should be done. Grinderman was a perfect example of the way 21st century rock music should sound: raw, unpolished, unpredictable, unbalanced, dangerous and mad.