Grace Potter at the Paramount 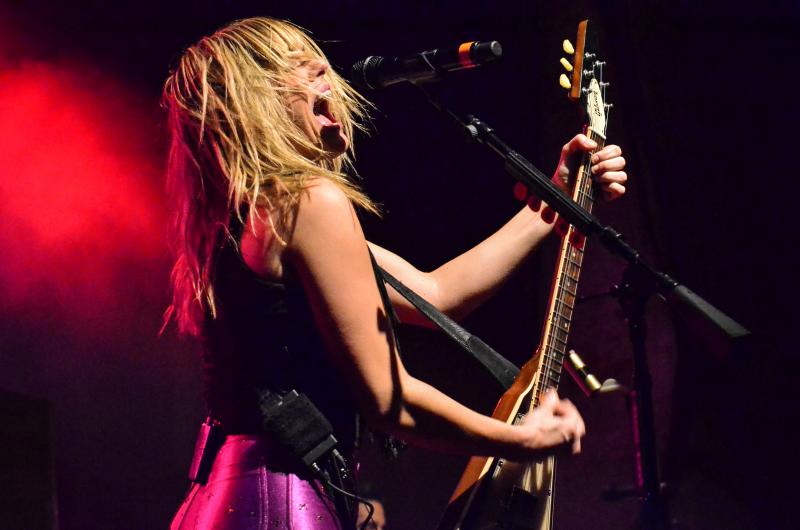 Grace Potter's performance on Thursday, December 10th at the Paramount in the tony Long Island town of Huntington, NY was a high energy performance much akin to a tent show revival. The audience members all came to worship and by the end of the evening they were all sweaty, exhausted and yet completely galvanized. As the fired-up crowd poured from the mid-sized theater the buzz was an amazing mix of shock and awe, not the shock and awe of an army offensive (though it could be compared to that) but, rather, the mystical shock and awe of a spiritual awakening. In keeping with the religious experience theme, Potter's show was a revelation. Some would call her a "miracle" because she can sing the blues, rock out with the best of them, strut around the stage like a female cross between Mick Jagger and Steven Tyler (while wearing spike heels that neither of these guys would even think of attempting), sing heartfelt slower songs as well as and offer up gospel-tinged songs. She is truly one of a kind. Potter's show combined high energy rock 'n' roll with gospel review theatrics and musicianship. Opening the evening with an incendiary version of "Hot To The Touch," the opening track from Midnight (Hollywood Records, 2015), the spandex and high-heeled clad Potter burned brightly throughout the evening. Effortlessly mixing songs from her solo debut with offerings from her output with the Nocturnals, the multi-instrumentalist had the crowd eating out of the palm of her hands.

The numerous selections from her Nocturnals catalogue included "Loneliest Soul," "Turntable," "Runaway," the encore "Stars" and main set ender, the title track from 2012's The Lion, The Beast, The Beat (Hollywood Records). She checked in with "Ragged Company," the rockin' "Nothing But The Water I" from the Nocturnals' debut CD which was also entitled Nothing But The Water (Hollywood Records/Ragged Company, 2006). The electrifying "Ah Mary" from This Is Somewhere followed the opening number and built (if that was even possible) upon the energy of that song. This Is Somewhere was also represented by the mid-tempo and gentle love song "Stop The Bus." Her third Hollywood Records release, the self- titled Grace Potter & The Nocturnals (2010) was ably represented during the encores by "Medicine" and "Paris (Ooh La La)."

In addition to "Hot To The Touch," the multi-generational crowd was also treated to a setlist that included most of the Midnight CD. The sultry "Biggest Fan," "The Miner," "Nobody's Born With A Broken Heart," " Look What We've Become," "Your Girl," "Empty Heart" and "Insitigators" (in that order) all made their way into the evening's festivities.

Potter's songs are all rather emotional. And on this night it was never more clear than on her performance of "Your Girl" a tale of jilted frustration and jealousy. The girl can also rock as evidenced by the fire and brimstone breathing, balls-to-the-wall, assault of "Instigators" and the high voltage "The Lion, The Beast, The Beat" and the furious closing of "Paris (Ooh La La)" which segued into " I Love Rock 'n' Roll" (originally written and recorded by the Arrows but mostly known today as a Joan Jett song) and back into a "Paris (Ooh La La)" reprise.

As the last notes of "Paris (Ooh La La)" faded, the drenched and sweaty crowd trudged down the stairs and headed out into the unusually warm December evening totally spent, satisfied and nourished by the moving performance that that they will undoubtedly tell friends that they were there that night at the end of 2015 in Huntington when "Grace Potter reached deep into my soul and changed my life."