Gogol Bordello At The Space At Westbury 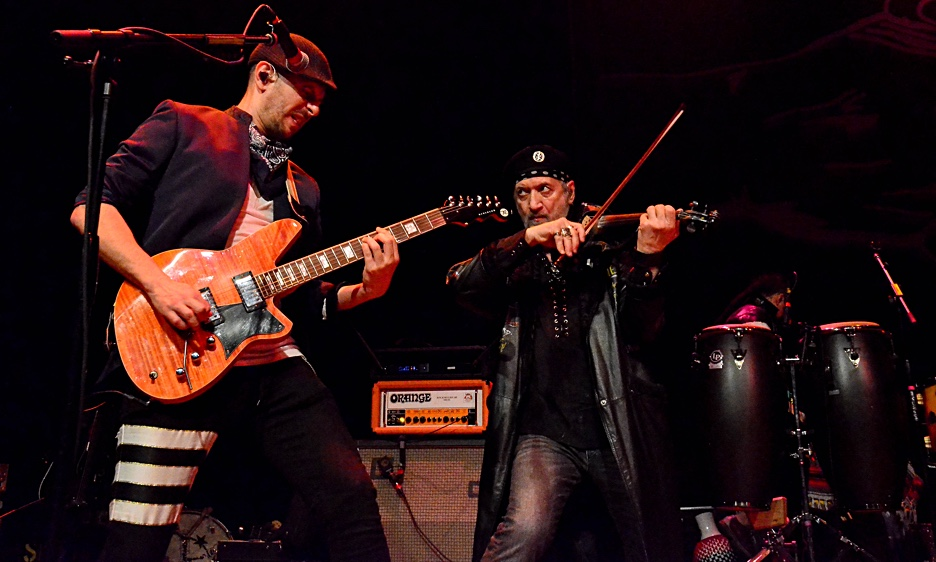 Formed in 1999 on the Lower East Side of Manhattan, the group is known for theatrical stage shows and almost unending tours. The music is loud and joyous. The band members act as though they learned their trade at Theatre of the Absurd. Gogol Bordello's performances get their devoted audiences bopping, dancing and singing along.

As one might expect, some call Gogol Bordello a collective of crazy people. The band members can and will do just about anything to enhance the group's performance. A Gogol Bordello show is as much a spectacle as it is about music. They are all showpeople of the highest order.

At any given show at virtually anytime, frontman Hütz is likely to pop open a bottle of wine, throw bouquets of flowers to audience members via a huge slingshot, twist himself around the legs or torso of another band member while playing the accordion or take it upon himself to lead and teach a course in samba dancing. In a previous life, Hütz may very well have been the master of ceremonies at a traveling circus. It is as if he is now reliving that life under a modern big top as ringmaster for a circus of musical gypsies.

The band gave its all on a cool Wednesday night at Westbury, New York's The Space. Opening with an abbreviated number of performers on a fantastic version of "We Did It All," the full band came onstage for the second tune, "Break Into Your Higher Self." At that point, the entire group was in character, and for the rest of the evening delivered a high energy musical and performance art show.

The evening's performance was highlighted by powerful versions of "Immigraniada (We Comin' Rougher)" from the CD Trans-Continental Hustle (American Recordings, 2010), featuring audience members chanting along with Hütz. Other highlights included "I Would Never Wanna Be Young Again" from Gypsy Punks: Underdog World Strike (Side One Dummy Records, 2005), "60 Revolutions," "Start Wearing Purple," "Through The Roof 'n' Underground" and "Saboteur Blues" from Seekers and Finders (Cooking Vinyl, 2017) as well as "My Companjera" and "Alcohol."

For those who had never seen the band, the show was definitely a revelation. For the faithful, it was business as usual. Either way, crowd members were mesmerized and taken by the energy of the foot-stomping set. They sweated, danced and lost themselves in the swirling rhythms as Hütz, sang, danced, strummed his guitar, drank from his wine bottle, cajoled and interacted with them. As the evening progressed, he made it his business to ensure that each and every band member was given the opportunity to showcase their chops.

At the end of the performance, the band members came to the center of the stage, joined hands and bowed, much like the cast of a Broadway production. As the crowd ambled out into the lobby, many stopped by the band's merchandise table—where it became apparent that the Gogol Bordello machine was comprised of marketing geniuses. Fans were seen purchasing CDs (both recently released and those released early in the band's career), vinyl versions of these albums, posters, caps and any number of different T-shirts.

A Gogol Bordello performance is a happening. It is a must-see.