The Hollywood Blues Destroyers: Skip Heller: For EP Fans Only 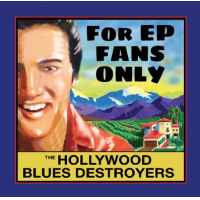 Fred "Skip" Heller is, in my estimate, a most undervalued cultural mind. Musically restless by nature, Heller is a two-million candle light, illuminating whatever musical style is intriguing him at the moment. This restlessness has led to Heller's exploration of the organ trio on It's Like That: The organ Trio Anthology 1998—2004 (Jewbilee, 2004) and Fakebook (Hyena, 2004) and a deep descent into the Heart of America.

Heller began to sharpen his focus with specialized projects like 2012's Foolish Me (Westherbird) and Songs with Memories: Skip Heller and Friends Play Floyd Tillman (Weatherbird, 2013). This evolution brings us to Heller's latest and most durable project: the present Hollywood Blues Destroyers.

The Hollywood Blues Destroyers might best be described as a little-big band of vintage character and catholic taste. To date, the band has released two recordings, 2015's Singles Drinking Doubles (Weatherbird) and Here in California (Weatherbird). These recordings are largely acoustic affairs featuring Heller on vocals and his Gretsch parlor guitar accompanied by the singularly talented Lisa Jenio. These recordings provide a generous glimpse into Heller's big-tent talent. Those who have followed Heller can readily hear on these recordings bits of those artists who made Skip Heller, well, Skip Heller: John Hartford; Roger Miller; Bakersfield, California; Jack Teagarden; Pops; and, of course, Elvis Presley.

Heller's appreciation of Presley is appropriately unconditional: he does not just praise the pre-1960s artist while finding nothing in the King's movie years and then, the 1970s. It is the whole enchilada or none of it, as it should be. For the most recent Destroyer recording, Heller has chosen and included seven Elvis Presley numbers that are, at the very least, provocative and iconoclastic. Approaching such a cultural monolith, it is all too easy for artists to accept the path of least resistance and cover the predicable and safe.

No, Heller points his gun at you and says, "Make my Day." His portrait of Elvis Presley is worth breaking down, as only we mere mortals can, when trying to understand what a keen music mind like Heller's values in what is often seen as the American South and, indeed, all of America's most essential and important musical joke. What Heller says of Presley is we cannot have it both ways: we cannot acknowledge his contribution and condemn the man for his fragile humanness. Here are the seven with their respective origins:

Not having a firm grasp on the repertoire, and wanting to be prepared, I asked Heller a couple of questions over Facebook Instant Messenger. This exchange is the essence of Skip Heller:

Me: "Hi Skip: got it today. Did you score all of the horns? I love how you added a deluxe edition of Here in California...the two projects together really represent your evolution...This is a fun disc. How did you choose the EP songs?"

A day later a receive an email from Heller. The text requires nothing of me and as displayed here, reflects how important and serious music is to Heller and how much he feels it should mean to us:

"1) I did arrange all the horns, as I always do. On the Elvis portion, the only horn improvising is Leeav's solo on "Crawfish" (he doesn't need me to write out klezmer music) and Sam's solo on "I've Got a Thing About You Baby."

2) How I picked 'em: I just picked the stuff I always enjoyed the most, a lot of songs I've sung since I had my first guitar. There's nothing on here I discovered later in life. It's all stuff I knew all the words to since I was a little kid. I became an Elvis fan while he was still alive, so these are all songs that are at my musical core.

Also, I thought about how unique Elvis was to his time. He was the first vocal superstar —Caruso notwithstanding —to emerge without the Great American Songbook guiding his path. If he'd had Lieber and Stoller and their peers lighting his way, we'd likely have had a New Testament of that Great American Songbook. But for a number of complex reasons, it didn't turn out that way. So there's this Elvis Canon that exists in some ways within that and in other ways totally away from it. So I chose from my favorites the stuff that pointed to his range. And I stayed away from anything Top 10, although "Such a Night" and "Flaming Star" were both Top 20.

("Such A Night" was written by Lincoln Chase. Look him up.)

Once I chose the tunes, I just arranged to my taste, and I avoided listening to Elvis for a few weeks before we cut. I mostly listened to Lou Rawls and Johnny Hartman. The arranging influences are all my usual guys —Willie Mitchell, 50s Tito Puente, Maxwell Davis, Johnny Pate, Herbie Hancock, Carla Bley, early Ray Charles, and whoever did the mariachi horns on Javier Solis' hits. Also, I cut my vocals the way Elvis cut his —into a hand-held stage mic (which I did on HERE IN CA as well). No autotune or anything. Elvis preferred the Electrovoice RE 15 for recording. I used a Shure SM 58.

Vocally, there's stuff I could never do before. I didn't know how to cultivate the skill to sing most of this stuff until Lisa Jenio came into the group. She's such an experienced singer that she knew how to teach me how to cultivate that skill, and with her help I got to where my range was extended and I got brave. "Such A Night" and "I Met Her Today" are each very difficult to sing. They're as range-challenging as "Alfie.""

That is the unvarnished, serious-as-music, Fred "Skip" Heller. He expects much of his listeners and rewards them with music so rich and clever that it is like having a cold epiphany on the hottest day of the year. This is Elvis I never heard. Why is that? It is because I am an Elvis dilettante in rabid need of a teacher, which is what Heller has always proved to me. His is a demanding, commanding intellect about music, perhaps the most important art in The Arts. Music is not simply important...it is the MOST important, a position I can easily empathize with.

In a stroke of inspiration, Heller augmented what would have otherwise been an EP with a Deluxe Edition of his previous recording Here in California (Weatherbird, 2015). It is a great introduction to his important thoughts on Elvis Presley. We need more of Skip Heller.

For EP Fans Only: The Elvis Variations - Crawfish; Such a Night; I Met Her Today; Flaming Star; I’ve Got A Thing About You Baby; You Ask Me To; In My Way. Here in California (Deluxe Edition) – Here in California; If I Make it to Heaven; City in the Rain; four Rows Back; Trainwreck; Waltz for Two Who Don’t Dance; Beyond These Hills; San Fernando Valley; The Other Side of Town.