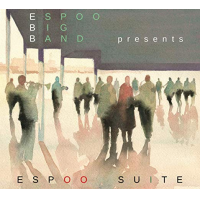 Almost forty years after its inception in 1980, Finland's world-class Espoo Big Band and composer / arranger Marzi Nyman have recorded an often brash and always impressive salute to their home base, the appropriately named Espoo Suite. "This is my attempt to describe [the city]," Nyman writes, "through free-associative composing." The word "free" aptly expresses Nyman's approach to the task, as the music he espouses, even as it nods to a traditional rhythmic and melodic core, is explicitly free-wheeling and sometimes harsh and discordant in the spirit of, say, George Russell, Charles Mingus or Julius Hemphill, among others.

Even so, there is much to admire in Nyman's resourceful charts, which come at the listener from a variety of angles and call upon the ensemble to put its best foot forward at all times. Espoo responds with elan, showing time and again why its stature in the upper ranks of European big bands is well-deserved. In other words, Nyman keeps raising the bar and the band keeps stretching as high and as far as needed to accomplish its purpose. This is especially true in the full-throated ensemble passages, which burst forth at a moment's notice with massive waves of vehemence and power, exhort ing the band to show its collective mettle, which it invariably does.

The suite itself seems to encompass five of the album's half-dozen tracks, as there is a "Finale" (Track 5) followed by the shuffling "Espoo Blues," which was either recorded live or with some privileged spectators invited to the Mimix Studios, where the other tracks were laid down. In any event, there is an abundance of background noise and equivocal chatter from the "audience" and something near the end of the piece that sounds a great deal like dogs barking, guns being discharged and / or fireworks exploding. Meanwhile, the band shows it can play in a more traditional (Count Basie-esque) style, ably undergirding splendid solos by trombonist Jay Kortehisto, pianist Lenni-Kalle Taipale, alto Pope Puolitaival and baritone Mikko Innanen.

As for the suite itself, it begins on a tranquil note with a burnished intro by Innanen and tenor Manuel Dunkel on "Quiet Flows the Aspen River," which gathers momentum and resonance behind Dunkel's engaging solo before closing with a brief yet dynamic coda. There are two dedications, the first of which ("Brotherhood") endorses the band itself, its driving rhythms and powerful ensemble phrases flanking ambitious solos by pianist Taipale and trumpeter Jukka Eskola before fading out on the wings of what seems to be a chant from the band. The third movement, "Igor's Lament," is a dirge-like requiem dedicated to Tapiola Sinfonietta on which altos Puolitaival and Ari Jokelainen share solo honors. "Moonshine Chase," introduced by bassist Eerik Siikasaari, picks up the tempo and intensity, driving insistently forward to a raucous climax (complete with police-car siren) that follows incisive statements by Puolitaival and Eskola, while the grim and largely atonal "Finale" showcases Jarmo Saari's ear-splitting and irksome guitar and the band's dutiful rhythm section.

If this seems a rather mixed appraisal, that pretty much sums things up. High marks for concept and performance, somewhat lower for those intervals in which the music veers from tasteful to disconcerting (even though some listeners may find these passages among the album's more desirable features). The band itself is exemplary; another forty years (at least) would no doubt be warmly embraced, in Espoo and elsewhere.