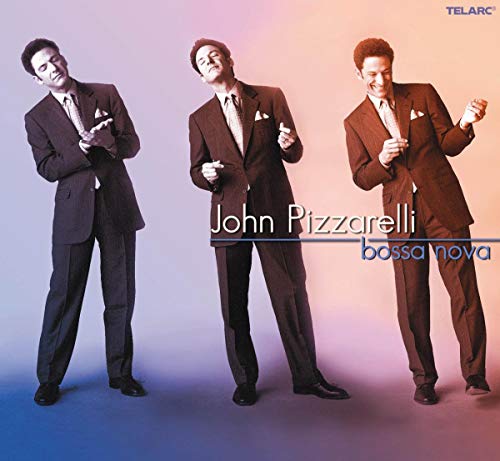 I suspect that it is damn near impossible to dislike John Pizzarelli. His recording Live at Birdland was very well received. He has a potent musical pedigree, is attractive and ultra-talented to boot. The collision between John Pizzarelli, Antonio Carlos Jobim, Joao Gilberto, produces a light jazz classic in Bossa Nova. Bossa Nova is a beautifully executed collection of Bossa favorites and popular songs interpreted in the Bossa manner. Pizzarelli’s guitar playing is perfectly suited for this genre as is his voice. He covers very familiar territory: "One Note Samba," "The Girl from Ipanema," "Estate," and "Desafinado." He adds Latin spice to the Gershwins’ "Fascinatin’ Rhythm" and James Taylor’s "Your Smiling Face." His regular trio of bassist/brother Martin, and pianist Ray Kennedy join him on the recording. Tenor saxophonist Harry Allen is on hand for reed support. Daniel Jobim joins Pizzarelli on back ground vocals and provides the original Portuguese on his grandfather’s "Girl for Ipanema." This disc will appeal to jazz novices because of Pizzarelli’s universal appeal and it will appeal to the well initiated because of his musicality. 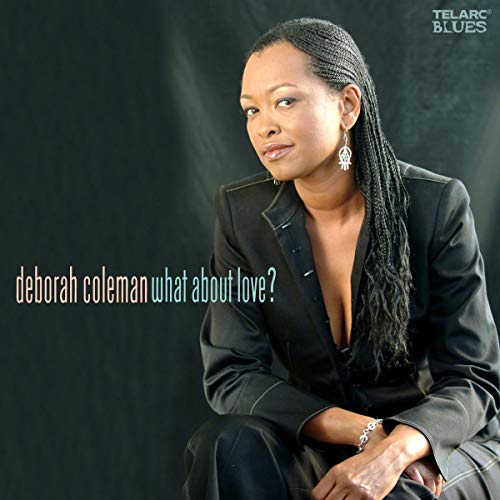 guitarist / vocalist Deborah Coleman’s music has vast benefited from Telarc’s engineering. Where her new recording What About Love may lack the organic bite of one of her independent releases, A Soft Place To Fall , for example, it makes up for round guitar tones and purring Hammond B-3 sighs. Miss Coleman’s spare, studied guitar could be compared to Robert Cray, with the exception that she is a better guitarist. Her slide guitar work, particularly on Delbert McClinton’s delicious "Lie No Better," shows the influence of Little Feat in general and Paul Barrere, Lowell George, and Bonnie Raitt, in that order, in particular. My singe quibble is Coleman’s cover of "When Will I be Loved" which is too much Buddy Holly and too little Linda Ronstadt. While I think that the song could have been arranged better, Miss Coleman’s guitar solo is full of fire and grace. Other highlights include "Healing Ground" which betrays Miss Coleman’s perchance for Keith Richard’s style opening riffs. Her voice and guitar give the song and electric sanctification a la Lynyrd Skynyrd. That song is followed by the swampy instrumental "The River Wild" replete with a tasty slide guitar and fiery lead guitar solo. The title track also contains Miss Coleman’s white-hot guitar playing. A splendid recording worthy of end-of –the-year lists.

Sixty-Nine year old James Cotton still plays like the mainstay he was in the 1950s-1960s Muddy Waters band. Not as fiery as Little Water Jacobs and not as sleek as Junior Wells, cotton brought a rural, organic feel to the Waters band and then into his own solo career. Cotton debuted on Telarc Blues in 2000 with the recording Fire Down Under the Hill and followed that with 35th Anniversary Jam of the James Cotton Blues Band. Telarc dusts off Mr. Cotton and places him in the company of may modern blues dignitaries, all with wildly disparate success. Let’s talk about what works—Marcia Ball’s piano take on RJ’s "When you got A Good Friend’ rock with an urgency. "Rainin’ in My Heart" with C.J. Chenier combines rural and urban blues harmonica with the murky Zydeco of Louisiana. Jimmy Rodger’s "Muleskinner Blues" is effectively presented with Peter Rowan on acoustic guitar and vocals. LeRoy Carr’s "How Long Blues" is nailed by Doc Watson, as is Rory Block on Bill Broonzy’s "Mississippi Blues." This is a good introduction to the late-period James Cotton, who while past his salad days can still pack a convincing punch.

With the recent death of drummer Elvin Jones, sixty-six year old Philadelphia native McCoy Tyner is the only living member of the 1960s John Coltrane Quartet. He has recorded widely over the past 40 years since the saxophonist’s death, making several pivotal recordings. Illuminations is Tyner’s first recording since 2003’s (Telarc). On this new recording, Tyner assembles a heady band of young and old veterans. Notably, it includes saxophonist Gary Bartz, trumpeter Terence Blanchard, bassist Christian McBride, and drummer Lewis Nash. As a writer, I listen to mountains of music and none of it is truly bad. However, rarely is music making this good either. A crack band like this one could make any music sound great. The band shares with Tyner compositional duties, with the music produced being firmly in the durable post bop genre. Illuminations is a superb outing by a true veteran.

Capitalizing on their previous duet outing ( Jazz at the Bistro ) Pianist Benny Green and guitarist Russell Malone this time enter the studio for a relaxed date of old and new standards—expected and unexpected, popular and original compositions. The old standards include a down home "Love for Sale" and a churchy "Moonglow," both featuring Malone’s exquisite chording. Two rare Bird pieces, the title cut and "Passport" inject Be Bop into this mainstream soirée, shaking things up. The "new" standards include Stevie Wonder’s "You are the Sunshine of My Life" (previously covered effectively by Joe Pass), the Roberta Flack hits "Feel Like Making Love," and "Where is the Love." Malone shines in these contemporary pieces, his round tone and intelligent soloing filling in the pop spaces. Oscar Peterson can never be too far away from Benny Green and the pair add the great Canadian’s "Wheatland" to the end of the recital. Benny Green and Russell Malone definitely recall the duet recordings of Oscar Peterson and Joe Pass, if not technically, then in spirit. Empathic communication on this level is never an accident. 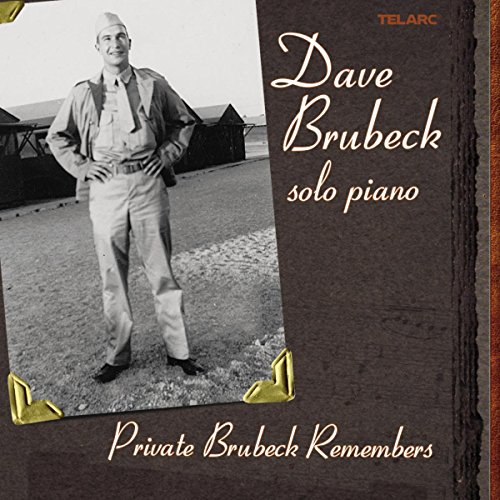 Dave Brubeck is enjoying and extended coda in his career that appears to rival only that of the late Benny Carter. Mr. Brubeck has been recording for 55 years. He has been playing for much longer than that, leading bands as a member of the armed forces in World War II. It is this theme that Mr. Brubeck carries into his new Telarc solo recording, Private Brubeck Remembers. Long associated with his working quartet and octet, when Mr. Brubeck makes solo piano recordings, they are special occasions. The current disc is no exception. Private Brubeck Remembers is a musical memoir, a period piece, recalling songs popular during the Great War. He includes novelty songs such as "Don’t Sit Under the Apple Tree (with Anyone Else but Me)" played in a bouncy stride, as well as plaintive ballads such as "Don’t Worry ‘Bout Me" and "It’s a Sin To Tell A Lie." Mr. Brubeck closes the set with perhaps the most appropriate piece, an impossibly spare and rendering performance of "You’d Be So Nice To Come Home To" that brilliantly transforms in complexity over its six-minute length. Of great interest is the 70-minute interview between Brubeck and Walter Cronkite in which Mr. Brubeck details his and his band’s participation in the Battle of the Bulge. That alone is necessary hearing, especially for those of us with fathers and uncles who are World War II Veterans. This disc and its creator are National Treasures. 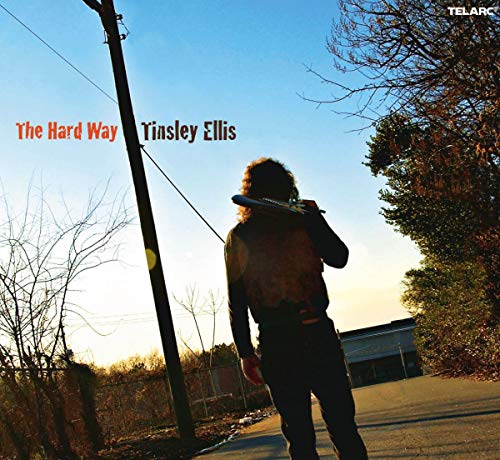 This recording among all of the recent Telarc releases appealed to me the least. That is, of course, not to say that it is a bad recording in any way. Tinsley Ellis has been recording since 1983 and for Telarc since 2002 with he debuted with Hell of High Water . His Indy and major label music has always been durable, if not exceptional blues and R&B. His guitar playing is much better than average and contains a hint of Memphis Soul. The Hard Way to my ears is the most derivative of his many fine recordings. Its inspiration sounds fatigued, lacking in fire. But, Ellis fans should find little wrong with the recording. It contains much of Ellis serrated vocals and likewise guitar playing. Ellis plays much acoustic guitar, giving the disc a folksy, down in the deep bottoms feel. This is a sure pleasure ride for those fans who like the Robert Cray crossed with Tab Benoit.

The Los Angeles Guitar Quartet follows up their successful LAGQ-Latin with a tribute a tip-or-the-hat to an ecclectic group of guitarists. The quartet that defies conventioal description either composed songs in tribute to certain guitarists or in a number of of cases the honored guitarist's own composition. Of note on the recording are the traditional American fare. "B & B" honors Norman Blake and David Bromberg with a sprite bit of Americana and "Blue Echo / Country Gentleman" honors the late Chet Atkins with a swift bit of channel swapping that displays the quartets considerable creative power and maverick spirit. The Jimi Hendrix tribute, "Pluck, Strum, and Hammer" is a percussive tome of soul on soul. It this piece the LAGQ touch their standard quartet soulmates, The Kronos Quartet, sharing that group's spirit of adventure and innovation. LAGQ's Guitar Heroes is a superb introduction to this group of unflinchingly creative musicians.

Visit Telarc on the web at www.telarc.com .