Home » Jazz Articles » Earth Songs: Music after the Age of the Anthropocene

Earth Songs: Music after the Age of the Anthropocene

By Jakob Baekgaard
June 17, 2019
Sign in to view read count
One of the most fascinating things about art is its ability to imagine new worlds. Art can depict a world that is already there, but it can also conjure a dystopia or utopia, a future world around the corner. Whether art should concern itself with the world at all is an important question, but as the effects of climate change are felt increasingly around the globe, it has become apparent that the Earth is vulnerable.

The age we live in has been called the age of the Anthropocene. This means that we as humans have a significant impact on Earth. We are not only the victims of global warming, but also the agents of climate change. Different artists, including musicians, have tried to come to grips with what this means and two of them, Sverre Knut Johansen and saxophonist Pernille Bévort, have created ambitious works that imagine the world outside the human gaze of the Anthropocene perspective. 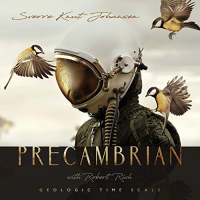 To understand a world without human interference, electronic composer, Sverre Knut Johansen, has done something unusual. He has made a musical time machine that takes the listener 4,6 billion years back in time and moves through eight different geological periods and evolutionary events.

The name of the album is Precambrian and as the title suggests, the album doesn't end with the Anthropocene. Instead the last track goes back to the very beginning, the earliest part of Earth's history, the Precambrian. This somehow suggests that things will go full circle and the age of humans will be replaced by a new beginning that is also old. Certainly, the age of the Anthropocene is not portrayed in a positive light. It becomes a dystopia underlined by using authentic war sounds.

Other sound effects and field recordings also show up. For instance, singing birds reflect the music of the natural world. The Earth sings as natural and electronic sources mix to create an elaborate canvas of sound. The result is cosmic orchestral ambient music with washes of synths and momentary rhythmic movements. Johansen gets assistance from guitarist David Helpling and pianist Robert Rich and they add their distinctive touch to the musical painting. It's an impressive release with a 20-page booklet and a gorgeous foldout chart in the three-panel cover that shows the Earth's development and supports the story told in the music. 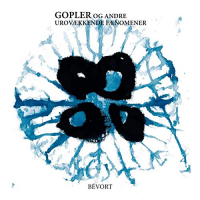 The visual element also plays an important role in saxophonist Pernille Bévort's release Gopler og andre Urovækkende Fænomener (Jellyfish and other Disturbing Phenomena). In fact, the album is billed as a collaboration between Bévort and illustrator Jeppe Grangaard. It's released as a limited-edition vinyl with a 12-page large format booklet.

The physical format is an invitation to dive deep into the universe of the record. If Sverre Knut Johansen escaped the gaze of the Anthropocene through a dramatic movement in time, Bévort takes a shift in space and moves into the water to take the perspective of a jellyfish. The jellyfish also gets a voice in a poem that accompanies the release. Like Johansen foreshadowed the end of the Anthropocene, the poem also speaks about "an invasive marine organism / which celebrates the future world dominance of mollusks."

The music is also like a living organism, combining the languages of music, nature and the human voice. The human voice is broken down into dadaistic fragments while the singing lines of flutes, clarinets and saxophonists sometimes make up a little orchestra like a school of jellyfish. It might be that the record is formally a solo record, but Bévort often uses multiple layers in the music to create a sensory soundscape where the sound of water and birds also emerge.

Grangaard's illustrations add further layers to the story with an abstract and didactic dimension. The didactic aspect is underlined by figures in water and a girl with a sign that says: "school strike for the climate." While it's certainly sympathetic to bring out a clear message, it's the abstract aspect of Grangaard's art that takes up most space on the pages. An example is a giant red circle that looks like a glowing sun. It makes sense because unlike so many other forms of communication that strives to give a clear message, art does something else. It can create a new way of seeing and hearing things and this is what these records do.