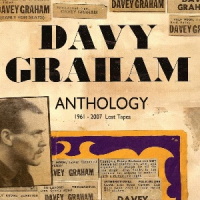 In the sixties, English guitarist Davy Graham acquired near-legendary status as a guitar hero in the folk and blues clubs of Britain, being credited with single-handedly inventing the folk-guitar instrumental, in a way that parallels similar work in America by John Fahey. Although Graham never achieved (or sought) the fame and fortune his music deserved, he was hugely influential on a generation of musicians that included such notables as Paul Simon, Jimmy Page, Ray Davies, Martin Carthy, Bert Jansch, John Renbourn, Ralph McTell, John Martyn and Nick Drake.

This three-disc anthology contains 54 tracks covering Graham's career right from the acetate of his first audition through to recordings of his final tour in 2007 (the year before he was diagnosed with lung cancer and died of it.) The three discs cover the years 1961-63, 1965-70 and 1970-2007. Beyond those broad time frames, although the album makes much of the fact that it features "lost tapes," there is no great detail about the times and places where the recordings were made; there are plenty of live recordings and a radio broadcast. Respectively, the three discs could have been subtitled "early days," "heyday" and "retirement and rediscovery"; together they convey a clear picture of Graham's musical trajectory across this period.

The album opens with five tracks recorded at that first audition, three of which feature Graham singing, including "Hallelujah I Love Her So" and "Careless Love." All are strong, confident vocal performances, but it is Graham's guitar accompaniment and breaks that repeatedly grab the attention, going far beyond routine chords and melody lines; with greater detail and unexpected twists and variations, Graham's distinctive playing was a quantum leap up from the folk guitar of others at the time. This is even more starkly obvious on the purely instrumental tracks. Remarkably, among his five audition tracks Graham includes a stunning version of Dave Brubeck's "Take Five"—an unbelievably daring choice for a folk player in 1962 and one that emphasizes that Graham's guitar playing owed as much to jazz as to folk and blues, a point later emphasized by his versions of Nat Adderley's "Worksong," Charles Mingus' "Better Git it in your Soul," and the original "Tristano," titled for pianist Lennie Tristano.

Straight after the audition tape comes a historic 1961 recording of Graham's most famous piece, "Anji" (also known as "Angi" or "Angie"), on which he talks about its genesis before launching into a fine version of it. In the sixties, the piece was part of the repertoire of any aspiring folk guitarist, and became familiar to many listeners through a version included on Simon and Garfunkel's album Sounds of Silence (Columbia, 1966) in the sleeve notes of which Simon referred to Graham as "one of England's finest jazz/blues guitarists." From its simple opening melodic line, "Anji" develops and adds layers of detail, at times sounding like a guitar duet rather than a solo (in fact, rather than solo, Paul Simon used to perform it as a duet with his brother Ed!) As well as that 1961 version of "Anji," a later recording of the piece is also included, plus "Anji's Greek Cousin," a Hellenic variant with a slightly different tuning. As his career progressed, Graham experimented with different tunings, being a pioneer of the DADGAD modal tuning. Hand in hand with that experimentation, he also developed an increasing interest in eastern music, and "Blues Raga," the album's longest track at well over ten minutes, is evidence of that, including Indian percussion alongside Graham's guitar which at times sounds uncannily like a sitar.

Those already familiar with Graham's music will find plenty of new discoveries and pleasures to savor here. Lovers of guitar music and of cutting-edge experimentation who are not yet acquainted with Graham's music are in for a treat. Highly recommended.