By NENAD GEORGIEVSKI
November 22, 2014
Sign in to view read count 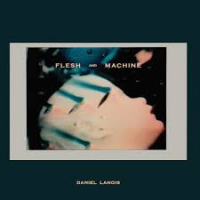 Credit should be given where it's due. Producer/musician Daniel Lanois has never been satisfied with just keep churning out the same kind of music for the same kind of audience that swooned over his song based records or the productions he did for other artists. As a true artist he wants to evolve and continuously create something different and Flesh and Machine is a move in that direction. Lanois' work cuts a distinctive swath through the last 30 years of electronic, rock and pop music, and unlike the song based records he has been releasing, Flesh and Machine is a different affair of the heart.

For this record, Lanois had the idea of producing cinematic sounds of the future and it carries that sense of exploration typical for the records he has made. Flesh and Machine is a term that Lanois has coined to indicate the relationship between technology and musician's skills to produce the human element within the music produced on machines. Much of today's electronic music is presented as exclusively individualistic yet democratic, but in fact, this democratization of music in general has brought such homogenization that literary everyone sounds more or less like everyone else. Resulting from the acquisition of more or less the same equipment, utilizing the same treatments, sonics and approaches has contributed largely to an avalanche of sound-alikes and character-devoid music.

But, Flesh and Machine is a record with a strong sense of direction, experimentation and risk taking. It is a record that is looser and oilier, more limber and dangerous. It bounds and writhes with its own life force as it was built from his own musical sources i.e. manipulation and sampling of real instruments, ranging from electric and laptop guitars, to piano, bass, drums and a human voice, and a slew of studio gear (without any synthesizers). As a producer and someone that is devoted to the "studio as an instrument" approach, he has imbued the records he produced with such distinct and full of character ambiances, textures and sounds that is difficult to be mistaken for someone else's.

This record balances and shifts between past, present and future as partially it mines and samples Lanois' past and caries it to the future. It carries the melodic traits of some of his records, like the ambient explorations of Belladona (Anti, 2005) and the ragged and edgy rockish sound of the Black Dub band he fronted, but the blend is so unbalanced and dynamic, and is building up on approaches from the past.

The opener "Rocco" is a short ambient piece full of processed tender vocal chants by singer Rocco DeLuca that almost resemble keyboard lines, layered over minimalistic piano touches. This gentle intro soon bursts into "The End," a duet between the drummer Brian Blade and Lanois' guitar in Hendrix untamed fashion. The tension between the no-wave guitars and the barrages of drums and cymbals seems to just erupt in a volcanic manner. It's a live track that has been heavily processed with Lanois using his studio skills and vast arsenal to shape it. "Sioux Lookout "is a multi-layered piece with strange vocalizations over a thumping beat soon layered by flourishing drums much in the manner of the song "Shine" from the same record. It pulsates and bleeps where the strangely constructed vocalizations give the impression of a futuristic tribe in full motion. It is an intricately architected piece of work that unleashes a myriad of images.

"Tamboura Jah" is a quietly dynamic piece that evokes the eerie and secluded ambiance from the Sling Blade Soundtrack, with a minimalistic guitar line echoing in the background as on "Asylum" from the same soundtrack. Filled with long and hook free movements, "Two Bushas" turns into beautifully layered repetitive and pulsating sounds that create intriguing textures, both light and dark. All the component parts work in miniature and these shards of sounds, movements and ideas gradually merge into one despite their wildly different timbres. The slow movements of the steel guitar on "Space Love" evoke the tender and darkish moments of Belladona. Lanois performs miraculous alchemy on this track as he manipulates the sounds and the dub effects, and as a result he subtly creates both ambiances and melodies out of the echo effects. Often the charm in these compositions is in the spaces Lanois so artfully leaves between notes.

All throughout, he maintains a slow, spectral pace. "Iceland "is a beautiful piano piece with Pink Floyd-esque melodies colored with unobtrusive and intricate sound delicacies in the background. Both "Iceland" and "My First Love" feel more like pop tunes and are more approachable that the previous part of the record which is more experimental. "Opera" is more upbeat while "Aquatic" is dominated by the watery sound signatures of his pedal steel outpouring a burst of flowing edgy melodies.

For someone as technically accomplished as Lanois surely is, and with so many unique and divisive ideas in mind, Flesh and Machine never succumbs to being just a set of sound exercises set to tape. Trying to figure out what he is doing on this record and how he arrives at shaping these sound sculptures is part of the beauty. Lanois knows his way around sound design, of course, and every track has this level of sound design-as-composition approach. It has an enigmatic internal logic that is intriguing and beguiling. Pablo Picasso once said, "If you know exactly what you're going to do, then what's the point of doing it?" For most part, Lanois has been threading uncharted territories that see him expanding his vocabulary and palette of sounds.