By C. MICHAEL BAILEY
December 6, 2012
Sign in to view read count
The vocal ensemble Seraphic Fire hails from the warm climes of southern Florida. Brainchild and progeny of Patrick Dupré Quigley, the group assembles a passel of singing smarty pants who have been making their way through the standard vocal repertoire since their founding in the early 2000s. Since that time, the group, recording for the Seraphic Fire recording label has released several notable recordings, two of which (Johannes Brahm's Ein Deutsches Requiem and A Seraphic Fire Christmas) were nominated for 2012 Grammy Awards. 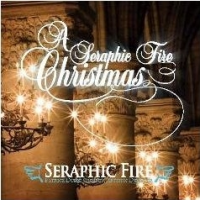 A Seraphic Fire Christmas is, hands down, the best a capella Christmas offering since Chanticleer's excellent We Sing Christmas (Teldec, 1995)). At a time when every popular music, country, jazz, and novelty act believe they can produce a worthy holiday disc in search of the legal tender, if not the nod from the Divine, it is gratifying that the "old" music still can demand and hold the attention and imagination of a listenership whose attention span grows shorter with every breath. And without one electronic effect.

The ensemble Seraphic Fire is an assembly of vocalist centered in the South Florida area and led by Patrick Dupré Quigley, Founder and Artistic Director of Seraphic Fire and the Firebird Chamber Orchestra. The group released its debut recording on its flagship label Seraphic Fire, Beginnings in 2005 and followed it with Amazing Grace: A Bluegrass And Gospel Journey in 2007; Shalom/Pax and Handel's Messiah in 2008; and Monteverdi's Vespers, 1610 in 2010. The group covered Bach's Brandenburg Concertos with a spin in their Brandenburg Project in 2011 where the Firebird Chamber Orchestra made their debut live.

The group released two recording projects in 2012: Johannes Brahms' ein Deutsche Requiem and the present A Seraphic Fire Christmas. This collection starts at the beginning with a plain chant "Pater Noster," a polyphonic "Ave Maria," an informative "Adeste Fideles / O Come, All Ye Faithful," and a magisterial "O Magnum Mysterium." The set ends with the more modern English staple, "Once in David's City" and "Tomorrow Shall Be My Dancing Day," all the way to "We Wish You A Merry Christmas. This is holiday music, specifically Christmas music to revel in and be proud of. 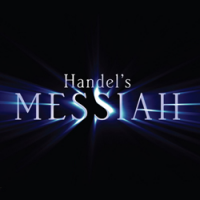 Recorded live at the Guzman Center for the Performing Arts in Miami just short of Christmas 2006, this abbreviated (limited to the Christmas section) Messiah program is given a lively reading by the chorus and the Seraphic Fire Chamber Orchestra, precursor to the present Firebird Chamber Orchestra. The tempi tend toward the middle, not as brisk as Paul McCreesh's 1997 Archiv recording nor as slow as the late-Romantic performances. The opening "Sinfony" resists at moments but is quickly replaced by a bright "Comfort Ye" and "Every Valley" paring, sung with pristine clarity by tenor Vincent Davies.

"For Unto Us A Child is Born" bounces with its own momentum, continuing to pick up and crackle with energy as it barrels forth in the program. Another choral highlight, "Glory to God" bristles with this same electricity while navigating some of Handel's trickier composing. This well-toned choral singing carries itself through "His Yoke is Easy" and "All We, Like Sheep" into the show-stopping "Hallelujah." This is the deal breaker of many a Messiah performance and Seraphic Fire discharges itself admirably under Quigley's propulsive and intention-driven direction. It would have been nice to hear Reggie Mobley sing "He Was Despised" but all in all, this is a fine live performance. 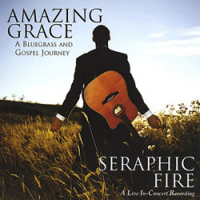 This is not strictly holiday fare but in the Spirit anyway. Amazing Grace: A Bluegrass and Gospel Journey is Seraphic Fire's qualitative answer to Chanticleer's superb 1987 release, Where The Sun Will Never Go Down (Teldec). It is largely a collection of American spirituals performed in ensemble with director Quigley playing piano. The pieces range from the early 19th through the late 20th century. While not as uniformly fine as the Chanticleer collection, Amazing Grace is nevertheless a provocative assembly, bringing into close proximity artists as different as Hank Williams, Sr. ("I Saw The Light") and Andre Crouch ("Through it All") and Roberta Martin ("God's Amazing Grace") and Albert Brumley ("I'll Fly Away").

Speaking of "Amazing Grace," it is the theme of this recording, being offered in a number of different harmonic settings differing from William Walker's original original melody. The Fire present several different traditions for this storied song, giving a mini-history of the piece. This collage of "Amazing Grace" coupled with the triumph of Georgia Tom Dorsey's "Precious Lord, Take My Hand" make the entire collection valuable as an aural relic of worship in singing. This music explodes with all of the goodness ascribed to "Americana," readily illustrating gospel music's enduring influence on American popular music.