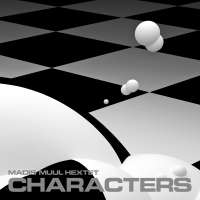 When cast in the light of antiquity, jazz is typically seen as vintage rather than retro. Yet in the case of Estonian pianist and composer Madis Muul, the latter would seem more apropos. In addition to featuring a full band, Characters is also privy to his adeptness with "old-school" synthesizers, flavoring the album with a touch of '80s cool mixed with contemporary sounds. Regardless of the subgenre into which he decides to place his songs, he clearly has an ear for music that is easy to listen to, making it accessible to those who would normally balk at anything outside their usual comfort zone.

Muul has arranged a large octet including bassist Raimond Magi, drummer Hans Kurvitz and guitarist Pent Jarve. They are also complemented by four clarinetists: Martin Kuusk and Daniel Aljo, respectively doubling alto and tenor saxophone, as well as Hans-Jurgen Kruus and Marten Altrov on bass clarinets. Despite the horn-heavy lineup, Characters never becomes a blowing session. Instead, Muul's compositions utilize his players in whichever way best serves the mood he is angling for. The party grows to a nonet on "Paper Animals," which features vocals written and performed by Marta Aliide Jakovski, and on "22:22 AKA Stargazer," featuring Achille Succi, yet another clarinetist, who splits the dreamy song in two with a guest solo.

Characters stands as a dual-meaning title, coming from both Muul's work writing live music for the theater as well as people he was inspired by, both fictional and real. Due to this connection, some of the music contained in the album has a slightly thespian poise. Forward-thinking songs like "Melancholistic" and "Cubist" are the sort of well-written jaunts in which he shows promise as an arranger, leading a large group through his compositions while managing to utilize the full breadth of the musicians available to him. The album isn't all serious. He demonstrates that he knows how to have fun on "Camel," wherein he lays a marching beat that challenges his menagerie of horn players to twist around it like separate gusts of wind through a narrow, crowded copse of birch trees. Calling upon his theatrical experience, he is capable of incorporating humor into even the most earnest production.

As a debut album, Characters augers a promising future for Madis Muul. While not a runaway masterpiece, Muul and his octet have taken to the effective approach of leveling their gaze both forward and back.