By JACK BOWERS
January 8, 2008
Sign in to view read count 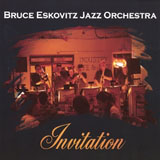 
The Bruce Eskovitz Jazz Orchestra is actually a tentet that sounds appreciably larger, thanks to resourceful charts by the leader and inspired blowing by all hands. The group's second recording, Invitation, more than stands its ground against the first (Regions, Backstage Records), which this reviewer praised as "both cerebrally and aesthetically rewarding.

As before, all of the arrangements are by Dr. Eskovitz, as well as seven of the ten compositions. The exceptions are Bronislau Kaper's "Invitation, Freddie Hubbard's "Red Clay and Herb Ellis' "Detour Ahead, the last an overlooked gem that's always a pleasure to hear, especially when played with passion, as it is here. Eskovitz, whose expressive tenor sax points the way, divides the chart in two, the first half "dark and mellow, the second "a la Stan Kenton, and it works splendidly, as do the other themes. "Damien's Dance is a minor blues Jazz waltz, "Just in the 'Newk' of Time a shuffling salute to the great Sonny Rollins (based on Rollins' "Doxy ), "One Last Time" an old-school gospel jubilee, "A Walk in the Park a gentle refrain "that hearkens to a warm summer's day. Eskovitz adds a pinch of salsa to enliven the ardent "Latin Fever, "Breakthrough and "Dialogue.

Even though the BEJO isn't quite a big band, don't let that dampen your interest. As the saying goes, "If it walks like a duck and quacks like a duck . . . In other words, the tentet sounds like a big band, and Eskovitz' tasteful charts assure a pleasurable listening experience. Explicitly recommended.

Indeed, there are moments when the fire burns so intensely that one can almost picture Scaletta urging the ensemble to "play it the way Stan would! The charts are faithful to the originals, and even the most temperate ballads ("Send in the Clowns, "Over the Rainbow, "Rendezvous at Sunset, "Here's That Rainy Day ) are punctuated by spine-tingling outbursts reminiscent of the formidable Kenton brass. Brass and percussion, as one would assume, are paramount on the snappier numbers, from Holman's "Fearless Finlay and "Cuba Jazz to Russo's "23 Degrees North, 82 Degrees West, Paich's "The Big Chase and the aging but indefatigable "Peanut Vendor. Splendid soloists abound, with tenor Don Mikiten showcased on "Lover Man, baritone Charlie DeChant on George Gershwin's "Rhapsody in Blue, trombonist Steve Smith on "Rainbow. Other standouts include Scaletta; trumpeters Steve Walters, Ed Gaston and David Jones; alto Eddie Marshall, trombonist Pat Gullotta and drummer Barry Smith who keeps the rhythm section on its toes and cooking, as he did so ably on Volume 1. There are charming vocals by the Freshmen-like David Pryum Singers and Ellen Davis on "September Song, and by Davis alone on a fast-paced treatment of "The Thrill Is Gone.

This isn't Kenton, but even Stan's staunchest admirers would have to concede that there are times when it comes pretty darn close. This is especially true of the flag-wavers — "Fearless Finlay, "Cuba Jazz, "The Big Chase — which fairly leap from the speakers to cauterize one's ears. Scaletta hasn't put together a garden variety pick-up band; these gentlemen are pros who have done their homework and come to play. And to ice the cake, Volume 2 boasts a playing time of more than seventy minutes compared to only thirty-four for Volume 1. Even though Kenton was always looking forward and wanted no ghost bands playing his music, this is a heartwarming tribute that surely would have caused him to smile.


The St. Paul, MN-based Nova Contemporary Jazz Orchestra has produced an album of Christmas music that is "odd only in the sense that it is unique, shining fresh light on nearly a dozen seasonal themes written and / or arranged by Minnesotans. It's a pity that albums like this aren't ordinarily released until the season is actually upon us, as the unfavorable timeline undoubtedly lessens their perennial appeal and with it their potential audience; the "holiday label, useful as it may be, renders the argument that many of these charts deserve to be heard throughout the year largely irrelevant.

As holiday albums go, An Odd Christmas is second to none, and in many respects transcends the season. Put another way, it's a splendid big-band session whose theme happens to encompass Christmas and the music that exemplifies its observance. Pleasurable listening at any time of the year. 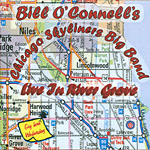 
Live in River Grove represents a departure for drummer Bill O'Connell's Skyliners Big Band, as it marks the first recording on which the ensemble has backed a singer all the way. While the album's secondary title reads "Featuring Leslie Beukelman, that could easily be reversed to read, "Leslie Beukelman Featuring the Chicago Skyliners Big Band, as her perky voice is heard on all save one of the album's sixteen tracks, and the band is clearly there to underline her talent.

One's response to that may depend, in no small measure, on his or her fondness for band singers in general, and for this one in particular. One must concede that Beukelman has an amiable voice and sings well enough, but her lyric interpretations, although smooth and well-rehearsed, are short on depth and awareness, flaws that further seasoning will no doubt redress. She does show promise, and will no doubt learn, as others have, that there is more to a lyric than simply reciting it; one must also understand its basic purpose, which is to inspire an emotional response from one's audience.

On the plus side, the charts, by Matt Harris, Don Menza, Roger Myers, Kirk Garrison, Sammy Nestico, Mark Taylor and others, are impressive, as is the band, and there are a number of succinct but engaging solos by saxophonists Bob Frankich and Ken Partyka, trumpeter Terry Connell and trombonist John Mose. Connell and Partyka are showcased on the lone non-vocal selection, Michel Legrand's "Summer's Way. Returning to the album's title, one would assume that Live in River Grove denotes an audience, but there's no hint of one anywhere, even though O'Connell writes in the liner notes that the band was recorded in concert at River Front Park. Well, he should know; he was there, so it must be true. Not bad for what it is, but keep in mind that it's essentially a singer's album with a big-band backdrop. 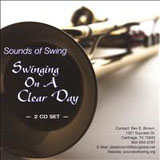 Sounds of Swing
Swinging on a Clear Day
Self Published
2007


There was a time not long ago when dance bands were music's royalty, and names like Miller, Goodman, Dorsey, James, Elgart, Anthony, Flanagan, Lombardo and others were box-office gold. Inevitably, musical tastes changed and dance bands were reduced to an afterthought, severed from the massive wave of popularity that had once carried them to cities, towns and hamlets across the country. Luckily, a few of their progeny remain active, laboring to keep the memories alive in the face of financial hardship and widespread apathy.

One such band is drummer Bev Brown's Sounds of Swing, which "has been spreading the gospel of big band music throughout northeast Texas / northwest Louisiana since 1992. Given the status of contemporary dance bands, SOS seems an appropriate acronym to describe the ensemble and its travails. Nevertheless, these mostly part-timers have pressed forward under director Jerry Hale, performing regularly and recording occasionally. As an example of the latter (there were two earlier albums, both recorded in concert), SOS has released an amiable two-disc studio date, Swinging on a Clear Day, which revisits a number of time-honored big band themes to help remind today's listeners why they were so popular in the first place.

"Blue Moon, "A String of Pearls, "When You're Smiling, "A Foggy Day, "Cherokee and so on — yes, you've heard them before, presumably many times — but like fine wine, these songs improve with age, and it's always a kick to hear them again, especially when played with ardor and assurance, as they are here. Of course, every dance band from the golden era had its own singer, and SOS boasts not one but four including Brown, who takes his turn on "Candy. The others are Grady Kyle ("South of the Border, "A Nightingale Sang, "I've Got You Under My Skin ), Terry Dorsey ("Cheek to Cheek ) and Janis Compton ("Blue Moon, "Our Love Is Here to Stay, "Life Is Just a Bowl of Cherries, "The Man I Love, "A Foggy Day, "Orange Colored Sky ). Compton's day gig, by the way, is high school principal in Lufkin, TX.

While the charts do accommodate concise solos by trumpeters Dorsey, Kyle and Ron Ashcraft, saxophonists Mike McGowan and Lynn Cooper, trombonist Ken Barnes and others, the music is more for dancing than analysis, and thus more comparable to Miller, James and Dorsey than Basie, Herman or Kenton. In other words, an essentially sedate and pleasant stroll down memory lane.


Tracks: Breakthrough; Damien's Dance; Invitation; Latin Fever; Detour Ahead; Just in the 'Newk' of Time; Dialogue; A Walk in the Park; Red Clay; One Last Time (60:45).


Tracks: Who Can I Turn To?; Darn That Dream; I Just Found Out About Love; My One and Only Love; Watch What Happens; How Do You Keep the Music Playing?; All Right, Okay, You Win; Teach Me Tonight; 'Deed I Do; The Very Thought of You; I've Got You Under My Skin; Misty; They Can't Take That Away from Me; The Way You Look Tonight; Summer's Way (Theme from Summer of '42); Almost Like Being in Love (xx:xx).

Swinging on a Clear Day


Tracks: Disc 1 — On a Clear Day; When Your Lover Has Gone; Blue Moon; Laura; South of the Border; A String of Pearls; The Very Thought of You; Stompin' at the Savoy; Our Love Is Here to Stay; Stormy Weather; Candy; Look for the Silver Lining; Life Is Just a Bowl of Cherries; Artistry for Trumpets (xx:xx). Disc 2 — How High the Moon; The Man I Love; When You're Smiling; A Nightingale Sang in Berkeley Square; Cherry; Night Train; A Foggy Day; In This Whole Wide World; Cheek to Cheek; I've Got You Under My Skin; Cherokee; Orange-Colored Sky; In the Mood (xx:xx).