By C. MICHAEL BAILEY
March 7, 2015
Sign in to view read count
The sweeping emotional reach of Johann Sebastian Bach's Suites, BWV 1007—1012) cannot be underestimated. Heard performed incandescently on two different instruments helps also. Throw in the Sonatas & Partitas for Violin, BWV 1001-1006, on the lute and you have a Bach free-for-all. 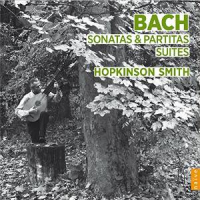 Johann Sebastian Bach's Sonatas & Partitas for Violin, BWV 1001-1006 and his Suites for Cello, BWV 1001-1006 were never intended to be strictly for the violin and cello, respectively. Bach was very utilitarian in his composing, making arrangements for multiple instruments. Lutenist Hopkinson Smith takes on both composition collections in the present 4CD Naïve set.

Bach certainly wrote music specifically for lute, most notably his works for solo lute, BWV 995-1000. But Bach always saw the lute as an expressive and expansive instrument and made it a point to compose and transcribe for it. Smith brings a provincial dance vibe to these pieces, drawing out the innate rhythm that pulses in all of Bach's work. Smith's performances are tactile and earthy, yet refined, infused with the same dance spirit as are Michael Praetorius' fine Terpsichore (1612). Smith's performance of The Suite No. 1 in G major emphasizes the sensitive, sensual nature of the piece, revealing a living, breathing Bach not often heard in performance.

Is there any remote reason for yet another recording of the Suites for Cello? In a short answer, "yes." The reason being that there is only a small select amount of music that exists in the critical emotive DNA of the human unconscious and these suites are just such music. What does the young cellist Isang Enders have to tell us that Casals, Rostropovich, and Ma have not already? Well, it is that in Bach, there can be gleaned a sweet urgency and anticipation if performed just so through the intellectual prism of a musician's thoughts,

Enders strikes a compromise between the technical Bach and those expectations that go with it and the Bach humanity. His playing is creamier and more homogenous than Casal's superb readings while taking Ma's modernist approach further. The sarabande of Suite No. 5 in C minor is a study in expended sadness while the Prelude to the Suite No. 1 in G major is an anxious trot past a cool graveyard, hoping for deliverance. Bach remains more relevant today than at any time and there can never be too many recordings, only recordings not heard.