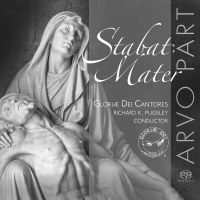 The late Twentieth-and early Twenty-First-Centuries have been a rich and productive period for sacred choral composers. Sir John Tavener (1944 -2013), Krzysztof Penderecki (1933 -2020), Henryk Górecki (1933 -), and Tigran Mansurian (1939 -) are just a smattering of modern talent behind this ancient form. Estonian composer Arvo Pärt sits atop this collection of composers with the distinction of being the most performed, living composer today. Like Tavener, Pärt's conversion to Eastern Orthodoxy intensely colored his compositional themes. The composer's keen ear draws from 1000 years of choral writing shone through the prism of the Massachusetts-based choral/orchestral ensemble Gloriæ Dei Cantores, who pay homage to Pärt with a collection of his spiritual settings composed between 1985 (Stabat Mater) and 2008 (L'abbé Agathon)

Gloriæ Dei Cantores ("Singers to the Glory of God") addresses religious choral music from medieval to contemporary. The group is affiliated with the Church of the Transfiguration in the town of Orleans, on Cape Cod, where it performs weekly services. The ensemble is a mixed-gender adult choir with 40 members founded in 1988 where it transformed from an amateur group into the present professional configuration by Elizabeth Pattersonand is now under the baton of Richard Pugsley. The group has recorded since 1989, when it debuted with the collection of Catholic Mass settings, Easter Day Mass, featuring Eleventh Century Gregorian Chant mixed with pieces by Palestrina (c. 1525 -1594), Frescobaldi (1583 -1643), and Jean Langlais (1907 -1991).

The group's full discography includes some 60 recordings ranging from traditional Gregorian Chant to Herbert Howells, including the notable recent releases Rachmaninoff: All-Night Vigil, Op. 37 (Paraclete, 2017) and Gorden Myers: God's Trombones (Paraclete, 2018). The only question regarding the group addressing Pärt's choral work was, "what took so long?" The group has had Pärt as part of its repertoire for many hears, honing their performance to what is presented here.

Presented here are settings for six religious texts ranging from the pastoral aire of the Coptic story of "L'abbe Agathon" to the composer's arresting meditation on the Magnificat (Luke 1:46-55). The opening "Peace Upon You, Jerusalem" is Pärt's treatment of Psalm 122, featuring two sopranos (Rachel McKendree and Sister Amanda Ortolani) and women's chorus singing a cappella. This is the airiest performance on the recording, like a brief whisper in the ear of the Divine. The Marian hymn Salve Regina ("Hail, O Queen") features organist James E. Jordan supporting the entire chorus. The reading gravely consonant with lengthy melodic lines carefully drawn from the chorus.

The Nunc dimitis is the traditional Gospel Canticle of Compline (The Night Office). Also known as the Song of Simeon, the text derives from the Gospel of Luke, Chapter 2, verses 29 through 32. Sister Amanda Ortolani again is featured in a solo soprano role. It is a hymn of peace and acceptance, a request, a prayer for release. The full chorus is the breath upon which the Ortolani gently walks.

The centerpiece is the title composition, Stabat Mater ("Sad Mother"). The text is a 13th-century Christian Marian Hymn, portraying the Blessed Virgin's suffering at the foot of the Cross. It was composed by either the Franciscan friar Jacopone da Todi or Pope Innocent III, and its title derives from the first line, "Stabat Mater dolorosa," which means "the sorrowful mother was standing" (in translation, "At the Cross her station keeping..."). Many composers have written settings for the text, including Lassus, Palestrina, Vivaldi, both Scarlattis, and most notably, Pergolesi. With respect to Pärt's setting, the composition illustrates the composer's musical technique "tintinnabuli." Half mysticism, half grounded theory, Pärt described the method in his comments on Tintinnabulation from arvopart.org:

Tintinnabulation is an area I sometimes wander into when I am searching for answers—in my life, my music, my work. In my dark hours, I have a certain feeling that everything outside this one thing has no meaning...Here I am alone with silence. I have discovered it is enough when a single note is beautifully played. This one note, or a moment of silence comforts me. I work with very few elements—with one voice, with two voices. I build with the most primitive materials with the triad—with one specific tonality. The three notes of a triad are line bells.

...the lingering sound of a ringing bell that occurs after the bell has been struck. That concrete image is translated aurally in Pärt's Stabat Mater. The piece is sprawling with the composer addressing each of the text's 20 sections differently, interspersing instrumental dance rhythms that smack of the late Baroque. Triads dominate the piece: tintinnabuli character, a trio choir made up of soprano, alto, and tenor voices and a three-part string section of violins, violas and cellos. Gloriæ Die Cantores performances equal or better the many Pärt recitals found on ECM records and elsewhere. The super audio hybrid programming pays off with an efficiently realized presence that is warm without being stuffy and crystalline without being sharp edged. These performances are significant additions to the Pärt discography.