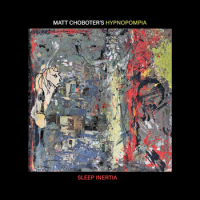 Young Canadian pianist-composer Matt Choboter has been busy these last six or seven years developing projects that differ markedly from each other in style and instrumentation but together reveal an ever-adventurous, questing musical personality. In his first Songlines release he presents music inspired by the psychological state called hypnopompia ­– the state of consciousness leading out of sleep. It mirrors the hypnagogic state at sleep onset, but the two have different phenomenological characters. Both however typically involve perceptual distortions and sometimes hallucinations. Beyond the psychological, this music embraces South Asian classical music’s nuanced polyrhythms and extended time cycles, refigured in the context of contemporary creative music, jazz and ambient music.

“…the intricacies of the music were essential to internalize, but I became more and more focused on deconstructing, blurring formal elements and creating more moment-to-moment creative choices for us, collectively. On several pieces I wanted the conceptualizations – which were often the rhythmic frameworks – to dissolve away like beach sand receding into the ocean tide. The musical goal was always to forge bridges between the cerebral and subconscious. A shifting interaction where there might emerge disorientation, ambiguity and illusion.” As Choboter writes in the booklet, “these compositions and improvisations attempt to evoke personal hypnopompic content – embodied dreamscapes, real and imagined places in the world and archetypal characters. We, the band, explored and sonically fleshed-out these landscapes and processes. The pieces perhaps nurtured deeper subconscious shared experiences.”

Jungian psychology has certainly influenced Choboter’s thinking about creativity and nurturing a relationship with the subconscious: “…the pathways toward collective subliminal experiences converge in the need for exploring a kind of inner child. Basically, staying curious and open to new experiences. I think this is why the music has changed quite a lot since 2019. I’ve invited more possibilities into exploration, essentially. On the surface this could manifest through preparations – bolts, pieces of wood between the strings of the piano – or in the case of clarinet, guitar and bass, the use of electronic pedals. The greater prominence of electronics is perhaps a reflection of this need for exploration but also an identification with the overarching metaphor of moving from the dream-world into wakefulness. Electronics traverse this liminality, but more importantly for me are symbolic of wakefulness, and the mechanistic and technological ‘waking world’ we find ourselves in.”

The record’s title refers to the time around 2018-2019 when Choboter was writing and starting to workshop the music in different cities: “Insomnia pervaded much of the periods of work and so it became a theme for me…Sleep Inertia became an appealing title as it kind of encompassed my general ‘being in the world’ for those years, which involved living in some liminal plane where vestiges of sleep will simply not wear off. For instance, imagined colours, sounds, tastes and smells. Often, a random event would trigger a far-off sense memory that I hadn’t experienced since early childhood. Some sounds, smells or tastes I couldn’t even identify with a previous experience or memory.

Choboter’s studies and formative musical experiences include a B.Mus in jazz performance from Capilano University in North Vancouver (2014); a stay in Chennai, South India, where he was drawn to the rigorous rhythmic practice of Carnatic music (2015); and studies in Montreal with Jean-Michel Pilc and in Paris with Benoît Delbecq, the latter part of his Masters program at Copenhagen’s Rhythmic Music Conservatory, where he is now completing a 2-year Postgraduate Research & Composition Diploma creating what he calls the microtonal prepared piano. Although he name-checks Steve Coleman, Vijay Iyer, Henry Threadgill, Miles Okazaki and Ben Monder as earlier compositional influences, he considers Hypnopompia as beyond jazz: “…the overarching psychological ideas, the methods of compositions and dramaturgy relate to a contemporary classical and experimental context. But given the instrumentation and the improvisations I believe this project still relates more to a post-jazz aesthetic.”

All About Jazz musician pages are maintained by musicians, publicists and trusted members like you. Interested? Tell us why you would like to improve the Sleep Inertia musician page.