A Peter White Christmas at Yoshi's 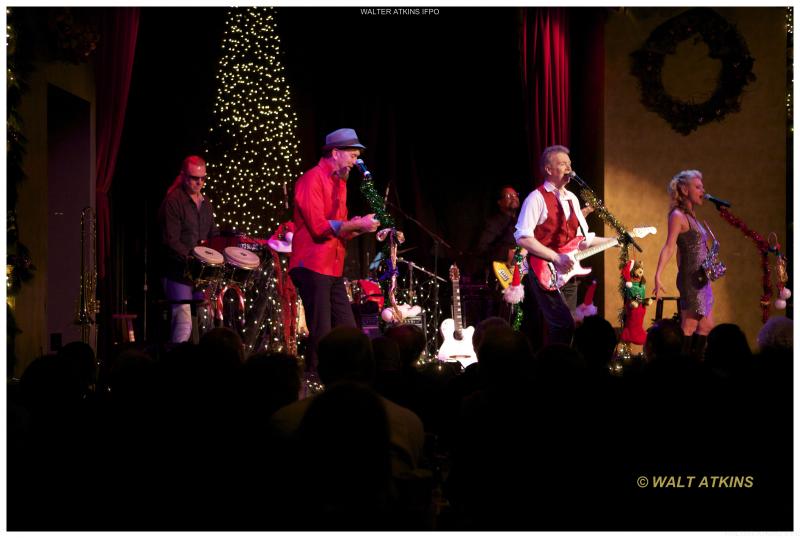 A Peter White Christmas, featuring Rick Braun and Mindi Abair, was a great way to enjoy the holiday season. Both Yoshi's Oakland shows were sold out and the 8 pm show was jam-packed with folks ready for the guitarist's annual Christmas concert.

The all-star group started playing Christmas classics, encouraging the audience to sing along to favorites like "Winter Wonderland "and "No Place Like Home For The Holidays." The hip early show was filled with a fun festive spirit from start to happy finish. During the lively set, there was a feeling of genuine camaraderie amongst all the band members. The joyful holiday spirit was reinforced with Christmas decorations on the walls—and on stage, with a 20-foot tree complete with lights.

The versatile guitarist and his friends performed "Head Over Heels" and "Smile," the title track from his 2014 Universal release. The show kicked off with Braun's "Sleighride," from his 2012 Christmas CD Swingin' In The Snow and selections from Can You Feel It (2014). Abair said she didn't have a Christmas CD, so she contributed tracks from her Wild Heart (2014), performing the title track and "I'll Be Your Home." Featuring music legends Booker T. Jones, Gregg Allman, Joe Perry, Trombone Shorty, Keb' Mo' and many others, the album has already received a 2015 Grammy nomination for Best Contemporary Instrumental album. Her first song had a smoky guitar intro and Braun played a mean trombone on her second selection.

People in front of me were rocking out to the group's rousing music and the guests at my table exchanged Christmas presents. White explained how he learned to play guitar by the radio and "never had a lesson." Growing up in a small English town, he listened to The Beatles and Black Sabbath, saying that "Ozzie [Osbourne] ... was the king," but within a year he was also listening to Joni Mitchell. As he continued talking, Abair playfully interrupted him to say they were going to play Mitchell's "River." Braun joined on congas and drummer Stevo Theard also contributed as they slowed the pace down for "River," with both White and Abair sitting down for the intimate song.

Theard and Nate Phillips formed a fine foundation for the band with a timely solo by the bassist during the show. White and the entire group did an a cappella version of "White Christmas" in The Manhattan Transfer style as Theard took center stage with his strong vocals. During the song, Braun paid tribute to Louis Armstrong with his singing style and added, "I like Louis." Nate Phillips sang the bass parts.

It was a sparkling ensemble show that highlighted the spirit of Christmas as well as the formidable talents of the musicians. Theard sang "Silent Night" to a very enthusiastic crowd that cheered during the tune. Abair did a sultry Eartha Kitt-flavored version of "Santa Baby" with a black bola. White treated the audience to an entertaining "Blue Christmas" Elvis style, complete with Presley wig, pork chop side burns and hip gyrations. Ron Reinhardt contributed cool keyboard work throughout the evening.

To close this satisfying show, Braun played his trumpet while walking through the appreciative crowd and stopping at tables to serenade the ecstatic patrons. As he worked his way to the rear of the club Abair joined him. As a tribute to our Armed Forces, Abair performed "Boogie Woogie Bugle Boy."

The Yoshi's Oakland Christmas crowd gave the band a spirited standing ovation. The sparkling Peter White Christmas has been an annual event for eleven years and I'm adding it to my holiday calendar for next year.