Lance Conrad is a forward thinking guitarist, bandleader, composer, and arranger who currently attends the USC Thornton School of Music. Born and raised in Palm Springs, Conrad started as a classical guitarist and ventured to Spain to study with Pepe Romero, Margarita Escarpa, and Scott Tennet. Despite his success in the classical genre, Conrad shifted his musical voice towards Jazz upon listening to Bruce Forman's Coast to Coast.

At Thornton, Conrad has played under the direction of Vince Mendoza, Bob Mintzer, Alan Pasqua and currently studies with Bruce Forman and Aaron Serfaty. Using these influences, Conrad has begun to foster his own sound through founding Strictly Trio. Strictly Trio mainly performs original compositions and arrangements of Jazz standards. As a bandleader, Conrad is dedicated to conveying stories through his music. 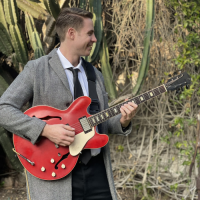 All About Jazz musician pages are maintained by musicians, publicists and trusted members like you. Interested? Tell us why you would like to improve the Lance Conrad musician page.