By MARSHALL TAYLOR
August 28, 2011
Sign in to view read count 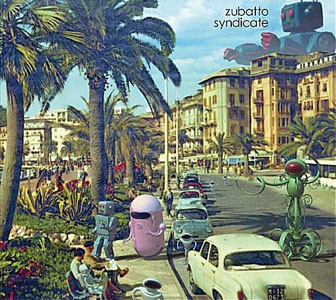 Seattle's Zubatto Syndicate—the brainchild of longtime resident and guitarist/composer Andrew Boscardin—are anything but the typical footprint in the sand. Pervading the musical spectrum to touch on genres as disparate as classical and ska punk, the group's self-titled debut is an epitome of the band itself: a radical fusion of familiar musical ideas esoteric enough to intrigue the ear, yet domestic enough to entertain it.

A graduate of Seattle's Cornish College of the Arts, the compositions show time and time again Boscardin's ability to balance the urbanity of a well-rounded musical training with the colors and expressionistic powers of a natural, free form approach to style. The opening "Arrival" is an excellent case in point. After the ambient introduction (evocative of The Mars Volta, circa 2006) fades and Boscardin churns out the sludgy single-chord rhythmical motif found more prominently in the works of Tom Morello than Jimmy Bruno, an antagonistic force quick to foil the mood set by the guitar is brought in by a horn line so rich and dense in its tonal layering that even the finest of contemporary big band composers would melt in their Oxfords.

Perhaps the one thing this album does better than anything else is avoid monotony among the choruses, by allowing each one to play within the property of a given genre-specific paradigm. "A Brief History of Time Travel," for example, features a sultry hip hop-oriented cross-stick backbeat, while the up-tempo, distortion-heavy "Mechas Over Manhattan" emanates the punk and metal flare often associated with jazz acts such as Zu and Errata.

While the choruses are the center piece of the album, the solos are certainly nothing short of the gold trim. Although Boscardin's compositions are aesthetically sound enough to provide a rather specific rubric, the band members (some of Seattle's finest improvising talent) know how to work within the playing field. The saxophone work of Greg Sinibaldi, Mark Taylor and Jim Dejoie leaves nothing to be desired, and, along with the other wind instruments in the ensemble, features some of the finest harmonic layering heard in some time.

Zubatto Syndicate is certainly a work rich in content and progressive intent. Unlike several of their progressive predecessors, however, it manages to achieve what most popular music today seems to view as taboo: a musical and cultural amalgamation of black and white, night and day, and body and spirit.

Arrival; Saturn 9; The Trouble With Earth Women; Inspector Automation; The Green Boy From Hurrah; Mechas Over Manhattan; The Abyssal Jungle; Ares and Gaia; A Brief History of Time Travel; The Zubatto Song; Lords and Ladies of Venus.