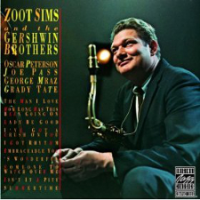 Zoot Sims And The Gershwin Brothers

The Concord Music Group inaugurated their celebration of the 40th anniversary of Norman Granz's Pablo Records with the releases of John Coltrane: Afro Blue Impressions (Pablo, 1963/2013) and Sarah Vaughan— Sophisticated Lady: The Duke Ellington Songbook (Pablo,2013). These releases are to be followed by an additional five remasters, the first of which, Zoot Sims And The Gershwin Brothers, is considered here.

Recorded in New York City at RCA Studios, June 6, 1975, Norman Granz paired Sims (1925-1985) with a dream rhythm section consisting of pianist Oscar Peterson, guitarist Joe Pass, bassist George Mraz and drummer Grady Tate. This assembly was charged with recording from the wealthy George and Ira Gershwin songbook, at which time, the stars fully aligned and Zoot Sims And The Gershwin Brothers was created, not from earth, air, fire and water, but from grace, experience, knowledge and talent.

I recall once being asked, in 1985, what was the best record I had heard that year and I responded, "Jefferson Airplane's After Bathing at Baxter's." I have always been a keeper of the flame of the old guard and with Zoot Sims And The Gershwin Brothers I see no migration to otherwise in my outlook. It has been several years since I had listened to this recording and I have listened to a great deal of Harry Allen and Scott Hamilton since, so respinning this Sims was a bit of a revelation. As great as Allen and Hamilton are, Sims' performance on this Gershwin collection eclipses all other tenor outings of the same stripe, yesterday or today.

Zoot Sims may have been informed by Lester Young and Ben Webster but he sounds only like Zoot Sims: confident, muscular, robust. And while Sims could hold his own with lesser rhythm sections, Granz insured he did not have to because of the then deep Pablo roster. Granz sported only seasoned and well-proven talent at a time when rock music ruled. Peterson and Pass tamp down down the harmonic tethers of this group, soloing as only they could. Children of pianist Art Tatum, Peterson and Pass have the chops but never over-exercise them. That was always part of their considerable charm. The opening "The Man I Love" illustrates this. Peterson and Pass immediately pass the melody for virial improvisation equal to that of the leader. Taken at a breakneck tempo, the quintet throws genius off like sweat flying from a boxer's face, deliberate, practiced, exact.

Sims obviously followed the jazz admonition that in order to play a song properly one had to know the lyrics covered. The two takes of "I've Got A Crush On You" illustrate Sims' deep understanding of not only the lyrics, but the shows these songs came from. He dishes the much worn "I've Got Rhythm" in big helpings. Peterson and Pass both join in the exuberance, having played this be-bop nugget about a million times in other forms. Peterson is restrained, avoiding Tatum-inspired over-playing. He is pitch and tempo perfect. Pass is likewise. Absent is the wordiness of their solo performances. They provide the leader a support rarely achieved. There is no equivalent in the contemporary mainstream vernacular.

The remastering process captured Sims' tenor in a reverb glow appropriate to it. Crisp are drummer Grady Tate's rim shots and cymbal throbs. Bassist George Mraz, who a brief two years later would make music history with alto saxophonist Art Pepper at New York City's Village Vanguard, provides solid timekeeping. This music- making may be too much inside-the-lines for some, but is easily the best recording I have heard this year.


Tracks: The Man I Love; How Long Has This Been Going On; Oh, Lady Be Good; I Got Rhythm; Embraceable You; 'S Wonderful; Someone To Watch Over Me; Isn't It A Pity; Summertime; They Can't Take That Away From Me; Oh, Lady Be Good; I've Got A Crush On You.