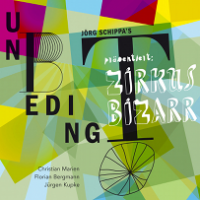 Berlin-based guitarist Jorg Schippa imparts the best of German engineering with his estimable associates. Take a little off-center Frank Zappa like trickery; high-octane organic/acoustic jazz rock, and morph with chamber-like ambience then add complex progressive jazz and European folk into the big picture. Somewhat remarkably, the band possesses a unique identity with a signature sound and line of attack, fronted by Schippa and the dual clarinet attack of Jurgen Kupke (The Clarinet Trio) and Florian Bergmann. At times, the unit asserts a rhythm-heavy disposition via precision-oriented beats amid lithe detours, thorny unison choruses and gobs of counterpoint among the soloists. They also experiment along with a few movements that could seemingly serve as the backdrop for ballet, coupled with passages devised on idiosyncratic, odd-metered grooves.

"Terrier" is a glaring example of the quartet's ingenuity. Here, drummer Christian Marien kicks it off with a regimented march progression, leading to contrasting unison choruses and weaving navigations of the perky theme. They occasionally border the fringes of classical music, and the soloists embark upon a few choruses, consisting of animated three-way dialogues and razor-sharp, offbeat deviations. Yet the musicians sustain a pliant line of attack, framed within a fluidly moving but disciplined methodology. During the bridge, the artists tunnel through avant-garde terrain and lash out with a bit of angst, and cycle through a straight-four rock pulse before revisiting the opening motif towards the finale. Nonetheless, the ensemble's stylistic and extensive conceptual approach is extraordinarily cohesive and spawns thrills a minute. (Passionately recommended...)