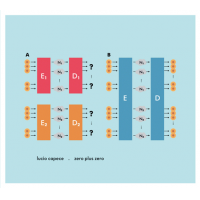 His Potlatch debut, Zero Plus Zero is the first solo recording from Berlin- based, Argentinean Lucio Capece. Recorded in Berlin between 2009 and 2011, it chronicles the ongoing evolution of his music, an evolution that has seen him move from focusing solely on soprano saxophone and bass clarinet to increasingly adding preparations to his instruments and employing the drones of the harmonium-like Indian sruti (or shruti) box. While soprano saxophone and bass clarinet are featured here on one track each, the album's more dominant sounds are electronics and the sruti box.

The opening track, "Some Move Upward Uncertainly," consists solely of drones from the Indian instrument, eloquently demonstrating why a growing number of musicians are employing it as accompaniment. Compared to the steadiness of electronically generated drones, the hand-operated bellows of the sruti box ensure considerable variations in its tones, giving musicians a greater sense of humanity and creativity. Significantly, Capece dedicates the piece to the late Harley Gaber, whose music (notably, the stunning drone piece, The Winds Rise in the North) displays its own sense of humanity.

The prolonged track "Zero Plus Zero" is a soprano saxophone showcase, with Capece applying (unspecified) objects to the horn as preparations; in the past this has included extending the bell of his horn with cardboard tubes or plastic bottles, bowing the bell or inserting ping-ping balls. Here, the overall effect is of Capece duetting with himself, combining the saxophone's conventional sounded notes with a range of effects—metallic ringing, air through tubes, clattering—into a sound collage that is endlessly fascinating and engaging.

On the remainder of the album, three extended tracks are parts of a wide-ranging four-part piece entitled "Inside the Outside." On the first two, Capece makes extensive use of electronics, combining them with the sruti box and other sound sources (including "tuned backyard"!) to produce music far removed from his reeds playing. The end results are a testament to Capece's sense of musicality, as he weaves the disparate elements of the soundscape into a coherent whole that is underpinned by a very satisfying low-frequency thrumming.

The relatively brief "Spectrum of One" consists of intermittent pure sine waves and serves as a palate-cleansing interlude before the third part of "Inside the Outside." As on the first two parts, the underpinning bass sounds are present, but now they are combined with Capece playing bass clarinet, sometimes prepared with cardboard tubes. This creates a bottom-heavy piece overlaid with higher, breathier sounds, this part being compatible with the earlier parts and just as pleasing. It concludes an album that is a richly varied listening experience and demands to be heard repeatedly, as it reveals new treasures every time.