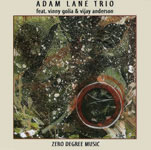 Jazz fans often lament the irretrievability of the past. Many are the numbers who bellyache about the present absence giants on par with Mingus, Coltrane, and Miles. To those with their ears nostalgically fixated on the past masters, I heartily recommend auditioning some Adam Lane. Calling Lane the next Mingus, or the next William Parker for that matter, may ring like empty and needlessly aggrandizing hyperbole, but when it comes to his improvisational and compositional acumen such comparisons aren't as cockeyed as they might seem on paper.

With longtime idol Vinny Golia and colleague Vijay Anderson joining him on a program packed completely with originals, Lane quickly illustrates what all the ballyhoo surrounding his growing body of work is all about. Golia limits his storied bottomless instrument satchel to two lonely delegates—tenor and soprano. The self-imposed economy translates into some very direct and explosively expressive blowing. Anderson is a new name to me, but he manages to sleekly keep pace with his partners. All compositions arise from Lane's fecund imagination. Most pivot on themes and rhythms that blend the rich sonorities of the three players with a warm and earthy affect, with Lane's talent for shaping centripetal ostinatos at the fore.

The punchy free-bop of "To Avenue X gets Zero Degree Music off to a bracing and instantly appealing start. Lane's bass is room-filling in size and athletically articulated, probably the finest sounding upright I've ever heard captured in the CIMP Spirit Room. He plucks and snaps out a tensile sprinting line that anchors while it propels; meanwhile, Golia's tenor gesticulates with a continuous spray of notes beside him. Anderson's drums are a cymbal-suffused blur that easily adjusts to a median tempo downshift and the three wrap the tune up in a swift four minutes. "Spin with the EARth finds Golia on soprano and adopting a questing limpid approach akin to that of Joe McPhee, especially in the coda. Lane shows off more amazing chops, his ensuing solo crammed with all sorts of knuckle-flexing techniques from precision stops to florid flamenco-style strumming. A similar balance in instrumentation and execution unfolds on the lengthy and engrossing "Intonations for Being, with the three locking on synergistic groove.

"In Our Time forms out of spectral arco harmonics, fluttery tenor breath tones, and splashing cymbal waves. By the midpoint the three are once again whipping up a rambunctious racket of oceanic overlapping energy, but the ardor eventually dissipates into a ruminative dénouement rife driven by more impeccable bowing from Lane. "Clouds unfurls atop another febrile bass line, Golia's tenor locuting against the rotund pop and snap of the leader's beautifully voiced strings and a spacious cadence by Anderson. The remainder of the program yields music on par with the previous, capping off "Relaxing with Vinny where the trio goes out the way it came in via another window of potent perambulating free-bop. Players like Lane, Golia, and Anderson self-effacingly serve as active reminders that jazz is a long way from dead.

Visit Adam Lane on the web.

To Avenue X; Spin with the EARth; In Our Time; Intonations for Being; Clouds; The Genius of El Segundo (for Lynn Johnston); Dance; Relaxing with Vinny.