Zebra at the NYCB Theatre At Westbury 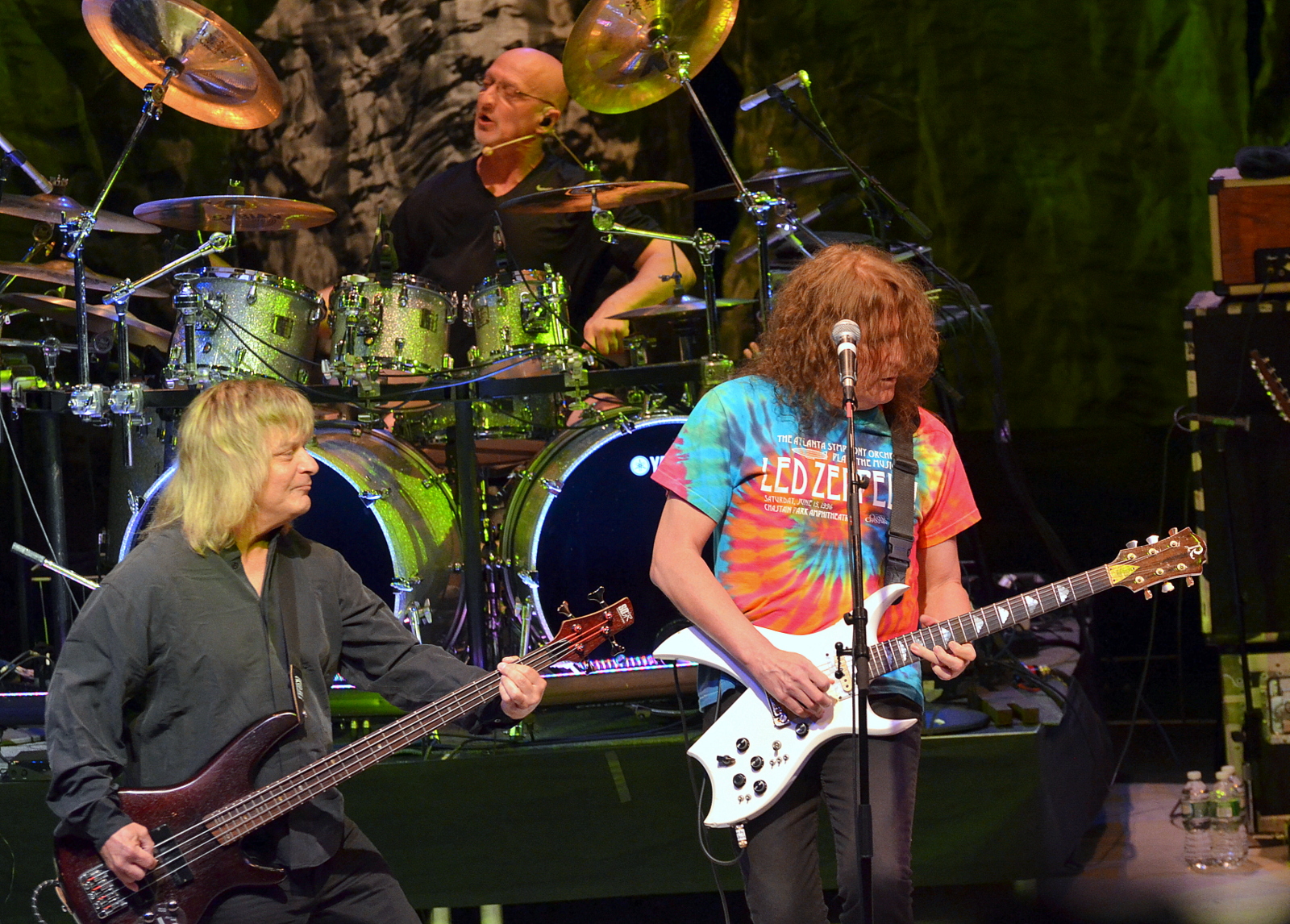 Zebra is a legendary power trio in two noted musical "hotbeds"—New York and New Orleans. Unfortunately, they are underappreciated in the rest of the U.S. Those who have "discovered" the band are well aware of the dynamic energy and musicianship of the players as well as the strength and intensity of Zebra's performances.

For those not in the know—Zebra was founded in 1975 and is comprised of Randy Jackson (guitar & vocals), Felix Hanemann (bass, keyboards & vocals) and Guy Gelso (drums & vocals). The band first came to prominence as a Led Zeppelin cover band. After paying their dues gigging around its hometown of New Orleans and in the Long Island area, the band signed a recording contract with Atlantic Records. Their eponymously titled debut album (Atlantic Records, 1983) contained the popular songs "Tell Me What You Want" and "Who's Behind The Door." That album became what was, at the time, the fastest selling debut in Atlantic Records history, peaking at #29 and staying on the Billboard charts for eight months. Zebra supported the debut by touring and opening for Loverboy, Cheap Trick and Journey. Over the years the band has opened for Molly Hatchett, Survivor, REO Speedwagon, Sammy Hagar, Kiss, ZZ Top and Aerosmith. Additionally, groups such as Queensryche, Bryan Adams and Dream Theater have, in turn, opened for Zebra. Over the years the band has released a number of well-received albums, including No Tellin' Lies (Atlantic Records, 1985), 3.V (Atlantic Records, 1986), Live (Atlantic Records, 1990) and Zebra IV (Mayhem Records, 2003). Though recording sporadically, the band members continue to perform together (in addition to solo and sideman projects) in intimate venues across the country.

The last day of May was a pleasant Saturday evening. The Long Island faithful were milling about in the NYCB Theatre parking lot, tailgating and renewing decades-old friendships based on their love of the band. The celebrations and stories were more a mass gathering of old friends than a bunch of individual groups having mini barbeques and small parties. The sounds of Zebra's catalogue wafted across the blacktop as these superfans reminisced about the past before entering the cozy Long Island arena to see their adopted local heroes.

Prior to Zebra taking the stage Youth Be Told, a four-piece local band comprised of local 14- and 15-year-olds, took the stage. The group announced its presence with a loud bang. The opening number was a note-perfect rendition of Rush's "Spirit Of Radio." It was immediately obvious that these were not "your typical teenagers." These kids could play! Comprised of guitarist Lennon Ashton, vocalist Jessica Kantorowitz, bassist Alex Taub and drummer Madden Klass, Youth Be Told's performance was strong, polished and incendiary. Mixing originals like "Crashing Down" and "Words Without Meaning" with covers of Led Zeppelin ("Heartbreaker") and Janis Joplin ("Piece of My Heart") and bluesy classics ("Train Kept A Rollin'" and "Crossroads"), the members of Youth Be Told showed a musical aptitude and maturity beyond their years. Collectively, as evidenced by its song selection, Youth Be Told showed an encyclopedic knowledge of classic rock. Kantorowitz has the strong pipes and stage presence to not only sound believable but credible while belting out vocals made famous by Joplin, Robert Plant and Geddy Lee. Taub handled the intricate bass lines with aplomb. Klass kept perfect time and was a powerhouse behind the drum kit. John Bonham and Neil Peart would have been proud. Ashton's stellar guitar skills, if not instantaneously apparent by the ease with which he handled the leads on the Rush and Led Zeppelin covers, were further highlighted during the closing number, "Crossroads," on which he traded riffs, licks and leads with Zebra's axeman Randy Jackson. This band is going places. It isn't often that an opening act gets a standing ovation. Youth Be Told not only received a standing ovation and raucous applause, it deserved both. The band's self-titled six track EP (Independent, 2014) was produced by Jack Douglas (Aerosmith, John Lennon, Cheap Trick) and is available on iTunes.

ADVERTISEMENT
After a short intermission, during which the crowd got even more excited in anticipation of seeing Zebra, the lights dimmed, a spotlight shone onto the stage, and WBAB disc jockey, Fingers, appeared. Sounding more like a gushing schoolgirl than a radio professional, the jock introduced the band and the crowd went wild.

Opening with "Arabian Nights" and roaring through "About to Make the Time," Jackson and his bandmates paused only long enough to remind the audience about the evening's rock CAN roll® charity (to beat hunger) raffle (the winner of which received a guitar signed by the members of Zebra). Jackson then came forward and announced that "we'd like to dedicate the next song, 'Angels Calling' from Zebra IV to Youth Be Told."

Zebra had the mostly middle-aged crowd eating out of its hands. The band delivered exactly what the audience expected and wanted—an evening of fun, Zeppelin-flavored rock with a nod to the tasty guitar licks that Jackson has used to drive the music for almost forty years. On this evening the band's main set consisted of eighteen songs. In addition to the expected "Tell Me What You Want," "He's Makin' You The Fool," "As I Said Before," "Wait Till The Summer's Gone" "Bear," and "One More Chance" (which have become staples of the group's live performances), the band played songs from all phases of its career as well as a cover of Led Zeppelin's "Rock And Roll."

The players in Zebra are master musicians. Hanemann effortlessly switched back and forth between keyboards and bass guitar. Gelso's backbeat drove the band. Jackson's guitar and strong vocals were spot-on. His use of falsetto vocals on some of the songs fit so well into the arrangements that it sounded much like another instrument. Jackson's versatility was also on display when he strapped on the acoustic guitar for "Who's Behind The Door."

The main set ended with "Take Your Fingers From My Hair." The stunning version of the song had the audience on its feet, playing air guitar and singing along with the performers. At the end, the band left the stage but only for a minute. They returned to play "Don't Walk Away" and "The La La Song." The extended version of "The La La Song" included Gelso's powerful, yet tasty drum solo. During the solo, Jackson and Hanemann retreated to the back of the stage so Gelso could bask in the glory of his virtuosity. As the solo came to a close, Jackson and Hanemann returned to their instruments for the song's (and the show's) big finish. When the song ended, the band left the stage and made its way to the merchandise table to shake hands, sign CDs and meet its adoring public.