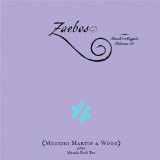 Just take a moment to absorb this disc's exhausting title; yeah... this probably isn't what you should pick up after drawing the name of your Erskine Hawkins-loving grandpa when figuring out whose Secret Santa you're going to be; that is, unless said grandpa has a penchant for atonal, acid-tinged klezmer-jazz. Hey, you never know. To the uninitiated, this title certainly might seem, on the surface, somewhat imposing. "Should I first check out Volumes 1-10? Will I have the slightest clue what is going on?" Zaebos definitely serves as a solid jumping-off point for those who initially might find John Zorn's own music a little too overwhelming, Medeski Martin & Wood translating his work into a funky, accessible, groove-oriented experience. John Medeski (keyboards), Chris Wood (bass) and Billy Martin (drums) infuse 11 of the composer's spiritual instrumentals with the trademark blend of jambient jazz that quietly made them one of the top-drawing acts of the jamband scene.

It's necessary to surrender all expectations for this disc to occupy easily the rest of the familiar MMW canon. In fact, the challenging opener "Zagzagel" appears to exist in order to weed out any stragglers not yet ready to submit. Survive through but half of the first song, however, and things will become much clearer. By the fifth track "Chafriel," you'll feel like you're listening to the soundtrack for the fourth entry in the Oceans' Eleven series...albeit one that involves the epic heist of a row of jewelry stores in the Hasidic Diamond District! Don't think you've gotten off easy, though, because Zaebos takes plenty of unexpected musical turns into the land of the modal and even atonal. At one point it sounds like Martin actually drags a piece of wrought-iron furniture across his patio while his bandmates groove independently. Not so surprisingly, it works. This music never feels pretentious, only exciting and even celebratory. MMW fans will no doubt embrace this as another unpredictable-yet-enjoyable entry into their steadily growing discography.