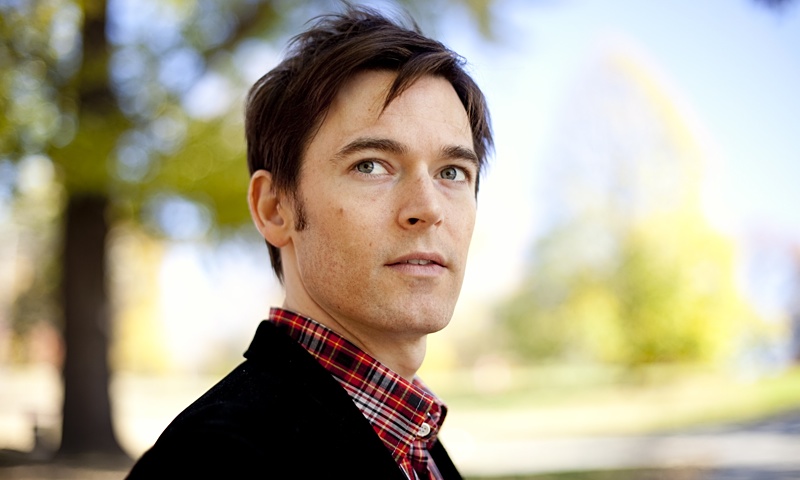 About a month or so ago, I had the pleasure of performing in a duo setting with violinist Zach Brock. I've known Brock for years; we met and played together a few times in New York City. However, this was our first time really playing in a creative, intimate setting. Brock is, in my humble opinion, one of the best—if not the best—jazz violinist out there today. Although as you'd expect, he has the classical training, but he is also very genuinely steeped in the authentic jazz tradition. But he isn't a purist at all; he's influenced by any type of music you could imagine. He's already gained exposure as a bandleader and as a sideman with Stanley Clarke.

George Colligan: What are your earliest musical memories?

Zach Brock: My earliest musical memories involve sitting at my mom's feet under our piano bench. I suppose she was working on some Brahms or Schumann lieder. I used to hang out down there quite a bit. Plus, the dog would hang out down there with me. The hang was totally happening. I started going to violin class when I was four, so my earliest memories of music-making are of being in violin repertory class on Saturday mornings, playing the couple of pieces that I knew, getting really hungry, and then hanging out until the oldest kids had finished their pieces.

When I was seven, these Saturday morning classes started seriously cutting into my Bugs Bunny & Friends time, so I decided to quit. I begged my teacher to take me back a day later. Besides playing the violin I was in a Men & Boys choir until I was twelve and I got to perform a lot of great modern Anglican choral music (Vaughan Williams, Britten, Rutter), as well as the classics (Bach, Händel, Purcell). We also had a family band. That's where I started learning how to improvise.

GC: How do you make the violin swing?

ZB: One does it in the same way on the violin as on any other instrument: by listening to other players on any axe who swing and then by mimicking their time-feel, tone, phrasing, etc. I believe that it is exactly like learning a language, and by that I mean specifically that your brain and body will naturally find the necessary muscle movements needed to reproduce the sounds that you need to communicate. In my years of teaching I have written technical exercises for students who were struggling with their bowing concept but I found that if they couldn't hear "it" then they couldn't feel "it" and that was the reason that they weren't swinging.

GC: Who are your biggest musical heroes?

ZB: After making a huge list that included all of the usual suspects (Bird, Sonny Rollins, John Coltrane, Miles Davis, Herbie Hancock, Wayne Shorter, Zbigniew Seifert, etc.), I realized it was reading like an old MySpace page. I listen to the same players that all jazz connoisseurs listen to. The two musical heroes that I'd like to distinguish are my college violin teacher, Dr. Myron Kartman, and my closest jazz mentor, Phil Markowitz. Both of these musicians gave me their knowledge and musical wisdom so that I could build upon it and make it my own. They both encouraged me to develop my strengths and gave me the awareness and perspective necessary to address my weaknesses. I didn't get a system from either one of them. They gave me the tools to build my own system.

GC: What is your approach to composition?

ZB: I have yet to settle on a specific approach to composing and it can be a struggle for me. I'm currently experimenting with a new approach where I challenge myself, regardless of whether I start a new composition at the piano, or any other instrument, to be able to represent the piece entirely on the solo acoustic violin. After I can do that, I'll notate a reduction/lead sheet so that I can play it with other people. I'll wait to do a full orchestration/arrangement of the new piece only when I have a very specific context, like a recording or a tour.

GC: Was it tough to move to New York? What's you take on the scene in New York now?

ZB: It was very tough moving to New York from Chicago. I had been living in Chicago for almost thirteen years and I had to make a musical and personal separation with some of my closest friends at a time when I had already started working on a career in music. My wife and I both gave up a lot in the move. After being in New York now for seven years I've finally retired my urge to vilify the city for being the pain-in-the-ass that it is. It feels like home. As far as my take on the scene, I don't feel totally qualified to opine because I operate on the periphery of several scenes. That's something I would like to remedy in the future.

That being said, it's the only place in the world where I could have met and played with you [George Colligan], Phil Markowitz, the guys on my last record, etc. I still secretly flip out when I walk into my bodega and there's some guy in there buying eggs and I have all of his records! I love that aspect of the music scene in New York. It keeps motivating me in the most primal, immediate way. I realize that any given day could be the day I finally play with "that guy" and I want to make sure that I show up as the musician I want to be in that situation.

GC: What advice would you give to young jazz musicians?

ZB: If they want to be professional performers on the world stage then I would advise them to recognize the distinction between developing their playing and developing their careers; to work at both with as much focus, energy, and intelligence as possible, and to learn how to manage their time. I think this concept is somewhat easier for younger musicians who didn't grow up in the "young lions" era because the "Do-It-Yourself" skill set is now seen as a strength instead of a weakness and the necessary information is readily available.

I remember when older musicians would ridicule younger musicians for putting out their own CDs, telling them that it was bullshit, they were bullshit, that the internet was watering down the meritocracy of jazz, and a lot of other misguided things. Now Sonny Rollins is DIY. So is Branford Marsalis. The stigma of putting out your own CD is passé. You have to learn how to do everything in your career now because there is no mainstream illusion that someone is going to come along and put you on the world stage while they write your blog for you and book your gigs. Coca-Cola sells Taylor Swift by promoting her as DIY-savvy, whether that's even true or not. At the same time, if you don't work equally hard at your craft as a musician then you will be exposed as "sad" a whole lot faster than you would have been in the past. YouTube and HD video on everyone's phone can and will show you at your best and your worst. There's no escaping it and it's not going away.

ZB: I have a few things going on right now. First, I'm writing/arranging a new record for Criss Cross. Second, I'm working with Phil Markowitz to get our new CD, Perpetuity, released. And third, I'm working on an unaccompanied, acoustic violin project. Most of the playing I do in jazz requires a certain amount of amplification because I like to play with drummers. But lately I've been getting more and more into the violin in its most natural state. I really love the freakish amount of variations possible for tone color, articulation, dynamics, etc. I also find the limitations of creating harmonic complexity on the acoustic violin to be a very rewarding challenge. It definitely deepens and clarifies one's linear concept on the instrument.