Nathan & Jessie: You're The Star

By LJUBINKO ZIVKOVIC
May 27, 2019
Sign in to view read count 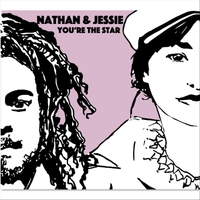 For a younger generation of musicians, it is often a daunting task to get into so-called older musical forms, particularly those connected to jazz. Usually, they have two paths on offer—slavishly following the route taken by the prominent artists whose steps they are trying to follow, or letting their imagination flow freely and combining musical elements as if they were their own. Either way, if you want to come up with something good, you have to really accumulate musical knowledge and even be able to emulate a certain style.

Of course, there is nothing wrong with reproducing good music, whatever period it comes from, but it is those artists that try to combine, or in effect bring something new to the old, that come up with the best music. Australian C.W. Stoneking mixes everything from old blues and Dixieland to boogaloo and R&B, and London's Kansas Smithy's House Band do the same with any jazz form at hand, just two of the relatively new artists being inspired by 'older' music forms.

Nathan Rivera and Jessie Andra Smith, going simply under their first names as Nathan & Jessie are relatively new to this revival concept with two albums behind them, That'll Never Be Me (Nathan & Jessie, 2018), and You're The Star. Their starting point is Jazz Manouche and the music of Django Reinhardt. Not exactly the easiest starting point, because it requires not only the knowledge of the genre but also excellent musical skills, particularly if the guitar is your key instrument. Luckily, the duo possess both the musical knowledge and ability to play such music, which they do with both grace and confidence, enough for them to come up with their own quality material like "A History on Lost Art."

But they don't stop there. They bring in elements of other musical styles—blues ("Petty Tom Blues"), Bossa Nova ("Chiquitita" and the title track), Mexican folk ("Maria"), chanson ("Falling in Love") and even more. They actually layer their songs with elements and let you keep discovering what more hides within. They round it all up to present confident, assured playing and music that both sticks to the 'rules,' but also bends them with quite a dose of imagination.

You’re the Star; Chiquitita; I’ve Already Got Me A Man; Gonna Make A Fool Outta You; A History on Lost Art; Maria; Petty Tom Blues; Falling in Love; Sailor Song; Worse Than Worse; Minutia; How Do You Do; Leaving Today; No More Second Guessing

Title: You're The Star | Year Released: 2019 | Record Label: Self Produced