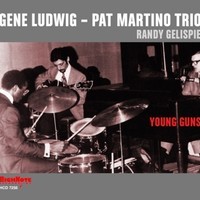 The name Young Guns seems ironically amiss until one learns that this recording dates from 1968-69 when organist Gene Ludwig was thirty years old, guitarist Pat Martino twenty-three and drummer Randy Gelispie somewhere in that neighborhood, long before he became fondly known as "Uncle G." The organ trio was in its heyday then, and this one was caught on tape during an exciting live date at Club 118 in Louisville, KY. How many other such performances have been lost forever owing to the absence of a tape recorder or the failure to turn it on is anyone's guess. But this one, thank goodness, has been preserved for present-day ears to appreciate.

Ludwig, an admirer of Jimmy Smith and forerunner of Joey DeFrancesco and other Hammond masters, sprays bluesy notes and ideas all over the landscape, while Martino, a lyrical machine, has the proper phrase for every occasion, whether rushing quickly forward or simply hanging loose. Gelispie, a splendid soloist when his number is called, serves as the trio's rhythmic anchor, deftly shaping the time as Ludwig and Martino zigzag around and through it. To put it another way, all three are at the top of their respective games.

This is clear from the outset, a fast-moving rendition of Leslie Bricusse / Anthony Newley's "Who Can I Turn To?" Everyone is smoking on that one, and even more so on the usually even-tempered standard "Close Your Eyes," wherein the accelerator is pressed to the floor and the trio burns some serious rubber. The pace slackens to a degree on Wes Montgomery's groovy "Road Song," then resumes apace on Martino's animated finale, "Colossus." Leading the threesome there are John Coltrane's engaging "Mr. PC," Milt Jackson's funky "Sam Sack" and Michel Legrand's "Watch What Happens," a gentle samba that is as close to a ballad as anything the crew undertakes.

Even more than forty years onward, the themes sound fresh and charming, thanks to the commingled talents of Messrs Ludwig, Martino and Gelispie who underscore the premise that good music is always in style. Even though the Young Guns no longer answer to that name, they leave no doubt in this colorful scrapbook why it was once very much their province.

Track Listing: Who Can I Turn To?; Mr. PC; Sam Sack; Watch What Happens; Close Your Eyes; Road Song; Colossus.