Alexis Cole with One For All: You'd Be So Nice To Come Home To

By DAN BILAWSKY
February 24, 2018
Sign in to view read count 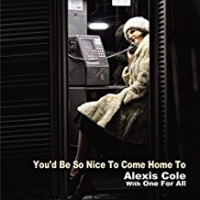 Vocalist Alexis Cole hasn't found a setting or theme that doesn't suit her. Since arriving on the scene near the turn of the century she's covered a tremendous amount of ground and delivered a good number of well-conceived and beautifully executed albums. Cole teamed up with dozens of A-listers for a charitably-driven Christmas outing, explored the sultry side of the jazz canon, gave voice to the music of baritone saxophonist Pepper Adams, put her own spin on Paul Simon's work, shined a light on love songs associated with Disney films, and partnered with guitar icon Bucky Pizzarelli for the classiest of gatherings. And that, believe it or not, is just the highlight reel. She's made it clear that she's not one to repeat herself—no two albums from Alexis Cole are alike—but that's not to say her catalog lacks any ties that bind. Cole's sophisticated yet relatable delivery carries across all of her music, including this winning date.

You'd Be So Nice To Come Home To finds Cole joining forces with hard bop-leaning sextet One For All. Together, they charm with a program of tried-and-true classics laced with individualistic sentiments. In "Golden Earrings" we're given bright swing and real heat as Cole tells and sells the tale. Trumpeter Jim Rotondi circles around her with muted obbligato work, and a number of soloists—trombonist Steve Davis, tenor saxophonist Eric Alexander, and pianist David Hazeltine—take the baton and run with it. Then there's an unusually sly "I Will Wait For You" that leaves just a hint of doubt in its tone, a "Moon River" stripped of cloying sentiments and recast as a 4/4 swinger, and a "Cry Me A River" elevated through Cole's world-wise delivery. All of those numbers indicate that nobody involved with this album is content with delivering cookie-cutter performances.

Every one of these songs is shaped in a way that makes them hard to let go of, but each is also followed by something taken happily as a replacement. For example, an "Alone Together" propelled by Joe Farnsworth's drumming and enlivened by horn interjections behind and around the vocals leads to a take of "A Beautiful Friendship" with a million dollar rhythmic feel and an endearing atmosphere. Then that leads to an "All The Things You Are" with a few Latin mini-detours and notable contributions from bassist John Webber and that brings the listener to a "So In Love" toying with the oh-so-complicated nature surrounding the titular four-letter word. It's only in the album's conclusion that the ears are finally left without a suitable follow-up.

Alexis Cole and One For All somehow manage to leave us completely satisfied while also wanting more. That's the mark of a fine album, and that's proof that this one is most certainly nice to come home to.

Golden Earrings; I Will Wait For You; Moon River; Delilah; Cry Me A River; Alone Together; A Beautiful Friendship; All The Things You Are; So In Love; You've Changed; You'd Be So Nice To Come Home To.