The Trophies: You Wait To Publish

By MARK CORROTO
December 20, 2013
Sign in to view read count 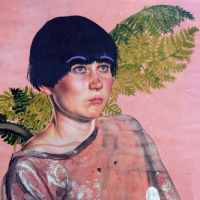 Alessandro Bosetti reshuffles the distinctions between speech and song with his repeating texts. His scripts of found words, nonsense passages, or snippets of conversations, when presented as a loop, take on new and disparate meanings. With his trio Trophies, the repetitive speech loops expand as drummer Tony Buck (The Necks) and guitarist Kenta Nagai (Laura Andel Orchestra) 'speak' instrumental lines into the vortex of Bosetti's loops.

You Wait To Publish follows A Color Of A Horse (D.S. al Coda, 2010), and Become Objects Of Daily Use (MonoType, 2011) where Buck replaced drummer Ches Smith.

The title track, another non sequitur of found text, can be read as simple flapdoodle, but animated by the trio, plus trombonist Hilary Jeffrey, it becomes something else altogether. The track coils the texts around and around, picking up intensity. The loop becomes a helix of word and sound. The transcriptions of speech by Bosetti are cast back at him by Nagai, his doppelganger. The guitarist can mimic speech, shred notes, or paint landscapes. With Buck muscling beats, "What Happens To Break this Cup" shapeshifts from simple meaningless texts into a war chant—a rallying call similar to Talking Heads leader David Byrne chanting "same as it ever was" from "Once In A Lifetime." The compulsive nature of this music is intoxicating. "Imperial Bath," more word salad, is spoken/sung almost as a clergyman might present a holy text.

For Bosetti, the word might not be sacred, but the repeated speech melody consecrates the sound.

"Ruota di Maggio" finds Bosetti speaking Italian, and his delivery of text is not transcribed, but accompanied by a treading Buck and a commenting Nagai. The effect remains hypnotic. Same for the wordless "I Have Been Waiting," where electronic keyboard replaces Bosetti's words. The loop of sound, like the word loops, delivers the same mesmerizing effect.

You Wait To Publish; I Have Been Looking; Matta Clark; Ruota di Maggio; What Happens To Break this Cup; Imperial Bath.