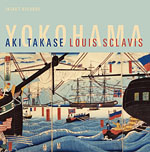 Aki Takase is making a real burden for herself with this the latest in her hopefully ongoing series of Intakt releases. With every successive one it's not just a simple matter of the quality going up but rather a matter of different facets of her ability being revealed. As these releases have all been documents of duos, the effect is almost rhetorical, as if she's intent on making a case for that sparse setting and what can be achieved in it.

There's diversity within that body of work too, just as there is within this program. Louis Sclavis' modest raft of reeds is as fulfilling a foil for Takase as any of her previous partners, and the duo covers a broad musical range with aplomb. "Yokohama" is both lyrical and unworldly, the latter quality exemplified by Takase's work under the piano lid. On bass clarinet, Sclavis exhibits a purity of tone which sets him at odds with the obvious precedent of Eric Dolphy.

On soprano sax, as he is on the brief "Shower," Sclavis is also something else. This straight horn is so rife with precedents in the realms of the free and the near free that Sclavis' ability to avoid them all is a feat in itself. There's a truth about the dialog here that belies the perhaps casual nature of improvised music and, in just over two minutes, the duo makes as potent a case for it as anyone could hope for.

The impressionism of "Raw Silk" conjures up an odd parallel with the chamber works of Claude Debussy through the way in which the duo seems to flirt with a melodic line even while it subjects it to all sorts of subversion from beneath in a manner that the French composer would never have entertained.

In a way Sclavis proves why he's so amenable to the ECM label's production methodology on "Le Temps D'Apres," but as it turns out there's whole lot more than surface sheen to this music, even while the duo gets as close as they ever do here to the conventional roles of soloist and accompanist.

On "Ligne De Fuite," they work a seam that's equal parts serial music and the work of the Jimmy Giuffre trio with Paul Bley and Gary Peacock. The end result is happily dissimilar, however, with both players asserting their individuality in a fashion only music as rarefied as this perhaps permits. As elsewhere, the ear is rewarded and the intellect stimulated in a fashion that's far from common.